The right way to write

Freelance journalism not for the laidback

“This book is filled with practical advice and real life examples from two journalists who have written for the biggest and the best. Editors from The New York Times, The Guardian and Forbes, among others, tell you how to succeed in the business”

“(The book) covers a wide range of topics, from the qualities needed to be a successful freelancer, to pitching, following up with editors, writing the feature and negotiating for payment. We also have a section on writing for the foreign media and writing on specialist areas such as travel, food and business. We hope it will be useful for everyone from absolute beginners to seasoned pros who want to take their career ahead, and perhaps target higher paying markets.” 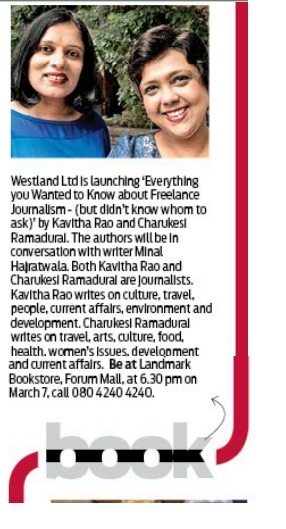 – A canopy bridge for wildlife
~ The Christian Science Monitor