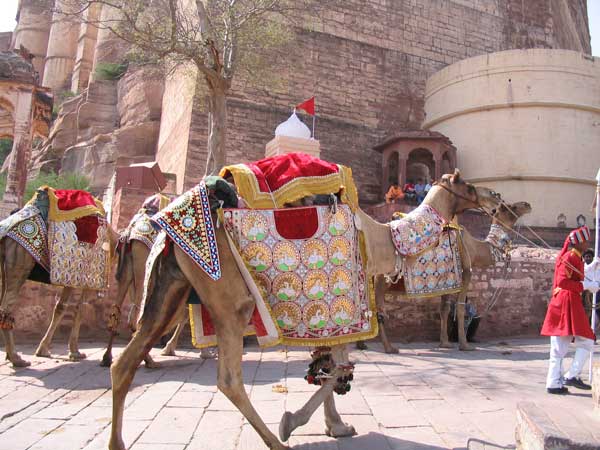 ***
Who would have thought kitsch could be so charming? The first evening of our stay at Jodhpur, when I venture into Mandore Gardens for the inauguration of the annual Marwar Festival, I do not have very high expectations. Blame it on everything I have read about it so far – glorious tradition, heritage, brave warriors of Rajasthan – the clichés had flown fast and furious at me. At Mandore, a hundred monkeys – locals – are waiting along with the tourists – outsiders – for the performances to begin, munching in a distracted fashion on the peanuts thrown their way. To pass the time, they eye our cameras and play hide and seek behind the trees that have grown in profusion all over the garden.

As the sun sinks into the desert that borders the city of Jodhpur and the evening turns mellow, the visitors get more and more restless. Suddenly in the middle of the noise, the first singer raises her husky voice to the tune of Rajasthan’s anthem, padharo mharo desh – welcome to our country – and a hush descends on the edgy crowds. The next three hours fly past. And I am sold. Bring on more of the glorious tradition!

And so the next morning I step out into the mild early winter sunshine and head towards the main town square where we have been told the parade is to take place. The place is empty but for a group of young boys who have assembled there, holding their camels by short ropes. Slowly people start lining up the sides of the street and the first horse carriage crosses us, with pretty young girls dressed in colourful lehngas waving out to people with a smile. Following them is the pied piper of Jodhpur in resplendent purple silk and just behind him, dancers on their wooden horses, along with their music troupe, all on moving carts. However, the most picturesque venue for the festival, indeed the most picturesque spot in Jodhpur, even when there is no festival is the Mehrangarh Fort. The heart of what was the fortified city of Jodhpur, Mehrangarh was built in 1459 by Raja Rao Jodha (after whom the city is named). In a state where every few hundred kilometres boasts of a fort, Mehrangrah is still something special, seeming to rise as it does out of thin air. You crane your neck up at the hill, and suddenly, somewhere out of the middle, the fort sprouts up, reaching into the skies. Or so it seems from the perspective of one standing at the bottom. We stick as close to the walls as possible on the narrow lane leading up to the fort, as silk-caparisoned elephants and camels amble past, moving their heads slowly to some inaudible music. Since we are ‘captive audience’ then, the vendors along the path take this opportunity to sell us everything from tea spices to agarbatti, proudly calling out their USP that is anyway displayed on boards in front of their shops – Recommended by Lonely Planet. As we huff and puff our way up the steep cobble-stoned path, we stop at the edge to catch our breath, taking in the magnificent view of the city spread out beneath, like a deep blue blanket. Jodhpur may be called the blue city after the predominant colour of the dwellings, but it is the earthy browns of Mehrangarh that stay with you long after you leave Jodhpur. Inside the fort premises, most of which has been converted into a museum, we take in centuries of Marwar culture, preserved through murals and musical instruments, swords and daggers, costumes and cradles. And in the middle of the gold and browns, we catch a sudden glimpse of the jaali work on the windows, the broken coloured glass casting brilliant reflections on the floor. Just outside the palace, there is a continuous buzz; we find out later that it is a folk music competition for visitors who want to take a break from the monotony of shopping from makeshift stalls set up for the festival inside the fort complex. And unmindful of all this sits the Korean artist, sketching the contours of a local musician who poses with his musical instrument, the resignation caused by years of tough life on desert land etched on every line of his face. After a whole morning spent at the fort, we head out to Osian in the evening, where the desert spreads out as a never-ending sea. And for those whose appetite for local culture has not been satisfied, Osian is also a venue for some of the festivities, and music in the stillness of the desert is an experience not to be missed. Visitors who have made the long dusty trip can also take in the splendour of the Osian Jain temples, many of them now in ruin, or recover by simply staring at the sun setting out in the desert.

Or you could just do what is most joyful in a place like Jodhpur; amble round the streets aimlessly and try hard not give in to the temptation to buy something pretty and colourful from every shop you pass. When you have had your fill of mojris and mirror work bags (if that is ever possible), stop to refresh with piping hot and sinful jalebis and kachoris, with that taste that only local Rajasthani spices can impart. I did all of this, taking in local morning scenes and wondering yet again about the point of my hurried no-time-to-stand-and-stare existence back home. General Information : The Marwar Festival originally known as the Maand Festival, is held every year during the full moon of Sharad Poornima in the Hindu month of Ashwin (September – October). This year, the Marwar Festival is on at Jodhpur on the 25th – 26th of October. The programmes are held at venues across the city: at Mandore Garden, the Umaid Bhavan Palace and the Mehrangarh Fort (more information on the Rajasthan Tourism website).

Jodhpur attractions : As you come out of the Mehrangarh Fort, stop at the white marble memorial of Jaswant Thada, located half way down the fort. The land where Jaswant Thada is located was the traditional cremation ground for Jodhpur rulers, though the cenotaphs were raised only in the late nineteenth century. Also spend a few hours at the Umaid Bhavan Palace, now a hotel and a museum which plays host to the riches of Maharaja Umaid Singh’s family, including a collection of stuffed leopards. 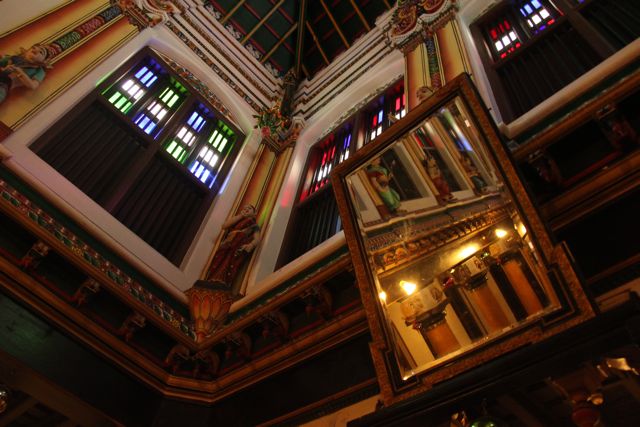 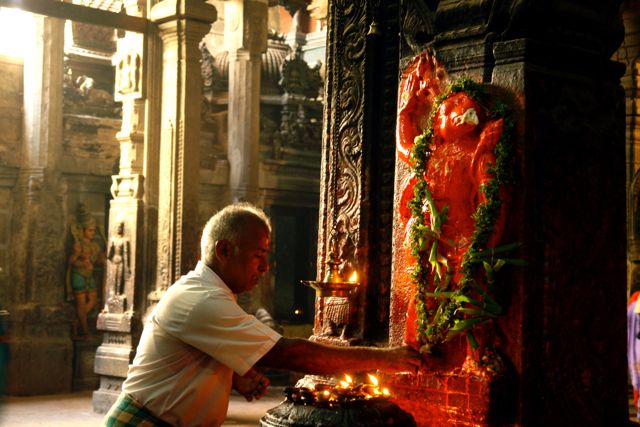 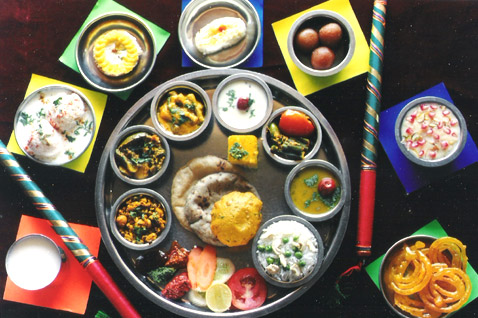