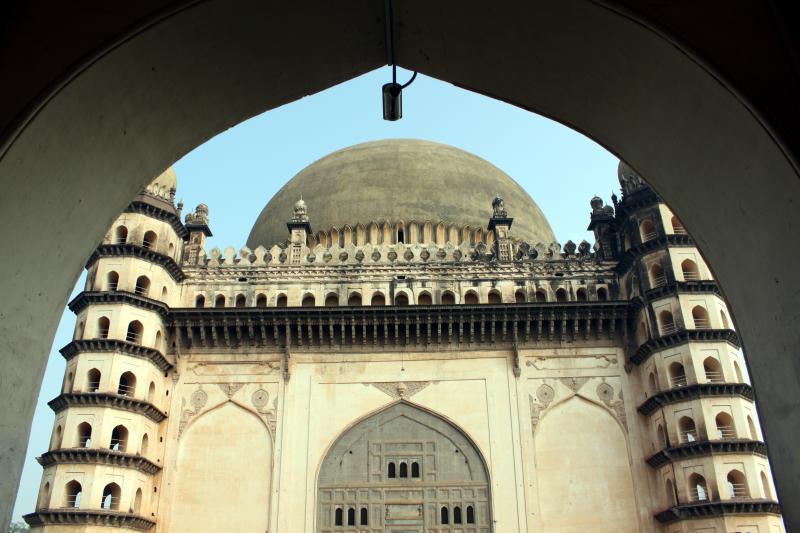 The bunch of teenagers, cheerful in their bright shirts and floppy pants, step into the gallery and stand silent in awe for a few seconds. Just a few seconds. Then one of them shouts ‘ho’ at the top of his voice and the echo is heard all over the quiet monument. And then the cacophony begins; each of them shouting and hooting, thrilled to hear the sounds rebounding across the gallery. After some time, they finally leave, bored of this activity and I have the place to myself for a few minutes. I remember hearing these noises earlier too when I was at ground level walking around the tombs, the entire area luminous from the golden light pouring in through the tall windows on either side. Looking up at the source of the noise, the dome appears to be a flower with its petals unfurled, the people leaning over the walls of the gallery mere specks. The Gol Gumbaz (literally translated as Round Dome) in Bijapur, built in the mid 17th century is a memorial to Sultan Mohammad Adil Shah of the Adil Shahi dynasty. Its popular claim to fame is that the dome is the second largest in the world – after only St. Peter’s Basilica in Rome. The dome is unsupported by pillars, entirely held by the thick walls of the building, an architectural marvel. And at the base of the dome runs a circular pathway called the whispering gallery. A whisper on one side of the passage is said to be clearly heard on the other side.

However, visitors (as the ones seen earlier) seem to be more interested in hearing their loud voices bouncing off the walls than in testing that claim. It is a wonder that they have the energy to shout after having huffed and puffed their way seven stories up a fleet of narrow steps. It is believed that the Sultan ordered the construction of his own tomb well before his death and oversaw the construction. It was planned in competition with the Ibrahim Rouza, his father’s (Ibrahim Adil Shah II) tomb, with its mosque mirroring the mausoleum. Interestingly, the Ibrahim Rouza is said to have been the inspiration for the Taj Mahal in Agra.

However, the Sultan could not directly compete with his father or even the elegance of the Ibrahim Rouza, and so he chose to outdo it in size. The Gol Gumbaz is therefore a magnificent structure, although plain in appearance since the Sultan died before the monument was completed. Now it houses the tombs of Mohammad Adil Shah, his wives (and mistress) and children. Walking in from the gate, the first structure visible is the Nakkar Khana (drum house) which appears to be a part of the Gol Gumbaz but is actually a museum displaying interesting artefacts from the region. The entire complex is maintained by the Architectural Survey of India (ASI) and is open from 6 a.m. – which is also the ideal time to visit – before the tourist buses and school excursions arrive. Bijapur today is a non-descript town with a majority Muslim population but till the early 14th century, was a Hindu kingdom known as Vijayapura during the reign of the Chalukyas (some sources say the Devagiri Yadavs). There are several mosques and monuments scattered around the town, the most interesting of them being the Jama Masjid, the Ibrahim Rouza ad the Bara Kaman. Bijapur is easily accessed by a direct overnight train from Bangalore.

(Published in The India Tube) 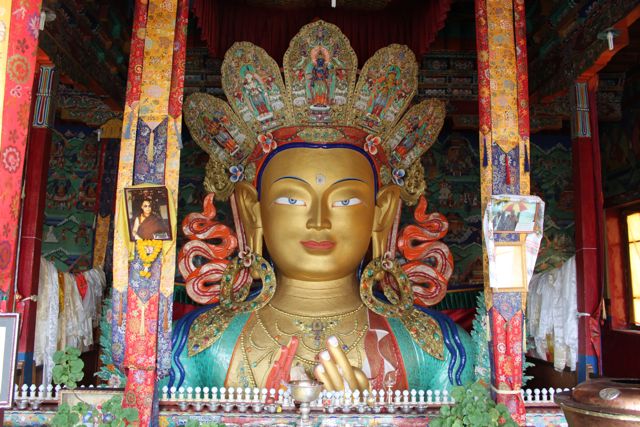 The Swiss Sound of Music

One thought on “The whispering dome”