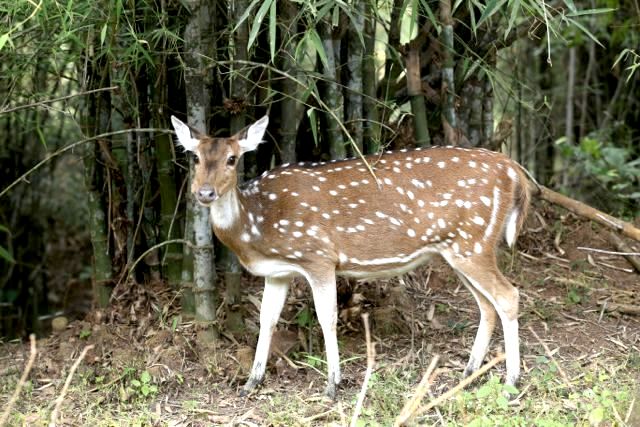 It is a strange feeling, this: half hoping to spot some wildlife and half fearing that I may indeed come across some wildlife. I have never been on a walk inside a forest before and don’t know what to expect.

On a misty winter morning, we have just crossed over the Denwa river into the Satpura National Park. I am the only participant in the walking safari this morning, with six people to guide me through the lush greens and scorched browns of the forest. There are Raju and Anurag, naturalists from Denwa Backwater Escape, where I am staying. There is the official forest guide Lakhan Singh who knows the forest and its multiple, confusing pathways like the interiors of his own home.

And most importantly, there is Lakhan Singh’s lackey; nobody seems to known his name and in turn, he doesn’t open his mouth for the next three hours. He is important because he is carrying the bugle meant to (hopefully) scare away the animals that get too close for comfort. I look around nervously, thinking of all the fauna hiding in the shrubbery, watching this strange procession of humans. “Don’t worry, we have never had to use the bugle even once,” says Lakhan Singh reassuringly.

Oh great, so we don’t even know if this sound is enough to repel a bear on the prowl or a bison in a temper. 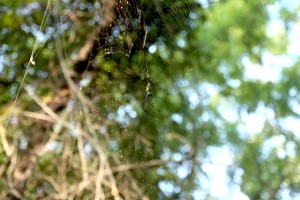 In any case, it turns out that my fears are unfounded. For the first hour of our walk, the forest is absolutely still, slowly stirring to life. We make our way past dry grass, thorny plants and uneven mud paths into thickets where the sunlight is muted.

All around us are the towering sal trees typical to this part of central India and masses of teak trees, constantly calling out to smugglers. And then there are the palash trees, whose flowers (flame of the forest) paint the entire forest a rich shade of red in summer.

At this time, it is impossible to not recall poet Bhavani Prasad Mishra’s ode, where he describes these dense forests as languid, almost drowsy:

Lakhan stops to point out interesting trees and plants; there are over 1200 species in this forest, many of them of great medicinal value. My guides say that locals once knew just the right herb to treat every ailment; from minor indigestion to severe injuries, the forest served them well.

So I learn that the milk that comes out of akona works wonders for swollen joints, when rubbed with warm mustard oil. And that van tambaku is the perfect antidote for dog bites. We walk past harra and bahera plants whose extracts go into popular ayurvedic health potions, mahua trees whose flowers are used to make local liquor and unexpectedly, clusters of lavender blossoms.

And then our first wildlife sighting: a sloth bear digging for food (predominantly ants and termites). Initially, we see only a bent back, till he suddenly looks up on hearing our muffled voices and scampers away into the bushes. We amble on, catching glimpses of giant spiders spinning gossamer webs and wild boars that rush past in a great hurry, as if running late for a breakfast appointment. 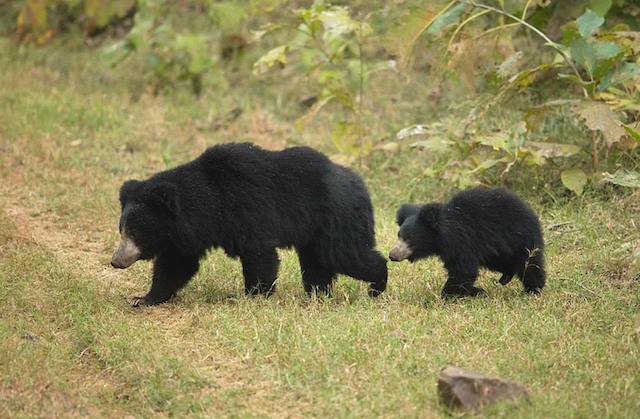 Later on, after our own quick breakfast, we walk by the riverbank to watch chitals drink water, keeping a wary eye out for crocodiles. When the sun comes up in full force, we return to the resort, after an exhilarating three hours in the forest.

Unlike the more popular national parks like Kanha and Bandhavgarh, Satpura is still an undiscovered gem. Apart from the numerous varieties of deer, gaur (Indian bison), wild dogs and jackals, sightings of sloth bears and leopards are common here. So far, it is off the beaten “tiger trail” for most travellers, giving serious wildlife and birding enthusiasts enough time and space to explore its rich biodiversity. 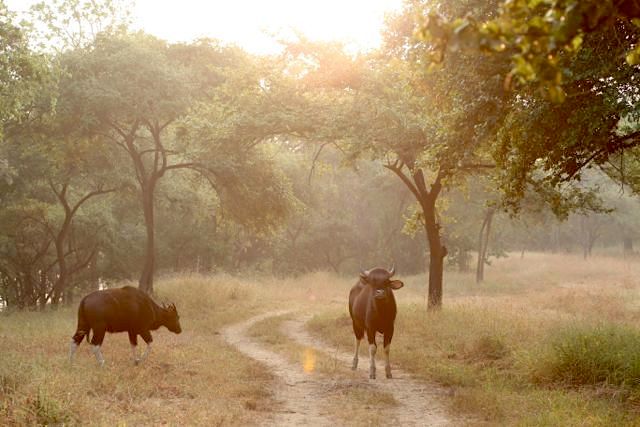 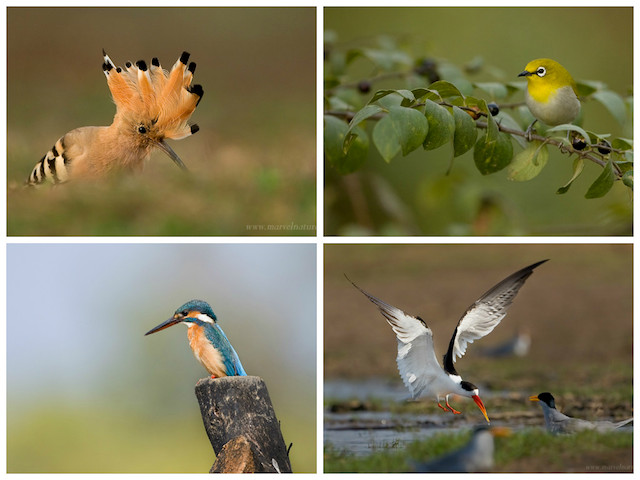 This also means like unlike some of the other tiger destinations, Satpura is not littered with hotels and resorts. Of the handful of luxury options, The Denwa Backwater Resort has an idyllic location, right by the river. The jetty is just a few minutes away and we head for the boat safari one evening.

In the complete stillness of the water, the only sounds are from the avian life: cormorants on top of dead tree branches, white-throated kingfishers fishing for their supper, red-wattled lapwings basking in the mellow evening sunshine, wooly necked storks building a nest for their young and Indian vultures circling high above. 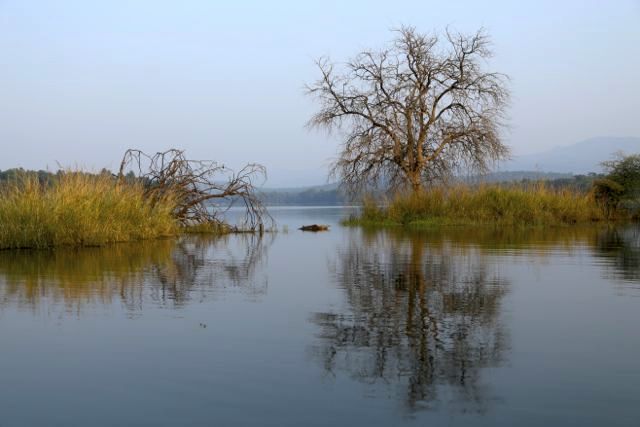 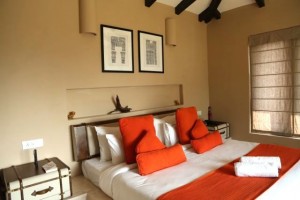 After the boat safari, Raju is in a mad rush to get me back to my room. I cannot afford to miss the spectacular sunset, he insists. And so, from the verandah of my treehouse, I watch the Denwa river turn a molten golden, as fishing boats make their tired way home. Although many of the cottages directly face the river, my room in the treehouse commands expansive views, all the way to the boundaries of the national park across the water.

Satpura National Park gets its name from the surrounding Satpura hills, contiguous with the more famous hills of Pachmahri. The park itself is reached only by boat, a five minute ride across the Denwa. I go into the forest a couple of times on a jeep safari. On these drives, we spot groups of langurs, gaur, chital, sambar deer, and four-horned antelopes.

Our guide, well trained and sharp-eyed, points out a Malabar Giant Squirrel, endemic to this region and now endangered. Its tail, golden brown and bushy, measures nearly two feet in length. I get a glimpse of more sloth bears, this time a mother and cub walking together. There are several alarm calls from the deer and the monkeys, indicating the presence of predators. We stop and wait patiently each time but no leopard or tiger emerges during our forest drives.

Every other activity, however, pales in comparison to the thrill of the night safari organised by the resort. The light fades early at this time of the year and we are driving in pitch darkness. The night safari is in the buffer zone of the forest, which feels just as dense and untamed. As always, an official forest guard accompanies us, standing in the jeep with a powerful flashlight. The only way to spot an animal is by its shining eyes, when the flashlight is focused on it. The drive is exciting, sometimes even scary but totally rewarding, for that feeling of being one with the wilderness. My guide tells me that leopards are often seen on these drives but I don’t seem to have “leopard luck” and find only peacocks, hares and more deer.

Of all the Indian forests I have been to, Satpura has given me the most varied opportunities to explore its beauty. Not surprisingly, this National Park regularly wins awards for being the most visitor friendly wildlife destination. 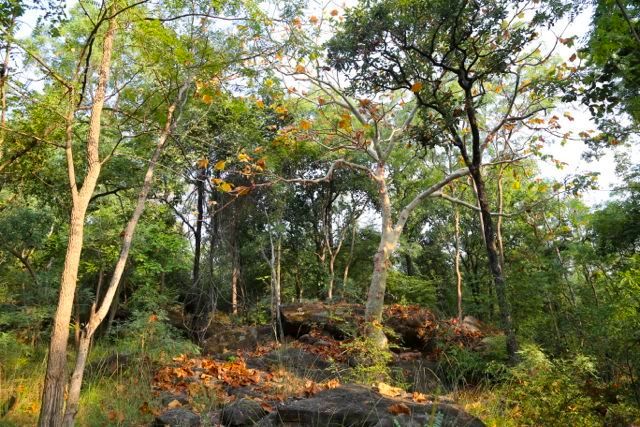 Yet, Satpura sits quietly and patiently, awaiting discerning visitors. As the poem goes:

The grass is still, the thatch is silent,
The sal tree is mute, the flame of the forest is silent…

Getting there: Jet Airways has regular flights from several Indian cities to Bhopal, from where Satpura is roughly 150 km away (three hours drive)

This was published in the January issue of Jet Wings International as Silent Forest, Teeming Life… 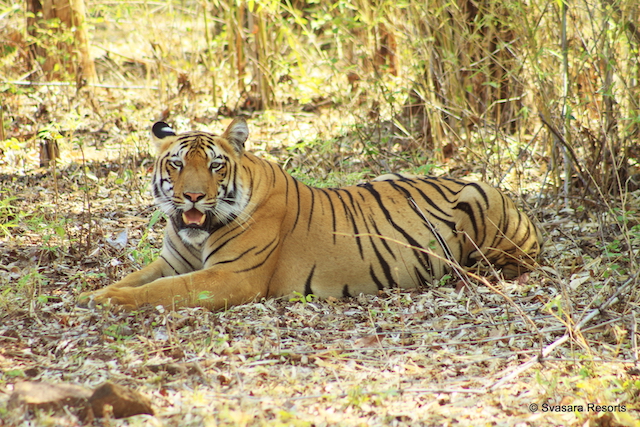 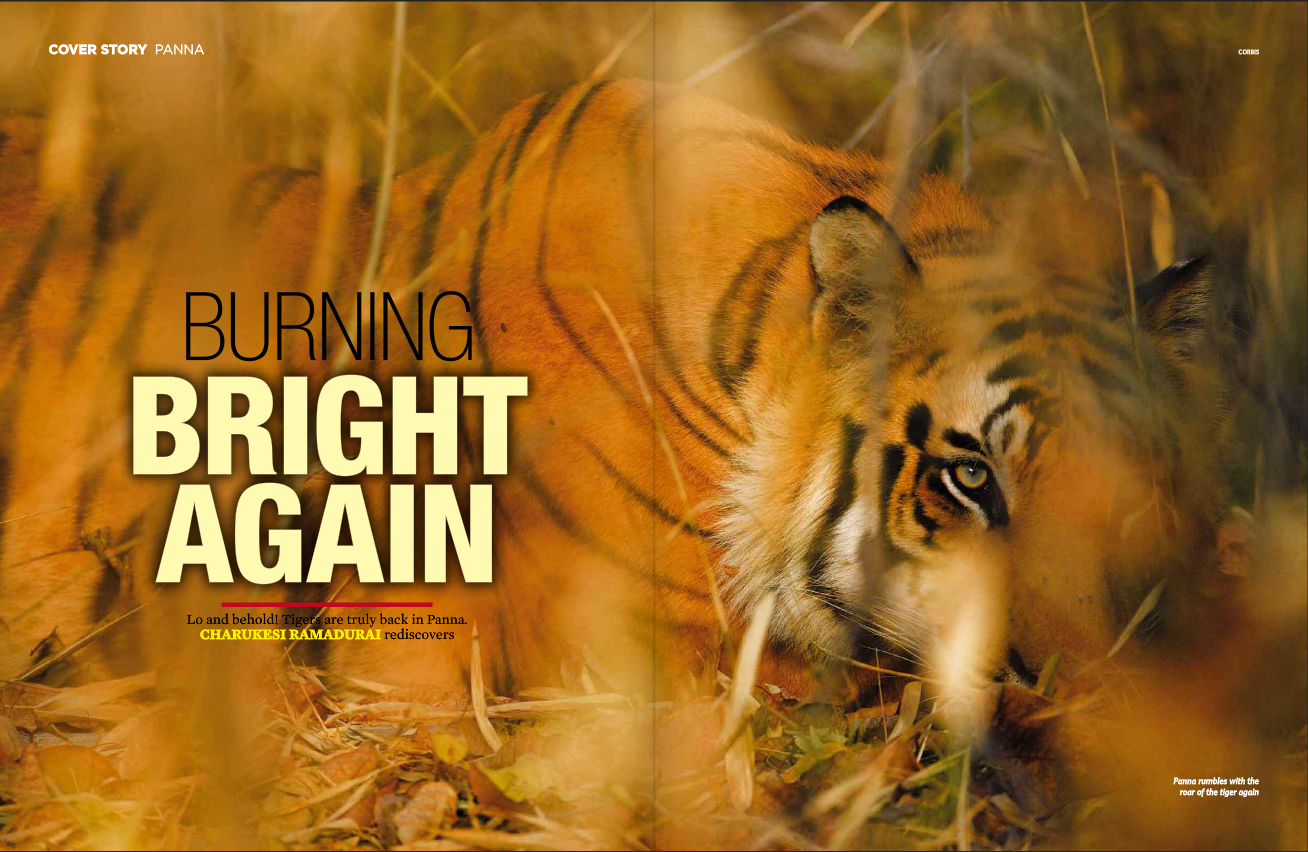