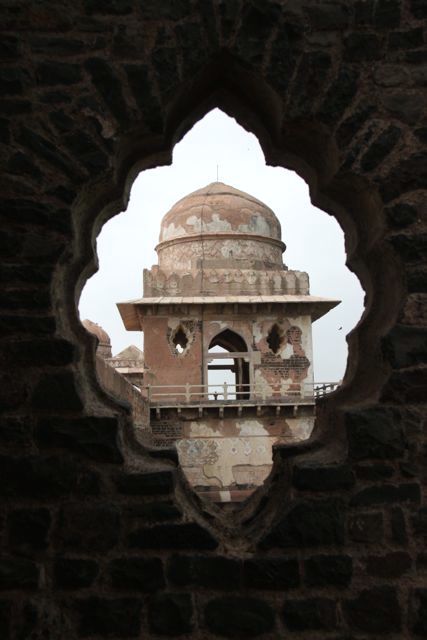 The sky is getting darker, as the storm clouds gather, plump and menacing, carrying with them the faint smell of wet earth. Shivering in the cold breeze, I hug my thin shawl closer around my body and look at the tableau on the terrace. Families are sitting together inside the domed alcoves that bookend this balcony. Groups of local women from the neighbouring villages – perhaps on a day’s outing – are putting up a brave fight to hold their flimsy quick-dry saris in place. Suddenly, the clouds burst open, making them turn around as one woman, and rush for cover inside the monument, silver anklets clinking melodiously, rubber slippers flapping on the stone floor. 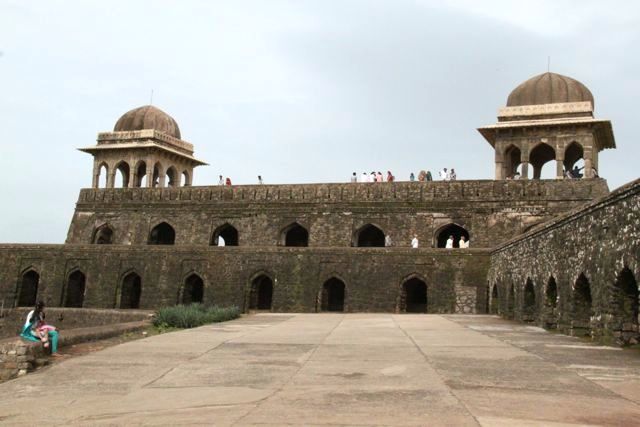 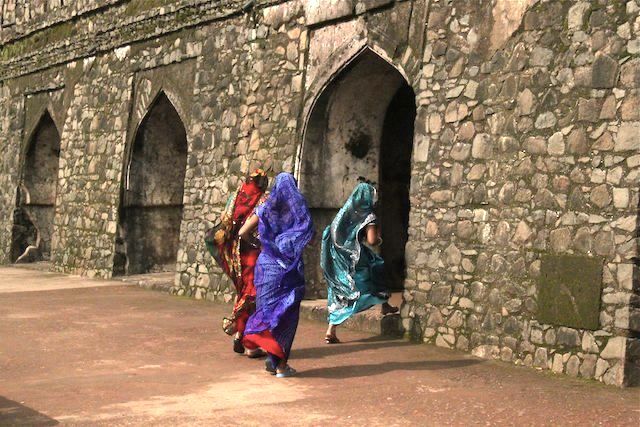 I am at Rani Roopmati’s Pavilion, a three-storeyed building perched prettily on top of a hillock. From a recess in the terrace, I can see the Narmada snaking its way through the arid plains in the distance. The countryside, dotted with brown monuments, comes to life in this unexpected spell of rain.

Apart from an abiding fascination for the Taj Mahal, I don’t much care for the Mughals in general. But in case of Mandu, I have to agree with Emperor Jahangir’s words: “I know of no other place that is so pleasant in climate and with such attractive scenery as Mandu in the rainy season.” No surprise then that this town also served as the monsoon retreat of a succession of Mughals, who sought the cool breezes and green spaces of Mandu.

Once the capital of the Malwa kingdom, Mandu is all about the 16th century love story of a king and a commoner; in this case the ruler of Malwa, Baz Bahadur and a shepherdess Roopmati. The story goes that on a hunting trip, Baz Bahadur caught sight of Roopmati bathing in the Narmada, and captivated by her beauty, made her his queen. It was idyllic for a while, but like all great love stories, this one too ended in tragedy (‘happily ever after’ never makes for exciting history). When captured by Akbar’s general Adham Khan, the king deserted his queen and kingdom. And Roopmati committed suicide by consuming poison.

Despite this less than perfect conclusion, remnants of this romance lie scattered everywhere in Mandu. The Roopmati Pavilion itself, for instance, was built by the indulgent king to ensure that his queen was able to see her beloved Narmada whenever she wished to. However, Baz Bahadur’s Palace, despite its open terraces and luxuriant surroundings, does not carry any whispers of romance. Or perhaps, in my mind, I see the king as a deserter and therefore his palace as devoid of charm.

My guide, no doubt quoting from unverifiable sources, says that Mandu was once a massive fortified city, dating back to the 6th century BC. Today, it is a small dusty town in the heart of India, dotted with monuments and ruins that tell their own stories.

Standing in front of the Jami Masjid, I reflect on the way we talk blithely about global influences. As if we, our generation, thought up the very idea. This mosque, built in the mid 15th century, is modeled after the Ummayad mosque of Damascus; a long way for architectural influences to travel. I love the bleak brownness of it, with bits of blue enamel work peeping out from the walls of the inner chamber. All this brown is contrasted sharply by its neighbour Hoshang’s Tomb, also India’s first marble structure. 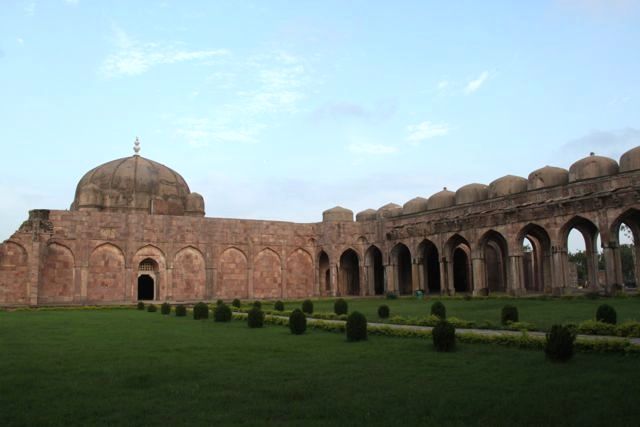 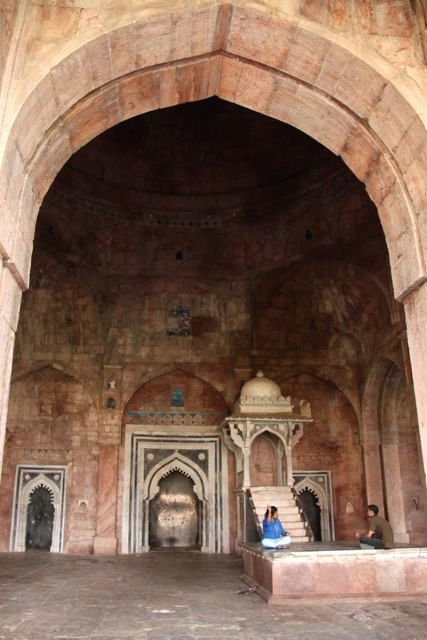 At first glance, this domed monument seems plain but I walk past beautiful pink granite pillars to the other side – the main entry into the tomb – and notice the intricate latticework on the windows. This tomb is supposed to be a fine example of a marriage between Indian and Afghan styles of architecture. Here again, the Mughal presence makes itself felt; it is said that Shah Jahan drew inspiration from this tomb for the Taj Mahal. 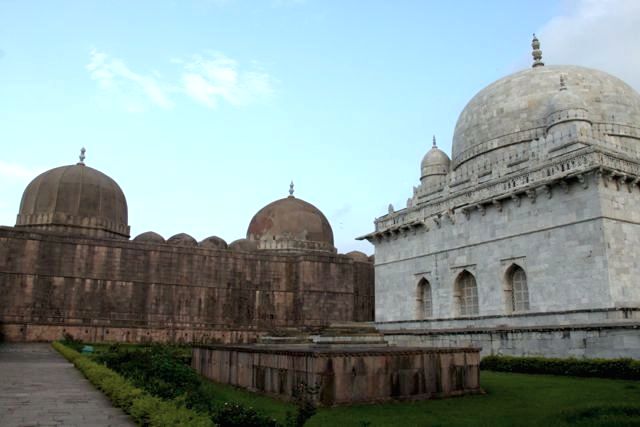 However, the place I return to again and again is the Royal Enclave – built around the same time – containing the Jahaz Mahal and the Hindola Mahal. While entirely willing to be charmed by Mandu, I still find it a stretch of my imagination to see a ship (Jahaz Mahal) and a swing (Hindola Mahal) here. But these monuments are the highlights of Mandu, adorning all the picture postcards sent out of here. 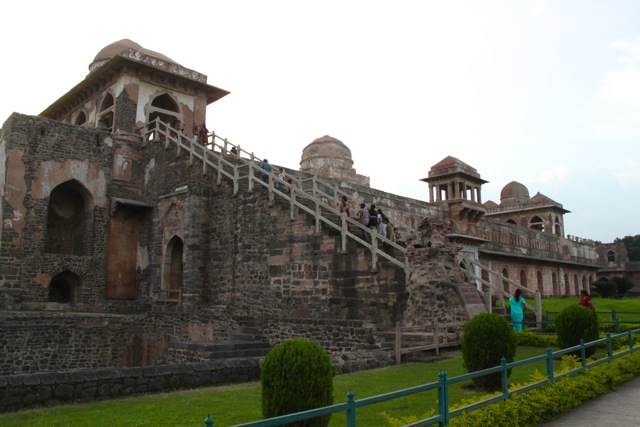 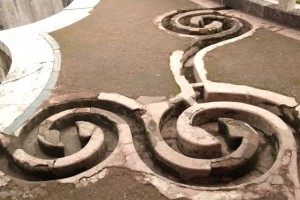 Jahaz Mahal is 120 metres long and sits between two artificial lakes, the Munj Talao and the Kapur Talao. During the monsoons, the palace feels afloat – like a ship – between the two full lakes. Seeing the barebones structure that exists today, it is tough to believe that it once served as a “pleasure palace” of Sultan Ghiyas-ud-din-Khilji, housing his harem of over 15,000 women. The only embellishments on the open terrace are the small domed pavilions and intriguing water channels on the floor. The Hindola Mahal is similarly stark, with graceful arches and sloping outer walls, and perhaps sways gently in the calming monsoon breeze. 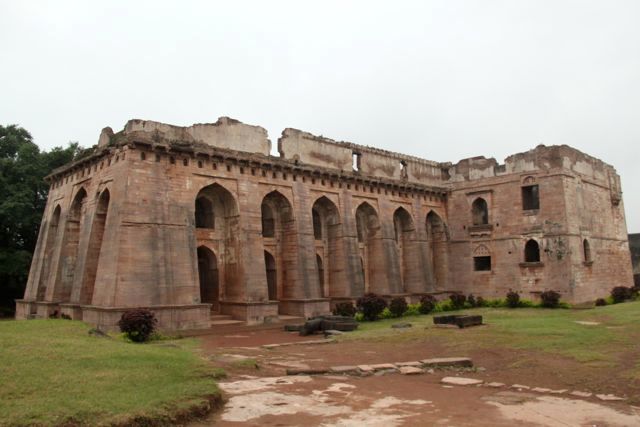 After a couple of days in Mandu, I head to Maheshwar, just an hour’s drive away. If Mandu feels like a place from the past; Maheshwar is very much here and now. Life in this town revolves around the ghats of the Narmada; gossiping local women wash their clothes, boatmen call out to tourists for pleasure rides, priests fill river water in their little round vessels and tourists record their visit for posterity on phone cameras.

Despite the many temples in the town, the undisputed goddess here is queen Ahilyabai Holkar, who governed this territory in the mid 18th century. The fort she ruled from is now a heritage hotel and the palace or Rajwada, a small unassuming space filled with a quiet charm, much like the town itself. 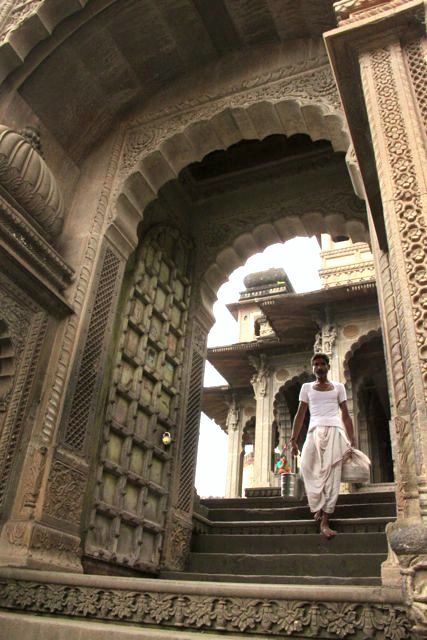 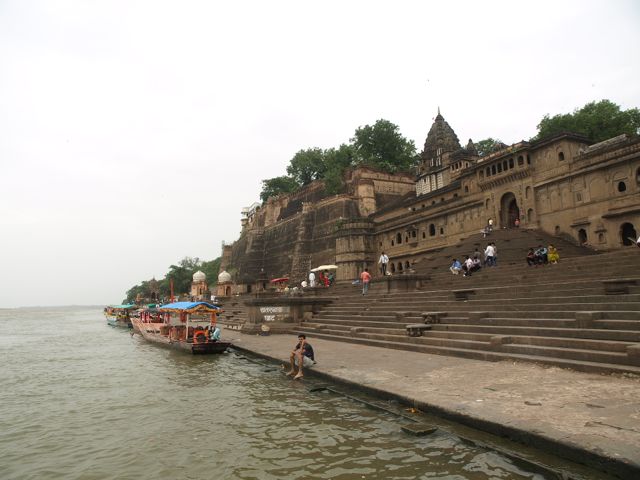 But the star of Maheshwar is the gossamer fabric that lends itself to beautiful saris that carry the town’s name. The art of weaving Maheshwari saris was introduced over two centuries ago by the queen and revived two decades ago by her descendants. There are now over 2000 weavers skilled in this art, which came close to dying out. 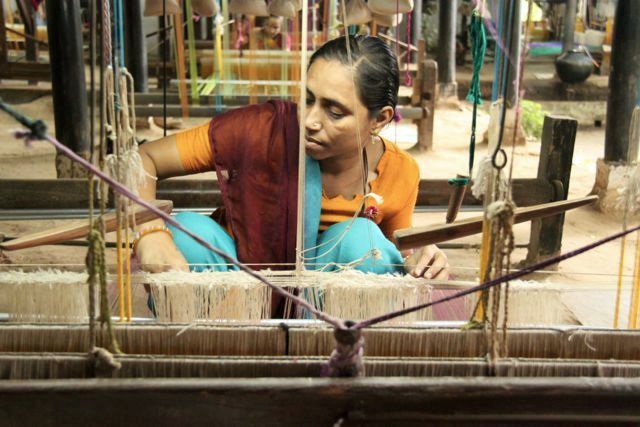 After an hour at the ghats and a quick stop at the Shiva temple on the shore, I make my way to the Rehwa Society Store inside the fort complex. A dozen women are at work here, silent and focused, the stillness broken only by the movement of the looms. Some of them look up and smile as I point my camera at them; to others, I am only a mild annoyance. And in the shop, each sari looks more enticing than the other, and I walk out with far more than I had intended to buy.

Back at the Jahaz Mahal at sunset, I think of the various avatars this overgrown village has seen over the centuries: Mandapadurga, Mandavgarh and now Mandu. My favourite name though, comes from the late 13th century: Shadiabad, or ‘City of Joy.’

Jet Airways has regular flights from Mumbai and Delhi to Indore, from where Mandu is 90 km (2 hour drive) away.

The best options in Mandu are the government-managed Malwa Resort and Malwa Retreat. For a more upscale experience, choose Jhira Bagh Palace on the Indore Highway. At Maheshwar, stay at the Ahilya Fort. 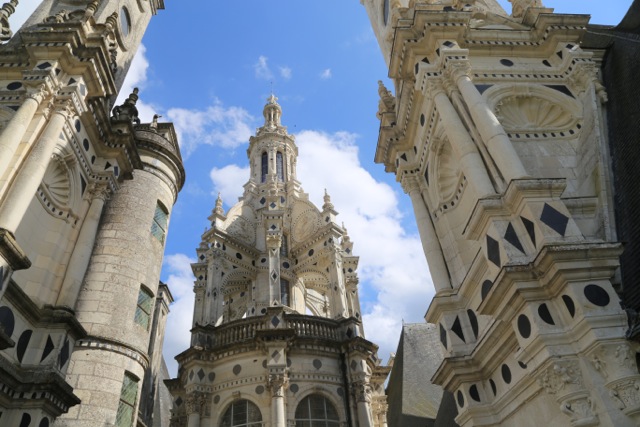 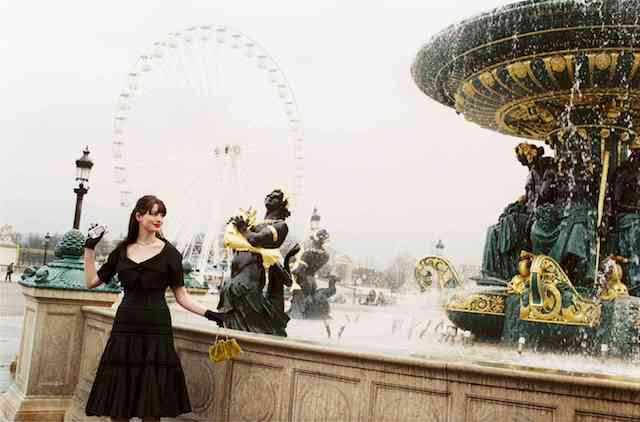