I know you are thinking that there has been too much of Hampi in this blog – but that is a place that truly keeps calling me back – but this is the last one, I promise. I had written a short post on the Virupaksha temple a while ago on this blog – this longer piece was published today in BRUNCH – the Sunday supplement of Hindustan Times as ‘Written in Stone’ (the link is valid only for a week – so this is the published piece in full). 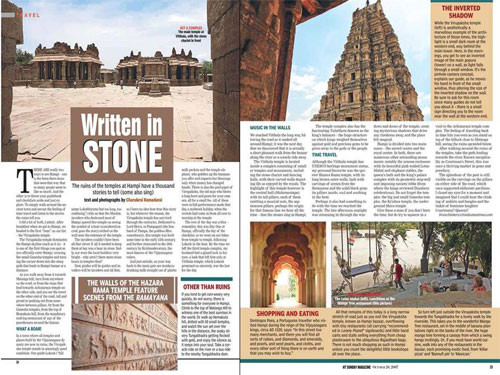 There are really two ways to see Hampi – one is the been-there-done-that-seen-that way that so many people seem to like so much. And the other is to throw your guide book and checklists aside and explore, savor the feeling of time travel and listen to the stories the ruins tell you. I did a bit of both, I admit. When we reached, Hampi was celebrating Independence Day with the gusto that only small-town India can muster – kids at the local primary school listlessly going through the motions of march-past, the tricolor fluttering gaily everywhere. Breakfast done at a non-descript restaurant on the bazaar road, we headed to the first “item” on our list – the Virupaksha temple.

The Virupaksha temple dominates the Hampi skyline (such as it is) – it is one of the first things you spot as you officially enter Hampi, crossing the small Ganesha temples and turning the corner down into the steep path that leads to Hampi bazaar at a distance. As you walk away from it towards Matanga hill, turn from anywhere on the road, or from the steps that lead towards Achutaraya temple on the other side, and you see the tower on the other end of the road, tall and proud or peeking out from somewhere between pillars. Or from the Ganesha temples, from the top of Hemakuta hill, from the mandatory roof-top restaurant of any of the guesthouses around the bazaar.

In a town where all temples and places built by the Vijayanagara dynasty are now in ruins, the Virupaksha temple stands in amazingly good condition. Our guide Lokesh “full name Lokabhirama but too long to confusing” tells us that the Muslim invaders who destroyed most of Hampi, spared this temple on seeing the symbol of a boar (considered sacred, goes the story) etched on the wall near the entrance of the temple. The invaders could not have been all that clever if all it needed to keep them at bay was a boar in stone. Sadly, nor were the local architects and builders very clever – why aren’t there more stone boars in temples then?

Now guides will be guides and invaders will be invaders and all that, so I have no idea how true this story is, but whatever the reason, the Virupaksha temple has survived through the centuries. Dedicated to Lord Shiva, or Pampapati (the husband of Pampa, the goddess Bhuvaneshwari), this temple was built some time in the early fifteenth century, and further renovated in the sixteenth century by Krishnadevaraya, the most famous of the Vijayanagara rulers.

And just outside, on your way back to the main gate are monkeys drinking milk straight out of plastic milk covers and the temple elephant, who gobbles up the bananas you offer and imparts her blessings only when money has changed hands. There is also the pied-piper of Virupaksha, the old man who blows this long horn and poses for your camera, all for a small fee. All of them were in full performance mode that day, a midweek holiday when the crowds had come in from all over to worship at the temple.

The rest of the day was a blur – remember, this was day one at Hampi, officially the day of the checklist; so we went on our bikes from temple to temple, following Lokesh in the August heat. By the time we left the third temple complex my husband had a glazed look in his eyes, a look that left him only at Vitthala temple, which Lokesh promised us sincerely, was the last for the day.
We reached Vitthala the long way, following the road as it snaked all around Hampi; it was the next day that we discovered that it is actually a short pleasant walk from the bazaar along the river or a coracle ride away. The Vitthala temple is located inside a complex consisting of smaller temples and monuments, including the stone chariot and dancing halls, with their carved walls depicting life as enjoyed by the royals. The highlight of this temple however is the central hall (Mahamantapa) with its tall pillars, each of them emitting a musical note, the saptaswara pillars, perhaps the origin for that famous line we hear all the time – that the stones sing in Hampi. The temple complex also has the fascinating Tulabhara (known as the king’s balance) – the huge structure on which kings weighed themselves against gold and precious gems to be given away to the gods or the people.

Although the Vitthala temple has UNESCO heritage monument status, my personal favorite was the quieter Hazara Rama temple, with its long brown outer walls, lush with carvings of scenes from the Ramayana and the solid black granite pillars inside, cool and soothing in the heat. Perhaps it also had something to do with the time we reached the temple, the late afternoon sunlight streaming in through the windows and doors of the temple felt magical, creating mysterious shadows that drive any tiredness away.

Hampi is divided into two main zones – the sacred centre and the royal centre. In both, there are numerous other astounding monuments : notably the zenana enclosure with its beautiful pink-walled lotus mahal and elephant stables, the Queen’s bath and the King’s Palace complex with it geometric step-well and imposing navami tibba (from where the kings reviewed Dusshera celebrations) – and temples : the big and small Ganesha temples, the Krishna temple, the underground Shiva temple.

Give these a miss if you do not have the time but do try to squeeze in a visit to the Achutaraya temple complex. The feeling of traveling back in time hits you even as you stand on top of the hillock close to Matanga hill, seeing the ruins sprawled below. After walking around the ruins of the temples, take the path leading towards the river. Known inexplicably as Courtesan’s Street, this was once a thriving market in gems and jewellery. The splendor of the past days is still visible on the carvings on the pillars on either side of the road, which once supported elaborate pavilions. I closed my eyes for a moment and imagined that I could hear the clinking of the anklets and bangles and the tinkle of feminine laughter. Courtesans? Queens?

If you are not particularly interested in history or tend to get ruin-weary very quickly, do not worry; there is something for everyone in Hampi. Climb to the top of Matanga Hill to witness what Lonely Planet describes as one of the best sunrises in the world. Or walk up Hemakuta hill, dotted with fifty small temples, close to Virupaksha temple, watch the sun set over the hills in the distance, the snaky silvery Tungabhadra getting flecked with gold, and enjoy the silence as it seeps into your soul. Take a coracle ride on the river or a bus ride to the nearby Tungabhadra dam.

Domingos Paes, a Portuguese traveler who visited Hampi during the reign of the Vijayanagara kings, circa AD 1520 says – In this street live many merchants, and there you will find all sorts of rubies, and diamonds, and emeralds, and pearls, and seed pearls, and cloths, and every other sort of thing there is on earth and that you may wish to buy. All that remains of this today is a long narrow stretch of road just as you exit the Virupaksha temple, known as Hampi bazaar, overflowing with tiny restaurants (all carrying “recommended in Lonely Planet” signboards) and little hand carts and stalls selling everything from cheap plasticware to the ubiquitous “ethnic” Rajasthani handbags. (As an aside, isn’t it a wonder how beauty is unique where it is found, whereas kitsch is the same everywhere?) There is not much shopping as such in Hampi unless you count the delightful little bookshops all over.

Alternatively, you can turn left just outside the Virupaksha temple towards the Tungabhadra for a lovely walk by the riverside. More importantly, it takes you to the wonderful Mango Tree restaurant, set in the middle of banana plantations right on the banks of the river, the huge mango tree forming a canopy from which a swing hangs invitingly. Or if you must have world cuisine, walk into any of the restaurants in the bazaar, each promising more and more exotic food, from Killar pizza and Bannufi pie to Maxican and Chinesn food.

Take the convenient overnight train from Bangalore to Hospet and an autorickshaw on to Hampi. By road, it takes about eight hours to reach Hampi and the route is good almost throughout. Inside Hampi, it is possible to cover most of the sights by walk or on rented bicycles and bikes. Autorickshaws are available freely near the bazaar and can be hired for the day to take you around. You can stay in Hampi (highly recommended, for the town is magical at night, once the heat and bustle of the day has wound down) in one of the small but comfortable guesthouses or at Hospet if you definitely need star hotel comforts.

11 thoughts on “My heart is in Hampi”