There is something about high altitude lakes – you climb up the mountains roads, gritting your teeth though the hairpin bends and unpaved surfaces and all. And then suddenly from a height, a gleam of water, a patch of brilliant blue, or silvery white speckled with gold, depending on the mood of the sun that day… Sikkim has several such lakes, many of them held sacred by locals and therefore are places of worship as well as tourism.

Elephant lake was not in the original agenda – we chanced upon it after being turned away from the road to Nathu La just four kilometers ahead of the border, thanks to a landslide. Our driver took us ahead, on the insistence of been-there-done-there fellow passengers to the Baba bunker – the small memorial temple to Baba Harbhajan Singh (along roads maintained by the intrepid Border Roads Organization), with ominous signboards warning – you are being observed by the Chinese army – or something to that effect – the feeling of being sitting ducks is never stronger! There you are, on exposed steep mountain roads, and you are told the Chinese are watching you from their hidden posts! And so we headed on further up till the Elephant lake – with our jeep driver offering a “prize for guessing what the shape is”… 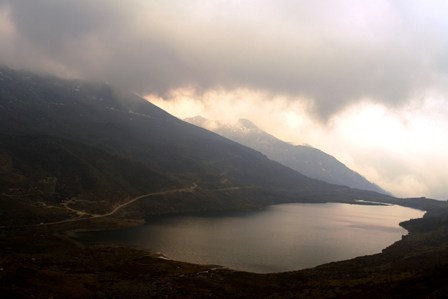 Called Changu by locals, Tsomgo lake is one of the must-dos from Gangtok. At a height of over 12000 feet, the lake at the lap of snow-covered mountains, remains frozen during the winter months. The snow has all but melted in May, and the view of the lake from a height is much more attractive. Guidebooks says it is held to be sacred by locals, but the scene as we reach the lake is far from sacred or serene. Yaks by the hundreds are being led by their owners who offer tourists short rides along the lake; the animals themselves indifferent to all the chaos, except a few spirited ones that suddenly break into a trot, eliciting happy shrieks from those on their backs. The mist has descended and it is freezing cold at the lake, though most tourists, busy bargaining over yak rides and photo-ops seem to hardly feel it. 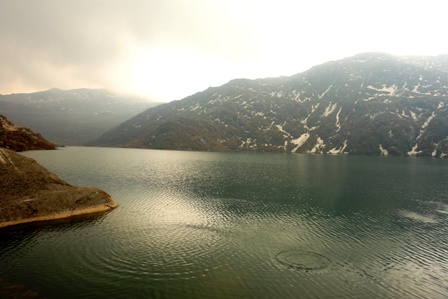 Also known as the wishing lake and is a place of worship for both Hindus and Buddhists. Unlike the other Sikkim lakes, there are no tourist traps around here; no yak rides, no wheedling vendors, no trinket shops. A walk along a peaceful shaded path leads you to the lake. A small temple and then a stone path, with prayer wheels on either side. We take off our shoes at the entrance and walk to the lake. Several people are offering prayers at the lake, a priest holds flowers in his hands and is instructing a woman on the ritual she is performing. It is a clouded day and the sky is a white blanket, the lake a lifeless green with colorful reflections of prayer flags all along the sides of the lake. 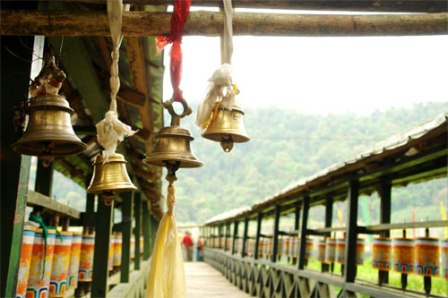 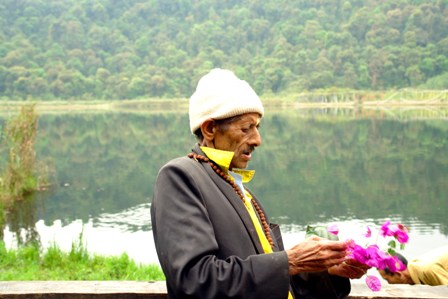 And the biggest and most beautiful of them all, this lake is at a breath-taking (literally!) altitude of over 17000 feet. Named after Guru Padmasambhava, also known as Guru Dongmar, this is the most sacred of all the lakes in Sikkim. The approach is through non-existent roads through terrain that feels partly desert and partly lunar, along the Khangchengyao range, snow-capped mountains that feel within touching range. And at the end of the arduous drive, a bright blue patch, prayer flags adding color to the borders.

Photoessay: the Big 5 and more from Kenya

9 thoughts on “Lakes of Sikkim”