The simit vendor shakes his fist at me. He is tired of tourists taking photographs of him and his pretty sesame-flecked looped bread without buying anything. On the other side, my friend is trying hard to not shake her fists at me; instead she points to her watch impatiently. We barely have time to grab cups of coffee before we board the ferry. We are there for the ‘scenic Bosphorus tour’ as recommended by a local friend. Istanbul wakes up early, even for a chilly autumn morning. The chestnut vendors have all already set up shop as the cab drops us at the entrance of Besiktas Quay down the road from our hotel. The first fifteen minutes of the cruise are the most exciting for most of us on the boat as we cruise past the extremely picturesque Ortakoy mosque and under the older Bosphorus bridge. We have spent all of Saturday walking along the crowded stretch of Sultanahmet and so floating lazily on the Bosphorus is the perfect thing to do on Sunday morning. And so we float, past obscure fishing villages, wooden houses painted in bright colors, sea gulls out for a morning dive, tiny river-side restaurants, an odd castle or two. Soon after we cross the Ortakoy mosque, on the Asian side along Bebek are the picturesque 19th century wooden villas (called yalis). I remember my friend talking about the exorbitant rates of real estate along this stretch and I can immediately understand why this part of the city is such a desirable place to live in. Imagine sea gulls as breakfast companions and the horn of tugboats in place of blaring cars and buses; you would want one too. 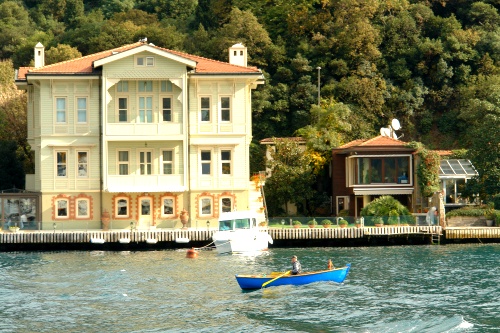 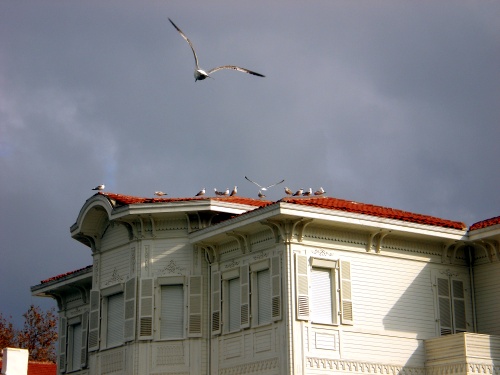 It is of this experience that Orhan Pamuk has written, “To travel along the Bosphorus — be it in a ferry, a motor launch or a rowing boat — is to see the city house by house, neighborhood by neighborhood, and also from afar, as a silhouette, an ever-mutating mirage”. The Bosphorus is a strait between the Black Sea and the Marmera and runs through the heart of the city, dividing it into two – Rumelia and Anatolia. For a moment out there, you are straddling two continents. The Bosphorus is everywhere in Istanbul; in many ways it defines the dualism of this city: European and Asian, traditional and modern.

The cruise goes all the way to Anadolu Kavagi, a fishing village close to the Black Sea, but our recommended itinerary is getting off at an earlier stop and taking a cab back to Ortakoy. And so we duly get off at Sariyer and take a taxi and a journey along the Bosphorus that goes on for the better part of an hour. As we step out of the Sariyer quay, it is tempting to settle down at one of the river-side cafes with views of the fishing boats and ferries and sea gulls, with a cup of coffee. But Ortakoy has been advised and so ho! to Ortakoy. In the cab, we pass fishermen all along the way (arguing about whose fish was bigger, I guess), friends reading newspapers, even playing cards early in the morning. And then the old Turks, dressed in Western suits, complete with mufflers and felt hats, playing a version of Scrabble that I am tempted to watch and learn. Sipping what I imagine (since I love it so much and think it the perfect drink for a cold Sunday morning) is apple tea, from traditional tulip glasses. At Ortakoy, none of the squalor or desperation Pamuk describes as part of the character of Istanbul is visible; once the “middle village” Ortakoy under the older Bosphorus bridge today is a suburb that sings with the life and hope that this wonderful river can offer. Young couples, the women dressed in smart Western clothes are holding hands and eating ice-cream, children are playing noisily in the tiny park, and vendors are selling jacket potatoes (kumpir) and sinful waffles with delicious toppings. We debate briefly between the inviting cafés along the water and the equally inviting food from the street vendors. And finally conditioning kicks in; having grown up in India, I believe firmly that street food is always bound to taste better. And so it does. Down the road, the Sunday flea market is just beginning to pick up steam. Locals and tourists stop there for the pleasure of bargaining over silver jewellery, sweaters and scarves, beads and semi-precious stones, and antiques looking suspiciously new and shiny. I buy some fridge magnets in ceramic with the whirling dervish motif (extremely popular in Turkey) as souvenirs and refuse to get tempted into considering some of the more attractive antiques.

And at the entry to the market is the Büyük Mecidiye Camii (Grand Imperial Mosque of Sultan Abdülmecid), known simply as the Ortakoy mosque. Built in the mid 19th century, it is a baby by Turkish mosque standards. We are feeling mosqued-out, having spent the better part of the earlier day at the exquisite Blue Mosque (built in the early 17th century) and the imposing Hagia Sophia (or Aya Sofya, originally built as a church in the 4th century), and give it a miss. Me, I am just happy sipping on that hot chocolate, listening to the music from the cafés and watching the boats on the Bosphorus.

The cruise starts from Eminonu and is a six hour round trip, though you can get on and get off anywhere in the middle. You have the option of going all the way to the last stop on the boat at Anadolu Kavagi on the Asian side, a tiny fishing village thrust into the limelight thanks to the ferry. It is a pretty village and the boat stops for two hours there, time enough to catch a fresh fish lunch and ice-cream. If you have the energy after that, you can also make that short trek up the hill for wonderful views across the Bosphorus from the 14th century Genoese Castle. By the time you cross Sariyer and get to Anadolu, the Black Sea becomes visible, and the Bosphorus is no longer the placid mid-city river it was all along.

Information on the cruise can be found on this website (http://www.ido.com.tr/en/) and tickets can be bought just before the cruise. Fly Turkish Airlines direct to Istanbul from Mumbai and Delhi or Emirates via Dubai. A Turkish tourist visa can be bought from the Embassy at New Delhi. Turkey is all ready to play European Culture Capital in 2010 and a morning at Ortakoy, or any of the smaller villages along the cruise route is enough to give you a glimpse of both cultures, European and Asian.

***
This piece was published in HT Cafe on Saturday, June 20, as The River Between

8 thoughts on “One river, two continents”