Published in Mint Lounge as Going round in circles… She could throw a whirling dervish out of whirl. I cannot get this line out of my head and to my complete dismay, I find myself mentally humming the rest of the song as I watch the four Mevlevi spin in front of me. I mean, here I am at a performance I have been dreaming of, ever since I planned the Turkey trip and I am thinking about Maria and her whirling and whistling abilities? 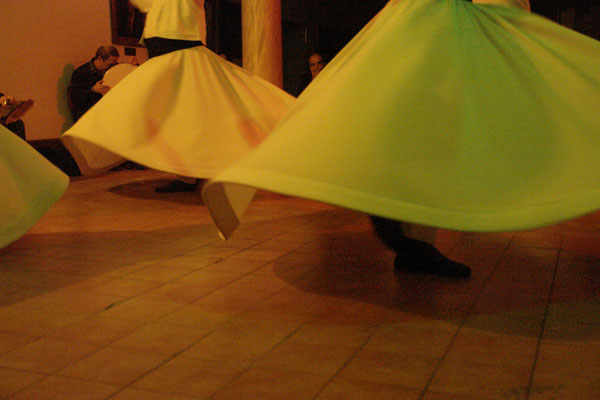 A secret turning in us,
Makes the universe turn.
Head unaware of feet,
And feet, head.
Neither cares.
They keep turning.

This describes the dancers perfectly, as they whirl and whirl and whirl, white skirts billowing gently, feet never once faltering, attention never once diverted, even by the sudden and harsh light of a forbidden flash camera. Just to put things in context, I read somewhere that initial training for a Sema performer includes standing on a wooden plank one square meter large, with a nail in the middle and learning to turn his foot so that the nail is between his big toe and second toe. Those taking part in this ceremony are traditionally called ‘Mevlevi’ – followers of Mevlana (meaning ‘our guide’) Jelaluddin Rumi.

The entire ritual is based on symbolism, the dancer departing from his ego and turning towards truth and spiritual perfection. The English speaking guide explains the significance of each element of the performance but his voice fades away from my consciousness as the musicians begin playing in the background. The initial segment is a eulogy to the Prophet Mohammed and the sound of the flute (known as the ney, thought to breathe life into all creatures) is especially mesmeric.

After a few minutes, the four dancers enter the room dressed in the traditional long, black coats and the tall conical fez on their heads and greet each other formally three times. As they begin moving, the first step is to remove their cloaks, symbolizing the shedding of the ego, or falsehood. The dancer’s arms are open, the right hand directed to the skies, seeking god’s benefaction and the left hand facing the ground, passing this blessing on to all things around him. The whirling of the dervishes is supposed to replicate the movement of planets revolving around the sun (in this case, God), each rotating on his own axis, while slowly circling around the room. The whirling is anti-clockwise, the minds of the spinning men on meditation mode; Let yourself be silently drawn, by the stronger pull of what you really love (Rumi). A local friend later says dismissively, “If it was the genuine religious thing, you would not have been allowed there”. Ah, well, the real McCoy or not, I am captivated by it all – the solemn ritual, the haunting music and hymns, the serene expression on their faces. In the 1920s, Kemal Ataturk, the revolutionary Turkish leader in his zeal to modernize Turkey and make it more European, banned the Mevlevi sect as being backward, traditional and just too ‘Islamic’ (the list of things banned by Ataturk is long and includes the traditional fez and the native Turkish script). Later in the 1950s, the government legalized the Mevlevi order as a cultural (non-political) organization and allowed the whirling dervishes to perform annually in Konya on December 17, the anniversary of Rumi’s death (celebrated as his union with his beloved god).

Today the whirling dervish is one of the most visible and popular icons within Turkey, found everywhere from fridge magnets to tea coasters and ceramic bowls. While weekend performances are popular within Istanbul, the annual ceremony at Konya is on another scale altogether and attracts thousands of Sufi followers from across the world. The lodge where Rumi lived is now a museum and the entire town is a silent and enduring homage to the philosopher-poet.

And Maria, Mother Superior, don’t take this personally, but you just cannot throw a whirling dervish out of whirl.

In Istanbul, Sema performances (the more authentic ones – avoid the ones in restaurants) take place regularly at the Galata Mevlevihanesi, the hall for the Mevlevi at the Southern end of Istiklal Caddesi in the throbbing Beyoglu shopping district. You can also catch performances at the atmospheric Sirkeci station, the old railway station where the Orient Express used to end its long run from Paris. I booked my performance at the Cemberlitas Press Museum in advance on email (galatamevlevi@gmail.com) through this website (http://www.rumimevlevi.com/en/index.php)

The Whirling Dervish Festival at Konya is held between the 10th and 17th December each year. Konya is connected with Istanbul by bus (roughly 10 hours), train and flight (Turkish Airlines has daily flights) though during the festival period, it is advisable to book travel and stay well in advance.

13 thoughts on “Outwhirling the dervish”