“In my next birth, I want to be born in India,” I overhear Maheswari say in Tamil to her friend who is working silently, head bent over the tea bush, hands rapidly transferring the leaves to the basket slung over her back. While she ignores Maheswari, the other women giggle and whisper among themselves. Now I am curious; what does Maheswari think about India? And what kind of promises does the country hold for her? So I ask her. “So I do not have to work here in this tea garden all my life, so I can come as a tourist and take photos like you are doing now”, she says. The tea industry in Sri Lanka provides employment to over a million people (in a country of 20 million people), I remember reading. Maheswari is one of them. 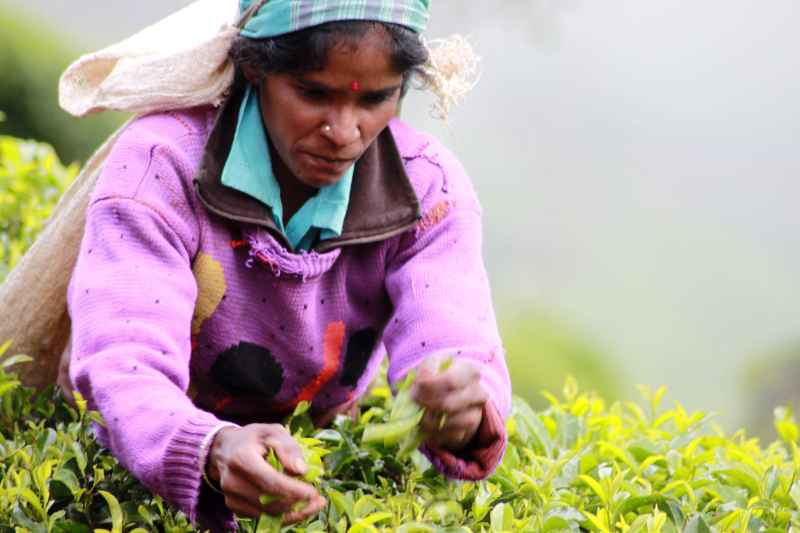 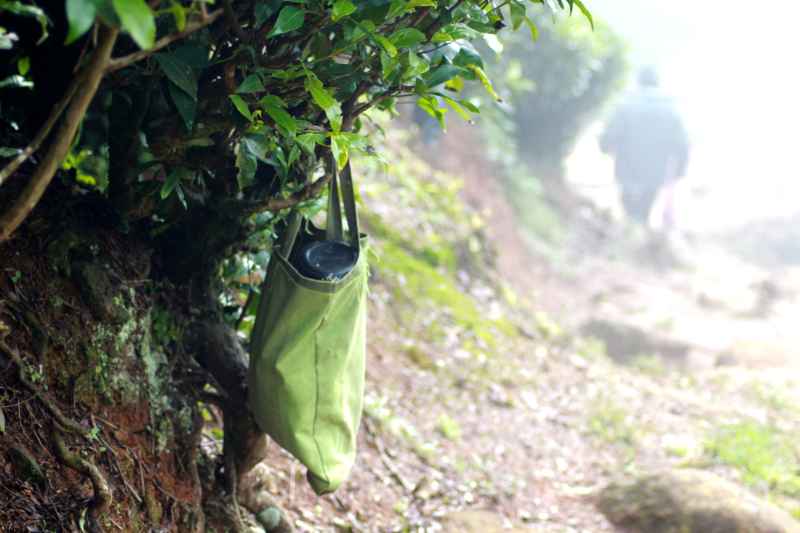 Maheswari has been seeing a lot of visitors from India in the last few months, since peace was officially declared in the tiny island. And though not all of them speak Tamil or stop to chat with her, she thinks they are friendly people. Anyway, visitors from India are not new to Sri Lanka; several centuries ago, the Cholas arrived as conquerors and ruled for over 75 years. And much earlier, in the 2nd century B.C., Emperor Ashoka sent his son Mahindra and daughter Sanghamitra to Sri Lanka to spread the tenets of Buddhism. And more recently, South Indians – like the forefathers of Maheswari and her co-workers – have moved to Sri Lanka to work in the tea plantations of Nuwara Eliya and its neighbourhood.

Tea was brought into the country originally from China and later Assam in the mid-19th century and today Sri Lanka is the second largest exporter of tea in the world. It was in 1867 that James Taylor, a Scottish planter first started the commercial cultivation of tea in Sri Lanka and till as recently as the 1970s, most of the tea plantations were owned and managed by the British. Nuwara Eliya, at close to 7000 feet, is where the British headed in summer to escape the heat of the plains.

And once up there, they set about converting the quaint Sri Lankan town into a piece of their own homeland. In the town and in the estates along the way, I spot names like Labookellie, Norwood and Court Lodge and I know immediately why tourist brochures now proudly refer to Nuwara Eliya as ‘Little Britain’.

We are staying at the Tea Factory Hotel, an erstwhile tea factory set on top of a hill, in the middle of plantations. This factory once served the Hethersett plantation, named after the initial owner Mr. Flowerdew’s home town back in the Blighty. Inside the hotel, the original pieces of machinery from the tea processing days have been kept intact and there are signboards to remind us of the history of each spot inside the hotel premises. The hotel’s bar, for instance, was once the tea packing room, while the room we are staying in was the withering loft (so says the notice on the wall). I fall asleep that night imagining that the faint fragrance of tea still lingers in the air in the rooms that were once filled with the aroma of original Ceylon tea being processed. 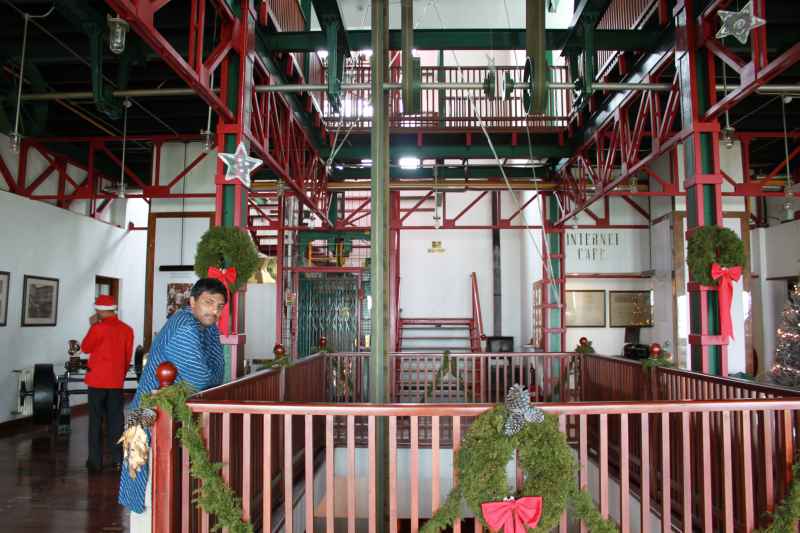 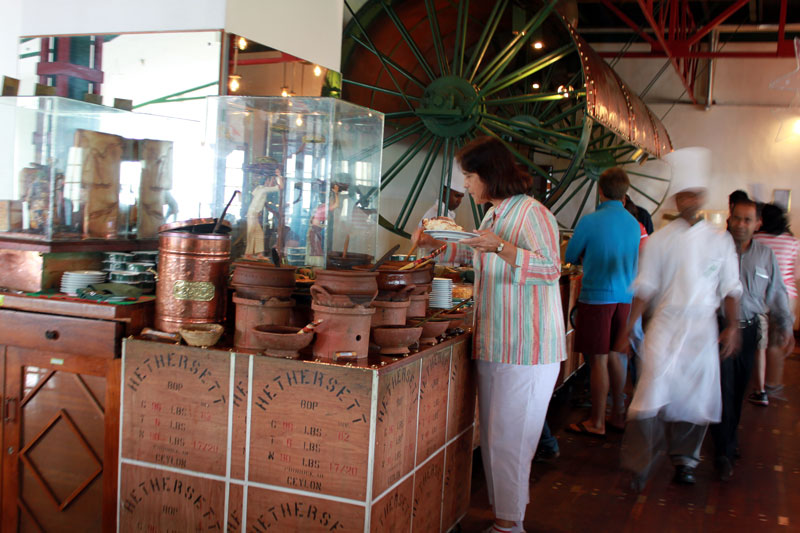 Locals call the plantation Poopanie Estate, a literal translation of Flowerdew. ‘Poopanie’ is also perhaps a picturesque reference to the thick grey mist that covers the hills around the hotel at all times of the day. The next morning I wake up to see blanket upon thick blanket of white cloud outside my window. Our plan is to head out to nearby Ella, certified by Lonely Planet as one of the prettiest spots in all of Sri Lanka, but the idea of driving on the steep narrow mountain roads in such poor visibility is not a welcome one. 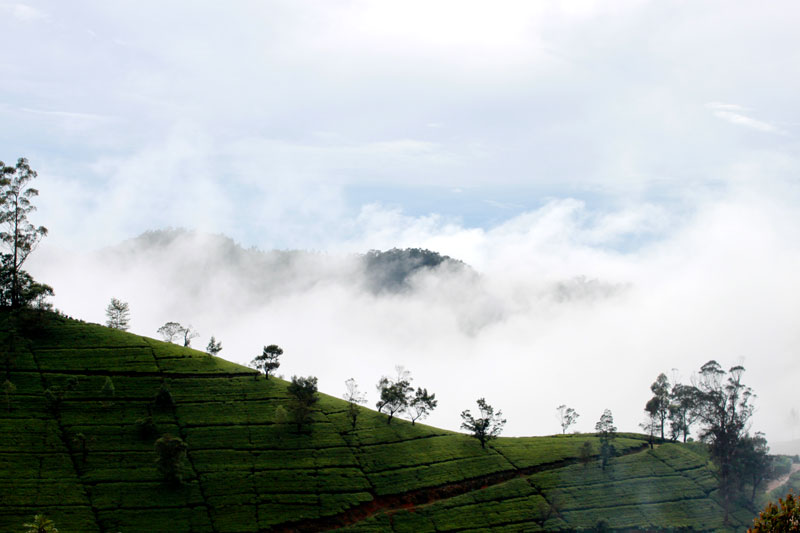 So we wait for the sun to finally emerge from behind the clouds and then set off towards Hagkala Gardens, just outside town. It is then that I hear the first mention of the Ramayana in many days in Sri Lanka. Hagkala is believed to have been the pleasure garden of the Lankan king Ravana and the place where he held Sita captive for many days. My guidebook says that the people of Sri Lanka believe that Ravana had his capital (summer capital perhaps, just like the British?) in Nuwara Eliya.

My guide grunts in a non-committal manner when I ask him about it; “many stories”, he waves the questions away. However, he stops the car at the small, garishly painted Seetha kovil (Sita’s temple) just before the garden and orders us in. Inside, I see people peering at the rocks near the water, looking for the footprints of Hanuman who (it is believed) visited this place in his search for Sita.

Back at the hotel, I am reading the list of ‘things to do’ that the management has thoughtfully provided for those guests who seek activity rather than relaxation even in such a place. And one of the attractions on offer at the Tea Factory Hotel is the opportunity to pluck and process your own cup of tea. That however sounds too much like work and I am content to just walk in the middle of the manicured tea in the estate, trying to work off the heavy breakfast. A gang of local kids have congregated at one spot, evidence of their abandoned game (a rubber tyre, a long stick – playthings of children anywhere) on the ground and are grinning broadly. It turns out that a European couple has taken up the hotel’s offer and are at work in the plantation.

So husband and I stop to watch them, plucking one tentative leaf at a time, guided by a woman worker who clearly cannot wait for them to finish so she can get on with her job for the day. The man has a bright lungi under his T-shirt that he keeps tripping over as he walks on the narrow mud path but his partner seems perfectly comfortable in the deep green sari that sets off her pale skin to advantage.

The route back to Colombo the next day is scenic, with tiny waterfalls all along the way. We stop for rest at the St.Clair’s Tea Centre, named for the waterfall across the hill. Sipping on fresh Orange Pekoe, I remember the story of the discovery of tea. The Chinese Emperor Shen-Nung (the story goes) in 2737 B.C. was heating water when a few leaves from a wild tea bush accidentally fell into the water. He liked the taste and flavour imparted by the leaves and declared that the liquid gave one “vigour of body, contentment of mind, and determination of purpose.” 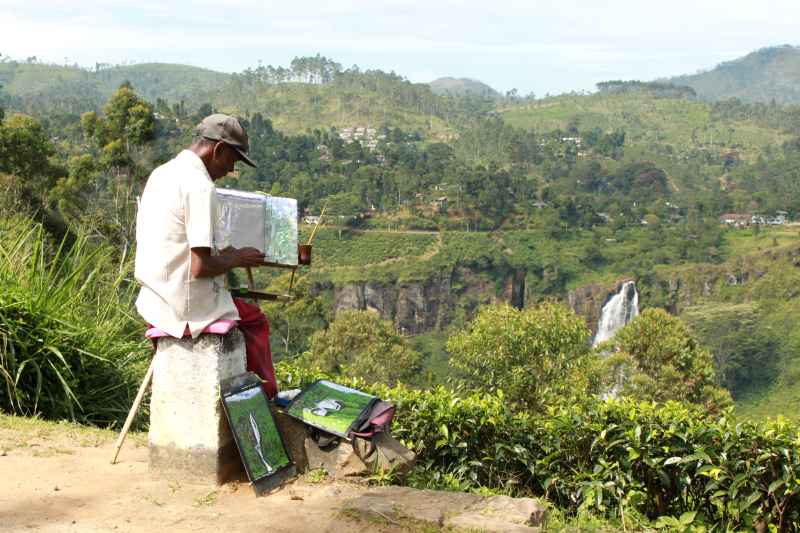 The discovery of tea was an act of serendipity (meaning discovery by accident). And that makes me think that there is something right about the way tea is strongly associated with Sri Lanka. After all, it is the country’s original name – Serendip (or Serendib) – that gives us the word serendipity.

***
Nuwara Eliya was my favourite spot in Sri Lanka – after a couple of dull days of heavy rains, Nuwara Eliya was bright and sunny and cheered us up no end. And the Tea Factory hotel is truly a special place to stay in – this piece was published in the February issue of FlyLite, the inflight magazine of Jet Lite.

9 thoughts on “Calm in a teacup”