The Ramzan holiday was a long weekend in Malaysia and a friend from Jakarta had also come down to Kuala Lumpur. And so, bright and early on Friday morning, the four of us set off for Taman Negara.

Not so bright really, since the morning dawned rainy and gray, prompting this status message from me on facebook – ‘I know it is called rainforest but does it have to rain the morning I am headed there?’. Luckily the rain let up by the time we headed out of Kuala Lumpur and the weather felt just right for a long drive – sunny and cool, with misty clouds swirling over Genting Highlands in the distance.

Now Taman Negara was entirely my decision – each time I saw an ad for Malaysia Tourism, it was the canopy walkway over the forest that caught my attention – imagine, a walk on a rickety bridge over tall trees! I had no idea where this canopy was exactly in Malaysia – I found out when I was researching travel options just before I headed to that country. I also found out that Taman Negara is one of the world’s oldest rainforest – 130 million years old. And so my insistence on heading to Taman Negara – my local friends (who were driving and guiding us) were hoping for a shorter and easier trip to Malacca but I would have none of it.

A bit about the name – Taman Negara literally translates as ‘National Park’ – so much for creative names – a forest as ancient and venerable as this surely deserves something spicier? But then, it was called King George V National Park before the Malay government changed its name after independence in 1957. And anyway, who am I to crib? In India, we would have renamed it the Rajiv / Indira / Rahul Gandhi National Park – in comparison, Taman Negara surely sounds zingier.

The road to Taman Negara was beautiful – two hours on the broad divided highway, followed by two hours on narrow village roads.

Cows clearly had priority here, judging by the signboards all over – in any case, the roads were mostly empty (it was Ramzan day); no cars, no cows. And on these long, winding country roads, I did one of the craziest and funnest things ever. 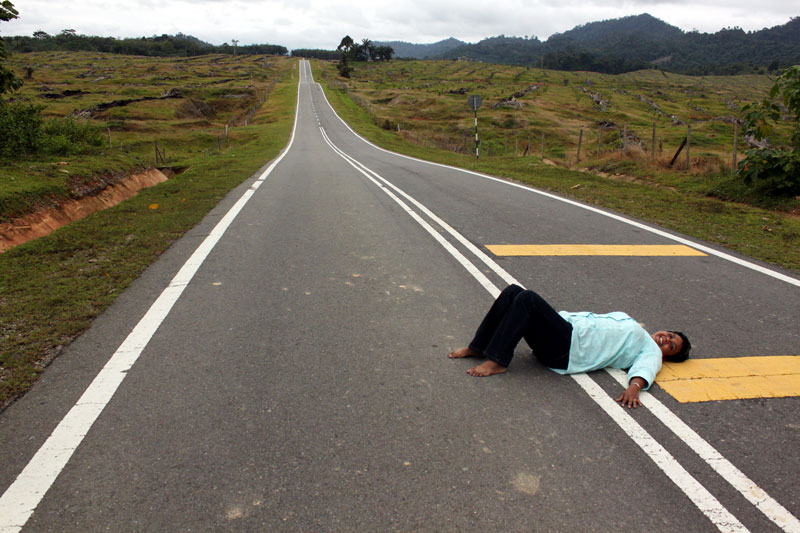 The next morning, we walked to the jetty at Kuala Tahan and crossed the muddy Sungai Tahan in a minute on a longtail boat. We were immediately inside the National Park area, where we bought our tickets and headed towards the canopy walkway. It was a hot day; during parts of the walk, the sky was hardly visible thanks to the cover provided by the tall, wide trees but the humidity levels were enough to leave us all puddles of sweat by the first twenty minutes. The few hundred meters have wooden steps – heh, what kind of jungle walk is this? And then the fun starts! 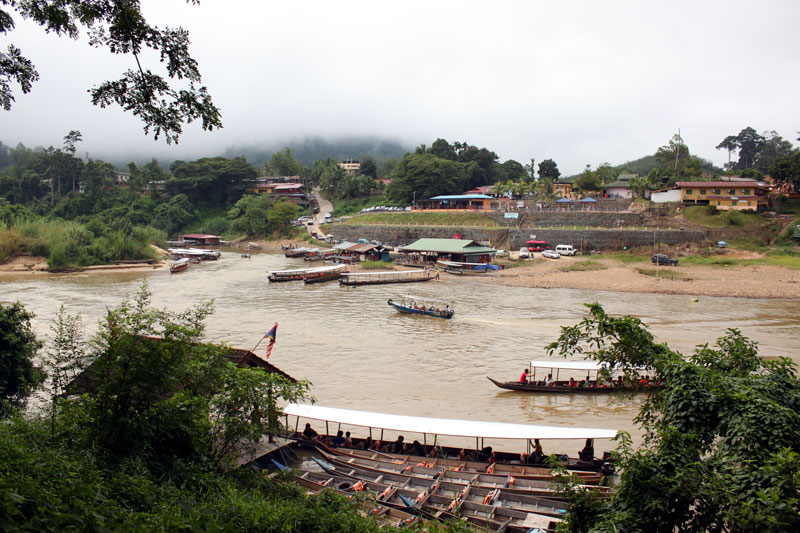 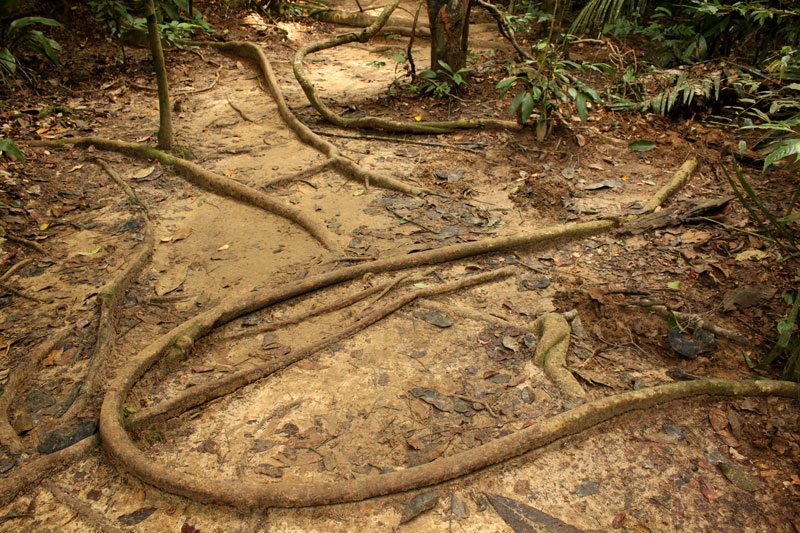 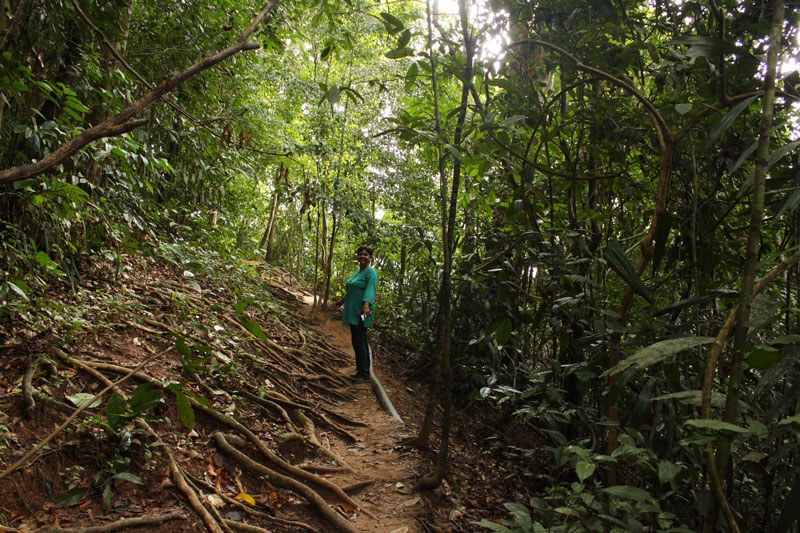 It is about 2 kilometers to the canopy, not a tough walk, even for soft city types like me. If you walk without stopping (and that would have been a good idea, as we found out later – even if it sounds pointless now), it should not take more than 45 minutes. We took close to two hours! It was just the heat (it is as good an excuse as any!) combined with a path full of booby traps (read: winding tree roots) for people like me to trip and fall on (which I did, bruising my knees a pretty purple). And the fact that we had to stop every 3 minutes for a photograph – the trees, the ominous-looking tree roots, us under the trees in various combinations, mushrooms of all shapes and colours (my hands were so shaky from the heat and tiredness that I barely managed any good shots of these), ditto for leaves and flowers.

Bad idea. The canopy walkway is open from 9.30 a.m. – we reached by 11.30 a.m. – to find half of Malaysia, and a significant proportion of other nations (damn these tourists!) already waiting in line, patiently wilting under the midday heat, especially after the last 200 meters of climb up those wooden steps (I know it doesn’t sound like much – wait till you try it). Long holiday weekend, people.

And so we registered our names and waited. And waited. And waited. For two hours (only a limited number of people are allowed up at a time for safety reasons). Too tired to even talk among ourselves for the first thirty minutes. So we sat in quiet desperation, watching the large tour groups talk in rapid-fire Japanese (signs of a reviving economy?) and munch on snacks and cold drinks incessantly. My sympathies were with the other snackless souls like us, all trying to make themselves as comfortable as they could, looking up longingly at the walkway.

Finally, we heard our names being called and we made our way up to the canopy and started walking along the wobbly bridge. It was initially scary, and all our energies were focused on just holding on to the sides. By the time we reached the first bridge point, we were used to it and comfortable enough to take photographs; look ma, no hands! The canopy meanders close to a 100 feet above the ground, over the forest, through the middle of tall trees – I looked up to see them stretch on a hundred feet higher! The sounds of the jungle were all around us; birds chirping, leaves rustling, crickets and insects humming, even the flow of the river at a distance… 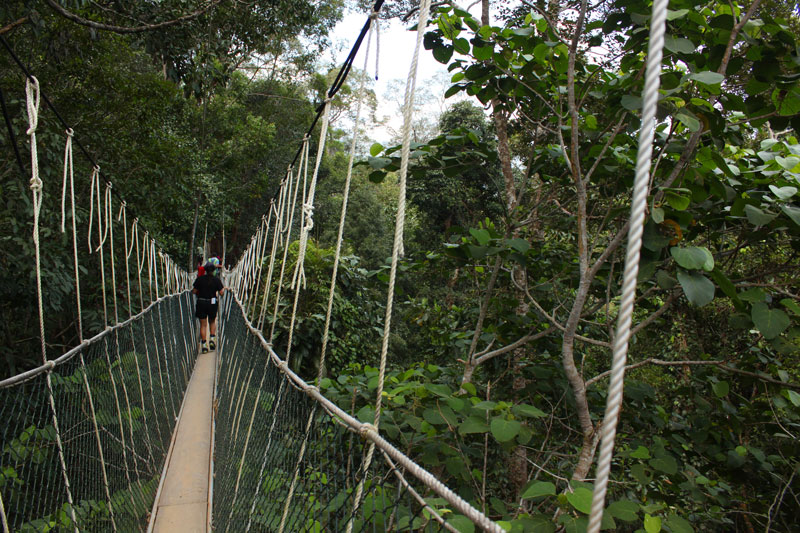 A word about the canopy itself. It is a narrow walkway, stretching for over 400 meters on top of the trees. Only 280 meters of the walk was open to public that day due to some repair-work on the remaining path. We had walked for two kilometers and waited for two hours on a hot day to walk a 280 meters above the trees? Well, all I can say is, it was totally worth it.

***
(More on Taman Negara, including travel and stay information coming up soon – watch this space!)

His and Hers: Biscuits for both

Non-sightings at the night safari

The mask maker of Malaysia

4 thoughts on “A walk above the woods”