That is what I had called my piece on the falafel. I wrote a gushing tribute to it recently – a slightly different version of this piece was finally published.

“Yeh kya pakode hain?” my fellow journalist crinkled her nose at lunch at Falafel House in Istanbul. And I swear she looked around for tomato sauce to go with the falafels. But then, she thought hummus tasteless and the glorious Hagia Sophia boring, so I am not saying anything more. 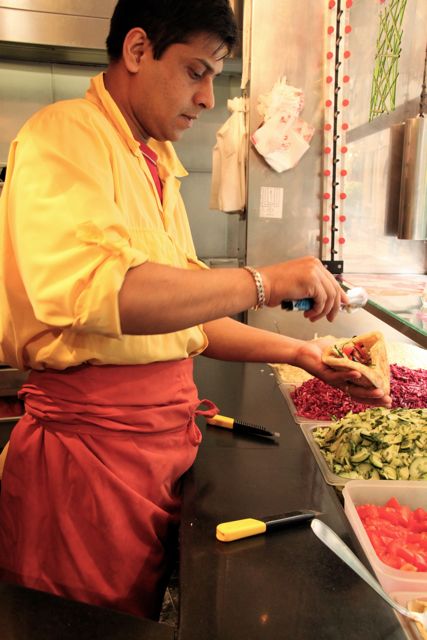 “Fine, go taste it for yourself” he said, giving me a raised-eyebrow look that added, “your fate.” This is shop 1, the L’As Du Fafafel, acknowledged generally by food bloggers as the best falafel joint in Paris. But I am all for the underdog. So I head to Mi-Va-Mi just across the road. I have no idea what it means but really, that lilting rhythmic sound of the name – who can resist it?

It would have been very easy to miss these stalls had I not gone looking for them. Tucked away in a narrow lane (Rue des Rosiers) in the hip Marais area in Paris, these two tiny outlets compete for business every single day. “Hmm mmm, the best in the world,” Mi-Va-Mi’s grinning chef tells me as he leads me by the hand inside his shop. Lunch time is far away and the crowds have not started pouring in, so waiters from both are standing out on the street, entertaining themselves by calling out to passers-by and trading insults. 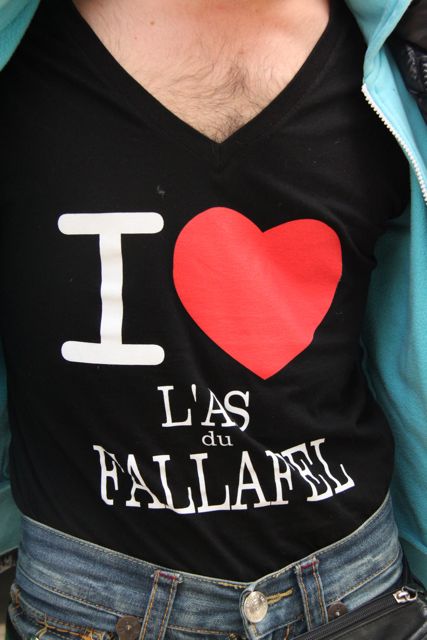 So husband and I stuff our faces (literally, if you have seen the size that a fully loaded falafel sandwich can assume) at Mi-Va-Mi and then head to L’As to try theirs. My verdict? The underdog deserves better press – falafel at Mi-Va-Mi had just that extra tanginess that makes all the difference – and loads of grilled eggplant which appealed to the baingan-loving Telugu man that my husband is (really, what is it about baingan that can evoke such delight?) However, in terms of the vibe, it is L’As all the way. I was floored even before we placed our order, when the waiter who had serenaded us earlier unbuttoned his shirt to reveal his black T-shirt which read ‘I (red heart) L’as du Falafel’. 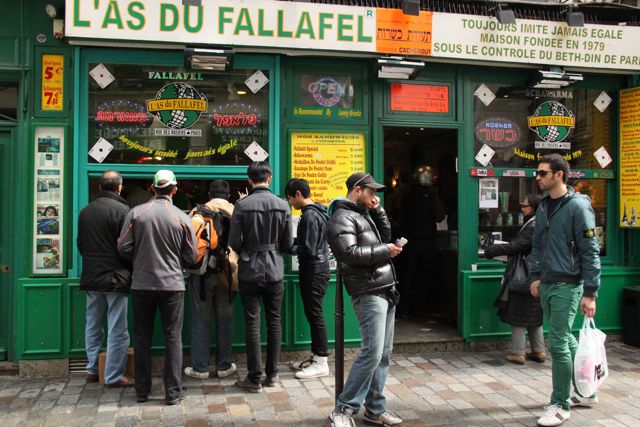 Both places have seating inside but the right thing to do – take it away, walk to a shaded open space and dig into it (ignoring the looks from people around you as they watch you lick that tahini from your chin). Then walk to the nearest bakery for dessert – or if you are in Paris, to the Berthillon ice-cream parlour on I’le Saint-Louis which sells, you guessed it, the best ice-cream in the world. Trust the Parisians to believe they have the best of everything. But in the case of the falafels, and only in that case, I agree with them. 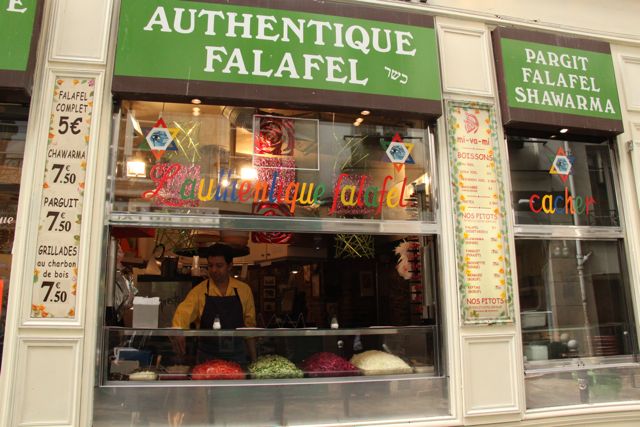 I can understand why the falafel should appeal to my Indian sensibilities – it came cheap (6 euros), saved my starving vegetarian self and was sold by incredibly friendly people (walk around Paris for three days braving the surly waiters and you’ll know). In fact, it has so much going for it that it should appeal to any Indian. It does not pinch your pocket (even as you furiously make that rupee-euro conversion in your head), it has sinful fried stuff, it can be made spicy and it is best enjoyed messy. And any self-respecting mangophile will attest, messy is directly proportional to tasty. Spicy? Well, the word falafel is supposed to have come from the Arabic ‘filfil’ or even further back to the Sanskrit ‘pippali’, meaning pepper – so just go full tilt on the dressing.

But what is it about it that makes even die-hard carnivores nod in approval? There are serious arguments among Parisian bloggers who otherwise write in smooth, snooty tones about the wonders of their city – they wax eloquent when it comes to the falafel. Words like flawless, crunchy, velvety, creamy, crisp, juicy – and surprise, surprise, that word the world uses so rarely – amazing! flow without restraint. And it is not just Paris. Which is the most-loved street food all the way across in the USA? Not the hot dog. It is the unassuming falafel (it won both the people’s choice and judges’ choice awards at the Vendy’s last year, the ultimate award for street food).

Yeah, so, falafel. The word traditionally refers to the crisp fried but soft inside chickpea fritters (please, anything but pakoda) but now also means the pita bread sandwich in which it is served most often. And that sandwich is an art of work in itself – the falafel balls, creamy hummus, salted fresh and grilled veggies, tahini, mint sauce… all stuffed into a pita pocket that oozes rapturous goodness with every bite.

If you don’t want the mess (really? why?), you can get these separately too on a plate – all the ingredients with pita bread on the side. But anyone who has eaten panipuri served at your table on plates with a tiny cup of pani by the side will know what an unsatisfying experience that can be.

The falafel is believed to have originated in Egypt – where they make the fritter with fava beans – and rapidly made its way along the Middle East. At some point, Israel appropriated it as their national dish. And Palestine protested. And the rest, as they say, is history. No, not really but there is a sustained food fight going on the region (mostly on the internet) over falafel.

In India, the best ones are available at the Falafel Veg Hummus House in Mumbai (various locations), Ta’am Falafel Restaurant in Bangalore (Koramangala) and Alaturka Doner Kebab and Falafel in Delhi (Select City Walk mall).