I’ve been wanting to write this for so long now. The Masterchef Australia judges were in town a few weeks ago and I got invited for a lunch with them at Caperberry. The restaurant, of course, had pulled out all stops for the two of them and served a most excellent lunch. (All photos on cameraphone and sadly blurred).

At the end of it all, I shamelessly asked for a photo with the two of them and put it up on facebook, to the envy of many many many. People I hadn’t heard from in years called to ask where I had met them and could I get an autograph for their children? I had no idea Masterchef Australia was so popular in India. Apparently, neither did George and Gary. At an event in Mumbai, they found that over a thousand people had turned up just to see them – not meet, say hullo types – just see them.

Gary and George?: Very warm and friendly, in a way that perhaps only Aussies can be. One reason their show is so popular is that they are not harshly critical of the contestants. Not like the bile spewed by other “reality shows” – this should be a lesson that good stuff also gets good TRP; TV need not be controversial and loud. They loved talking about contestants from previous seasons and how they mentored some of them. And the two of them were as friendly with the kids who trooped in for autographs (the moms wanted their own pics with G and G more than the kids did!) as they are on the show. 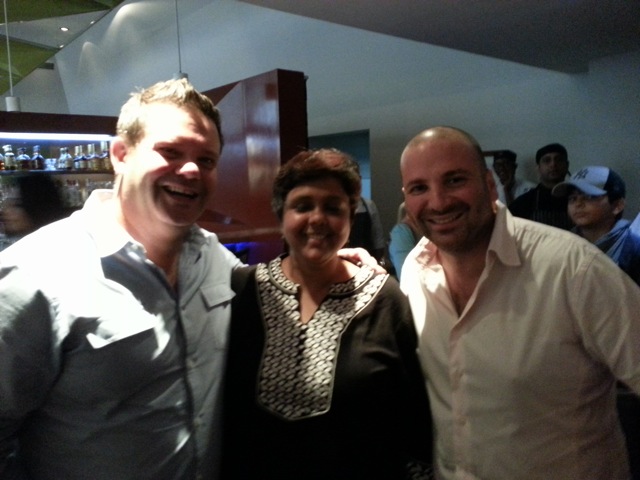 The conversation?: Everything, from a couple of journalists conducting impromptu interviews even as we all ate and chatted about other things. The show, their best experiences, their take on Indian food – what they liked and didn’t like so much, shopping for jewellery, the story of Gary’s engagement ring (from long long ago). Then the food they had tasted in Delhi and Mumbai, including chaat and dosa. The realization that Indian food is more than a red spicy curry. Advice on good South Indian food and where to taste the best in Bangalore. I ran into Gary at the ITC Dakshin the next day – he had taken our advice and trooped there for his Sunday lunch – and loved it all. And oh, they also mentioned the lack of good Indian restaurants in Australia (here’s the cue for all of you who have dreamed of opening a restaurant).

The food? The chef Abhijit Saha had designed a lovely multicourse meal – a separate menu for vegetarians – each of them light and with subtle flavours (I brought one of the menu cards home with me). The dessert was a choice between Jalebi, which Gary had declared he loved and a New Age Tiramisu (though I didn’t choose to see how new age a classic as Tiramisu could get). My favourite was the Mango & Basil Popsicle in the middle of the meal – what a playful, quirky thing to serve at a formal lunch! 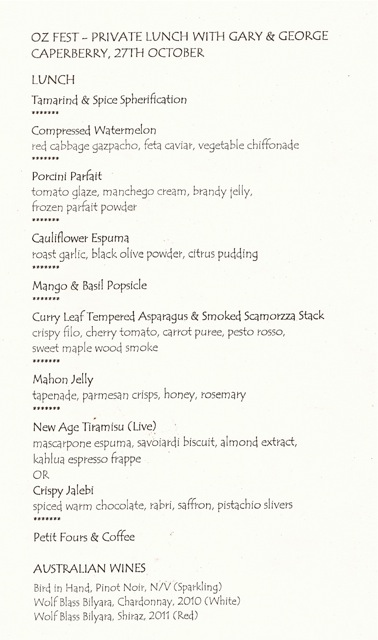 In all, a superb meal and a fantastic experience. 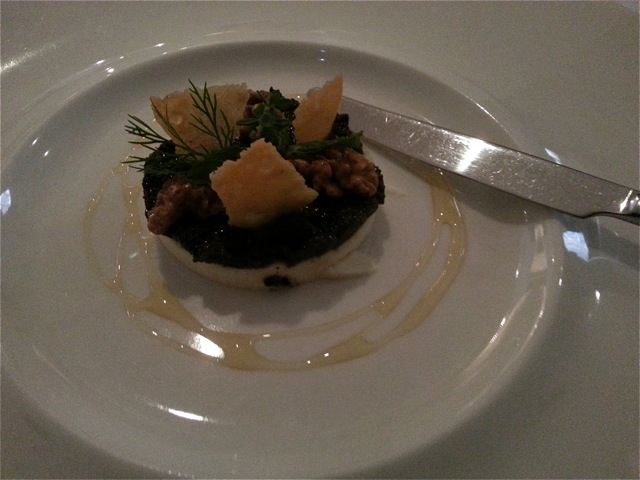 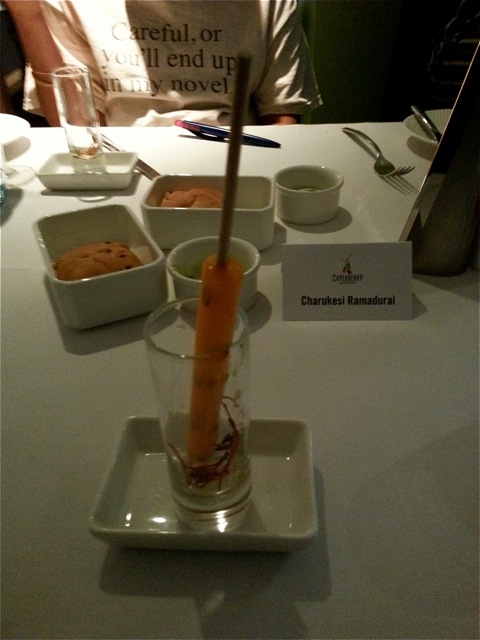 4 thoughts on “When George and Gary came a-calling”