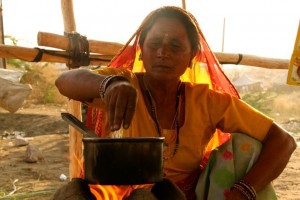 It’s early evening, still a couple of hours to go before the sun sets. In a roadside stall, a blackened pan sits on a single stove, a brown sludgy mixture of milk, tea, and sugar brewing in it since morning. And in front of the stall, a dozen men of all ages exchanging the day’s news and gossip, the steam rising out from the tall glasses of chai in their hands. It’s a scene from any place, any time in India.

India has been a tea drinking nation for centuries, with a strong cultural connection to the beverage. Apart from the public social bonding ritual, tea is what is offered to guests at home, even strangers. The shifty peon at a government office will ask you not for a bribe directly but something for his chai-paani (literally, tea and water). In a lot of advertising in India, a cup of tea denotes the housewife’s “me time,” that time of the day when she finishes her domestic chores and puts up her feet for a few moments of quiet.

And why not? In India, tea is the cheapest drink after water and affordable to everyone. It can be had “spiced” (the way Indians like their food and drink) with a range of condiments – ginger, cardamom, pepper – and consumed as masala chai. A 2008 study on beverage consumption patterns in India (by ORG) shows that 83 per cent of all households consume tea.

But is that set to change? Starbucks, that enormous coffee conglomerate, has opened its first shop in India, in Mumbai. The brand, with outlets all over the world, had been eyeing the Indian market for years, finally joining hands with Tata Global Beverages earlier this year. It promises to use only locally sourced and ground espresso, and the company believes India has huge potential since coffee consumption at present is low; 100 gms per person per year as compared to 4.5 kg per person in the USA. Although Starbucks does sell a homegrown version of Indian tea called the Chai Latte, the focus is bound to be on the coffee business. The company also has plans to open more stores in Mumbai this year and New Delhi next year. 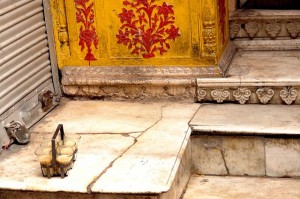 And just earlier this year, another storm has broken out inside the proverbial tea cup, with an announcement by the Planning Commission that tea was to be declared India’s national drink by April of next year. This is to mark the 212th birth anniversary of India’s first tea planter from the North Eastern state of Assam, Maniram Dewan, who also played an active role in the 1857 revolt against the British.

When this was announced by the Deputy Chairman Mr. Montek Singh Ahluwalia, protests erupted everywhere, with different communities clamouring for the spotlight on their own drink. Milk!, said the co-operatives like AMUL from Gujarat in Western India, while Punjab up North voted for lassi (thick buttermilk, either salted or sweetened). In all this, the irony of the situation has not gone unnoticed; a country which cannot reach a consensus on a national language was attempting to force a national drink down the throats of its people. At present, the government has gone silent (some media reports say biding their time) on this whole national drink business. And the battle is still on, the Tea Board clamouring for exalted status, with others crying it down with their own choice of beverage, including coconut water and sugarcane juice.

Coffee on the other hand, was a not-so-common drink, expensive and consumed mainly in the southern states (locally called kapi), closer to the coffee plantation areas. It was this way till the first coffee shop Café Coffee Day opened in 1996, an exciting novelty. Suddenly coffee was hip and the preferred drink of young people everywhere in India. And tea, not so much anymore. With its various avatars, served hot and cold, with additions like chocolate sauce, cinnamon powder and even ice cream, coffee became all the rage despite high prices (starting from Rs. 80 or Dh5.5 for a cup). And the Barista chain followed soon, with outlets stocking newspapers and magazines, guitars and board games.

And it was not just the coffee that got in the young – the high spenders in this category – in droves. These cafes served a strong need gap, a place where people could linger all day over just a cup of coffee, book or laptop in hand. Coffee shops became the cool place to “hang out” with friends, conduct business meetings and even acted as venues for the traditional boy meeting girl for an arranged match. Today, Café Coffee Day (or CCD, as it is referred to) has over 1,200 outlets all over the country and is opening a new outlet almost every week.

As opposed to that, tea is mostly seen as the beverage made and consumed every morning at home or found in small roadside shops where people stop for a quick cuppa. It is also possible that Indian consumers have not developed a taste for flavoured teas / tisanes and still equate it with chai (brewed with milk and sugar). So what tea is floundering against now is not just another beverage but the young, peppy image that coffee has created for itself.

However, tea industry experts are not all that pessimistic. Sandeep Subramani, founder of Tranquilitea plantations and resort says, “We see a lot of people particularly in the age group of 15 to 35 moving over to coffee not just for the beverage but also the overall experience. However it does seem that a lot of them return to tea in their mid thirties. Perhaps this is when when people get more health conscious and are also looking to improve their wellbeing and quality of life. So the pattern of tea drinking in the country in the long term would remain steady and may even grow in the future. A major driving force for this is definitely the undeniable fact that tea is good for health.” 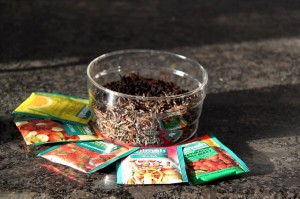 So in the midst of all the brouhaha over coffee, national drink or not, tea has been slowly making its way back into the consciousness of the young and affluent. And this has not been in a role it used to play in the past, that of a cheap stimulant beverage. There is a willingness to experiment with flavours and strength. The British tea company, Twinings, has recently come into India, beginning their launch with workshops to explain the finer nuances of teas, pairing each with different food flavours, much like wine.

There have also been several tea cafes and lounges that have mushroomed in the larger cities. They provide short eats along with a range of teas, and, unlike coffee shops, attract a slightly older, professional customer base. And tea estates are offering plantation holidays in places like Darjeeling in the East and Ooty in the South.

Tea is certainly not new to India. There are varying accounts of when and where tea was first cultivated here but most sources agree that it has been growing in the wild in the North Eastern areas since the 12th century. Although it was used for medicinal purposes by locals, this plant went largely unnoticed otherwise.

It was only in 1833 that Scotsman Charles Bruce discovered that the tea from India was of high quality, worthy enough to be exported back to the UK. And so began tea cultivation in India, managed entirely by the British. In the early 1890s, tea slowly began to get popular among locals too and when the railways came, consumption only increased accordingly, thanks to stalls in every station large or small. 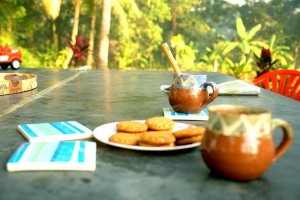 When the British left, Indians took over the industry with ease and, since 1947, the tea production in India has increased by 250 per cent. After China, India is today the largest producer of tea with a cultivation of almost 990 million kilograms in 2011. Of this, roughly 20 per cent is exported and the rest consumed within India. This industry employs more than 2 million people in the plantations and factories, most of them in Assam and Darjeeling in the East/North East and in the Nilgiris in the South.

At present, there is tea on one hand, slowly brewing and dipping its way back into the popularity stakes and on the other, coffee that is getting more and more expensive but still popular among big spender groups like teenagers. And so, the battle of the beverages goes on.

A taste of Twinings

A pocketful of history

4 thoughts on “Battle of the beverages”