The cradle of Indian temple architecture. Before I leave for the Chalukya temples of north Karnataka, I come across this phrase in all the guidebooks I read. And once there, I find that this phrase rolls off the tongues of tourist guides with a practiced smoothness. And not just cradle; other well-worn metaphors like abacus and blackboard too are soon pouring out of my ears. Alright, I get the point. The sculptors learnt, slowly and painfully, to carve these magnificent temples (or groan, ‘epics in stone’, as my guide would say), using nothing but their imaginations. And the patronage of their Chalukya rulers, especially Pulakesi I.

Pulakesi I is the kind of ruler we today would call a dude. Back then, in the 6th century A.D, he built over a hundred temples across his kingdom, stopping briefly from time to time only to conquer and annex further kingdoms to his own. At the height of his reign, he ruled a vast swathe of the south of India, extending all the way to what is now Maharashtra in the west and Orissa in the east. And the architecture in his temples reflects the influences from diverse parts of his empire.

The Chalukya temples comprise three main groups: those in Aihole, Badami and Pattadakal. For centuries, these temples have remained in the shadow of their more famous cousins in Hampi, built much later and just over 100 kilometers away. And it remains so even now, even though Pattadakal was declared a UNESCO world heritage site in 1987 and the other two are now in the running. 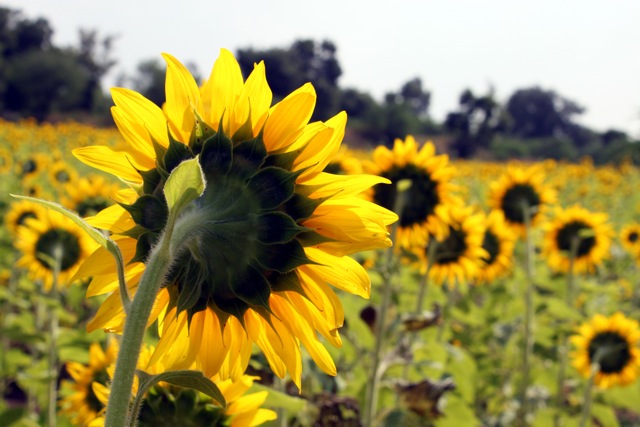 I first head to Aihole, a bumpy ride through roads lined with sunflower fields glowing in the mild morning sunlight. This route is more the dreamy countryside of North India – immortalised by countless Hindi movies where the heroine dances to a catchy tune waving her yellow chiffon sari in the wind – than the rough and ready landscape of Karnataka. At the entrance to the temple complex, Basava waves his tourist guide badge and latches on to us. As an introduction to Aihole, he says that on the skills scale, this group ranks as elementary school, since according to him (and experts, I presume), the architecture and carvings are at a very basic level here – going up to college level in Pattadakkal. 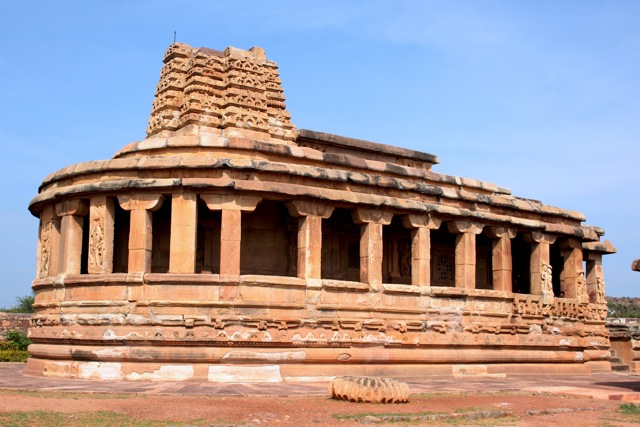 Many of the original hundred temples survive in Aihole today, though some of them lie hidden behind thorny bushes, dusty rubble and thatched huts. Aihole, which served as the capital of the Chalukyas for two centuries, is today a forgotten village, the locals looking with wonder at the way we tourists look at their temples. Living in the middle of so much grandeur, they have come to take it for granted.

There is nothing elementary about the first temple I step into, dedicated to Durga, the all-powerful goddess. The sun has just begun to climb up into the sky, as a bunch of giggling school children make their way into the temple, shepherded by a couple of teachers trying their best to keep them in control. The walls and ceiling are covered with intricate carvings of gods, goddesses, demons and animals. None of the other temples here were consecrated since they were meant to be only learning models; the experimentation is obvious from the different shapes and sizes of the temples dotting the landscape. Behind it stands the 7th century Lad Khan temple, which folklore says, owes its name to a Muslim noble who lived in the temple during the British rule. 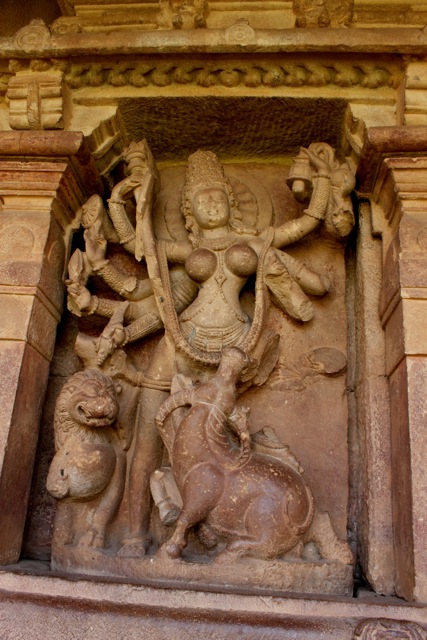 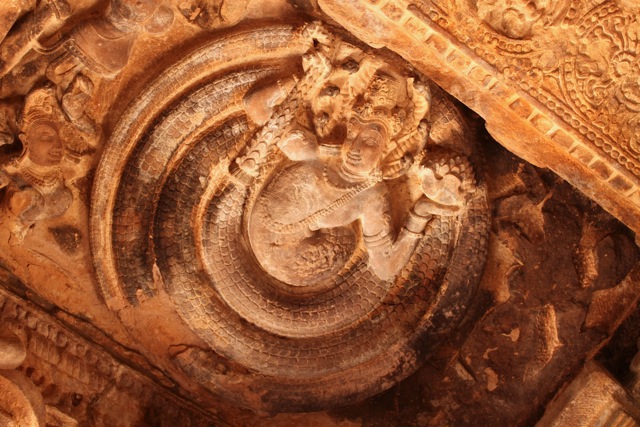 And outside the temple complex is another interesting tableau: the village market under the sprawling banyan tree. Fruit sellers, vendors of soda, fresh buttermilk and coconut water, kids hawking picture postcards – everything is geared to the odd tourist who finds his way into Aihole. Every lane I wander into has a few ruins, a cluster of broken temple steps or an occasional intact statue scattered about. In this setting, it is easy to wonder if every large stone lying along the road dates back several centuries.

And then on to Badami. It is believed that Badami gets its name from Vatapi, a demon who lived in the region, and in the manner of all self-respecting demons, terrorised the locals. Why that should be so in a country with enough gods to name all towns and villages, and still have some left over, is of course a mystery. The more likely explanation for the name reveals itself as I near the town; the sandstone hills around the region reflect the colour of almonds – Badam in most Indian languages.

In Badami, I climb up the hill where the famous cave temples are located. As I huff and puff my way up the steps, I am accompanied by a posse of monkeys who seem to think that they have a right to anything I am carrying in my hand, camera included. They play tag with a bottle of Coke and then, in front of my astonished eyes, twist the cap and drink straight from the bottle. The kids all around, who have been complaining loudly of boredom (these are old temples after all, not the most entertaining places for children) watch enraptured and parents have a tough time dragging them back down the hill.

Badami has four cave temples, each with a beautiful mélange of statues, primarily of Vishnu and Shiva. I almost get a crick in my neck, straining to look up at the ceilings covered with frescoes painted from glorious natural dyes, which even the passage of time has not managed to fade.

The first cave has what is possibly my favourite image from all the temples, Shiva as Nataraja, the god of dance, with 81 classical dance poses carved in a single statue. I know this because I have read about it, but I am just not able to make out more than a few. And so I eavesdrop shamelessly on the guide pointing out the various poses to the couple standing next to me. And on the opposite wall is a statue of Ardhanarishwara – literally ‘the half woman god’ – signifying the primal and equal partnership between Shiva and his consort Parvati; the right side of the statue is an all angled and sinewy male while the left is a soft and curvy female form. 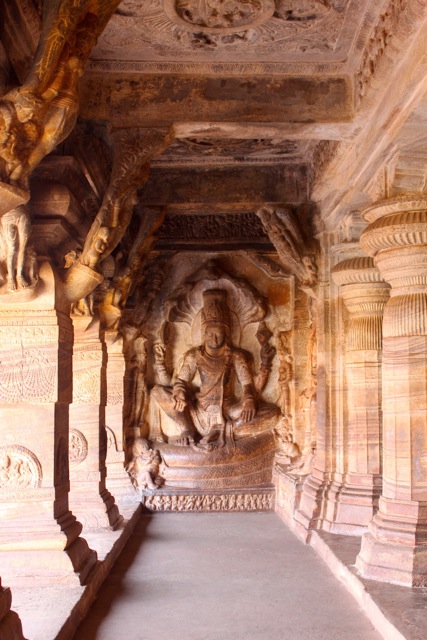 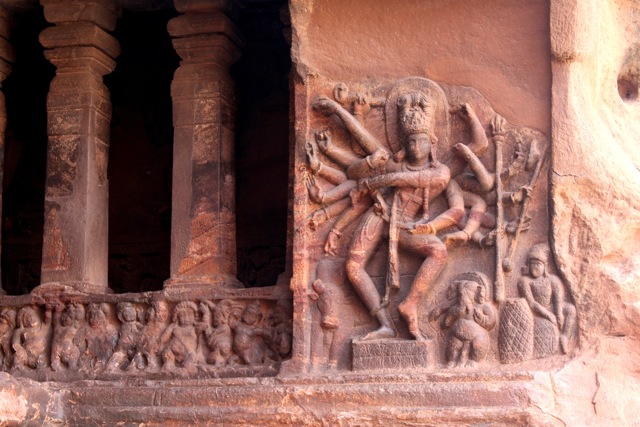 Pattadakal, my final destination, is clearly higher up on the architectural learning curve given the sophistication of the structures here. This cluster of ten temples – one of them a Jain sanctuary – was built between the 7th and 9th centuries when the royal sculptors had honed their skills considerably. It is late evening when I get there and the setting sun casts it golden rays on the temple walls, making the old sandstone gleam as if burnished specially for my visit. 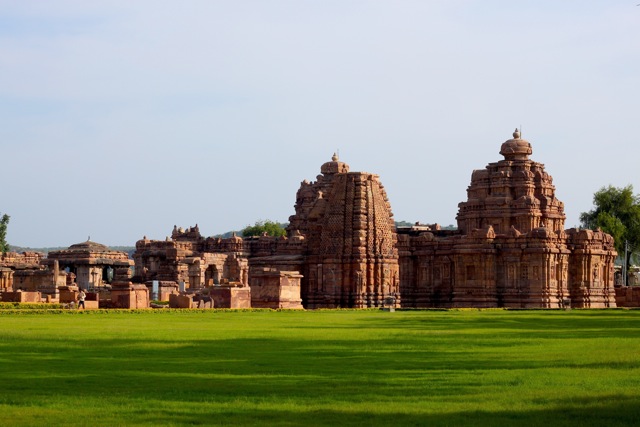 Today, the Archeological Survey of India does a wonderful job of maintaining this temple complex (along with those at Aihole and Badami). According to a local official, the sculptors managed to bring in the best elements of north and south Indian architecture to this group. Pattadakal also served as the Chalukyan capital for some time, though historians say that it was used mainly during special occasions like festivals and coronations. Indeed, the name itself translates into coronation stone (pattada kallu).

Among the temples, I linger at the almost perfect 8th century Virupaksha, dedicated to Shiva. Built by Queen Lokamahadevi to honour her husband’s victory in war over the Pallavas, it is considered a masterpiece of Chalukya architecture. Later, I spend some time by the banks of the Malaprabha river which flows right behind the temple complex, bearing silent witness to centuries of splendour. 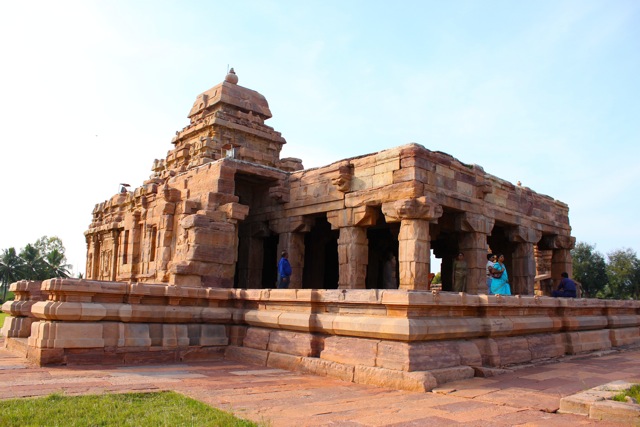 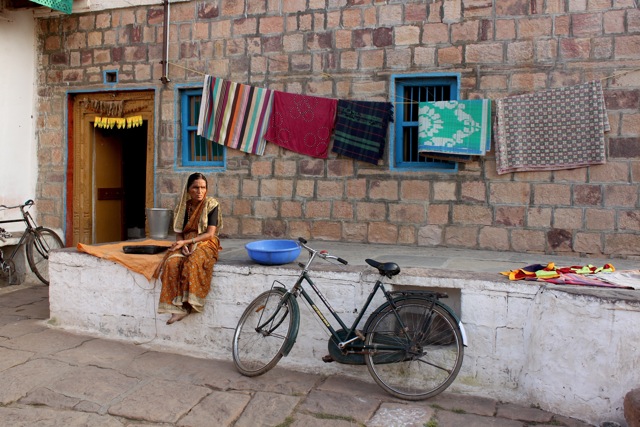 Surprisingly, I am not all templed out by the end of the trip, as I had expected. Each of these towns and temple clusters has been a different experience. And as for the stock guidebook phrase, what can I say? If such magnificence is the stuff of cradles, then bring on more of them.

***
Published in the August issue of Jet Wings, the inflight magazine of Jet Airlines as An Inheritance In Stone.