My food walk in Rome begins with a near death-by-dessert experience.

It is a balmy summer morning and our small group has met in front of a bar in Testaccio. Our guide Domenico is talking to a British couple, waving his hands volubly in what I have come to think of as the Italian Sweep. I am there for a neighbourhood food walk that promises to introduce me to “Rome’s unsung food heroes.”

Tucked away from the bustle of touristy Rome, Testaccio is considered a hidden foodie heaven. “In Testaccio, the pace of life is slow and it feels like things never change,” says Kenny Dunn, American settled in Rome and founder of this Eating Italy Food Tour (see eatingitalyfoodtours.com for more information). “The waiters at the local trattorias are as much a part of the place as the art that hangs from the walls; even my butcher is third generation.”

It is a good thing they tell you not to have breakfast. On this tour, breakfast is a cornetto (an Italian croissant, significantly less buttery but just as flaky) and a tiramisu at Barberini, open since 1955. Isn’t tiramisu for breakfast a bit too much, even for the La Dolce Vita people? Apparently not; they even serve it in little cups made of chocolate. Given the heady smell of pastries and the alluring counter displays, it is only the promise of better things to come that helps me walk out.

Next comes Volpetti Più, where we try slices of Margherita pizza, ranked third best in Rome (and don’t ask me how they judge these things). They sell pizza al taglio; you just show the guy behind the counter how much pizza you want and he weighs it and bills you for it. The story of this pizza is the story of how Naples transported Italy’s flag on to its food. In 1889, when Queen Margherita of Savoy visited Naples, chef Raffaele Esposito threw slices of tomato, mozzarella and basil on a pizza. The queen loved it and a classic was born. 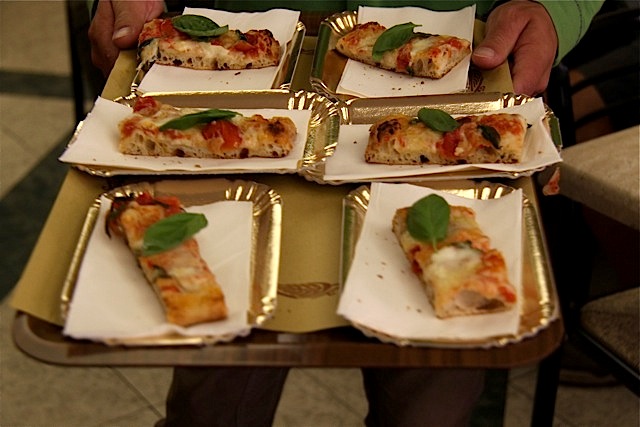 Just around the corner is the Volpetti shop, one of the best gourmet food shops in Rome. Run by the Volpetti family (of aforementioned Volpetti Più fame) for over forty years now, the shop stocks various kinds of meat, pasta, olives, balsamic vinegar and over 150 varieties of cheese. We taste a few of them—the soft, intense, crumbly, salty tastes playing off one another—and local prosciutto and salami. Their tagline is ‘Pleasures of the table’. Indeed. 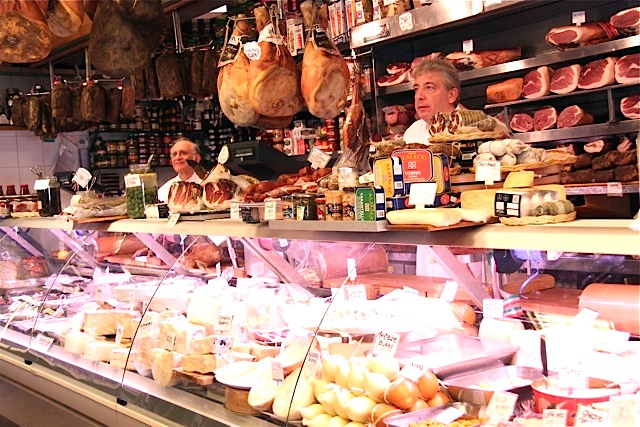 One of the highlights of the walk is the newly relocated Testaccio fresh food market, patronized by locals. All the produce at this spotlessly clean market is of the ‘from farm to fork’ variety. The butchers, fishmongers, vegetable and fruit vendors, bakers wave us all a cheery Ciao! I take an instant liking to Cesare, the bald butcher with his broad grin. He proudly shows us old newspaper cuttings about the shop, and photographs of his younger self, with a full head of thick black hair. 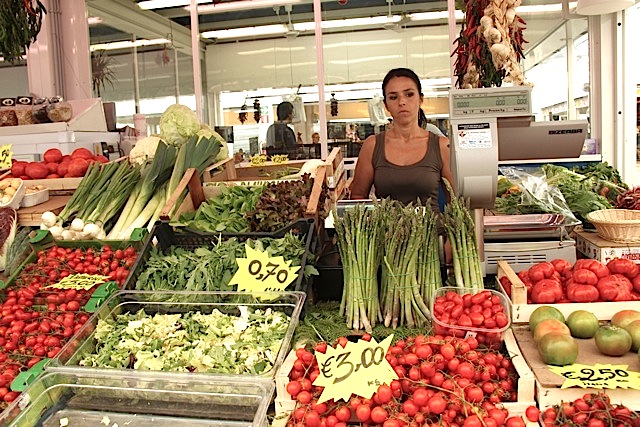 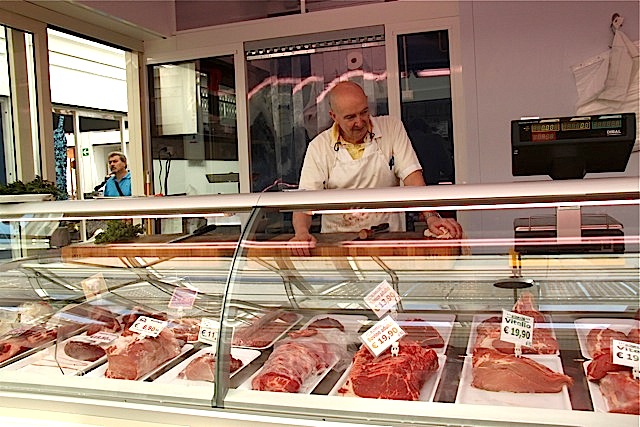 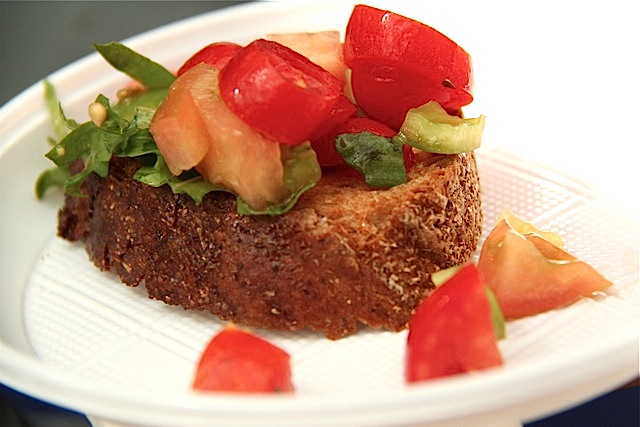 Domenico picks up some cherry tomatoes and herbs from a stall and leads us to Francesco and Paula’s, where he hands us sliced baguette and a pod of garlic to make our own bruschetta. We rub the garlic on the crisp bread, top it up with the sliced tomatoes and bite into it. Oh, the sweet, sweet cherry tomatoes. And right after this, some melt-in-your-mouth mozzarella di bufala (buffalo mozzarella) at Luna and Enzo’s shop. At the first bite, the creamy juices flow into my mouth, dribble down the sides and I know I can never be happy with any other cheese again. 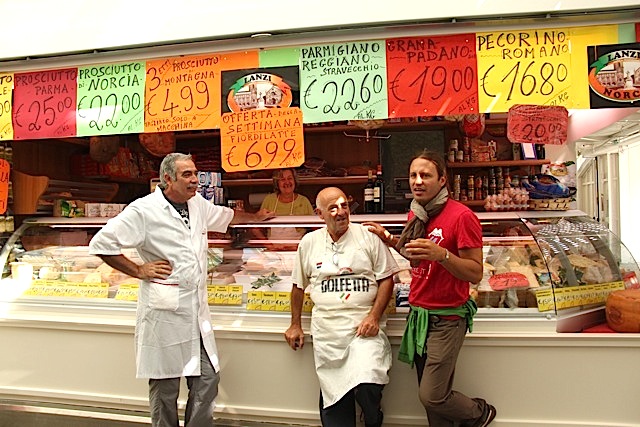 The final halt in the market is for cannoli, a Sicilian dessert at Dess’Art, where Constanza behind the counter fills in the ricotta cheese fresh just before we eat them. “Leave the gun, take the cannoli,” said Peter Clemenza wisely, in The Godfather right after a killing. That single line captures the soul of Sicily, where the sounds of gang warfare mingle in the air with the smells of all that is good about Italian food. 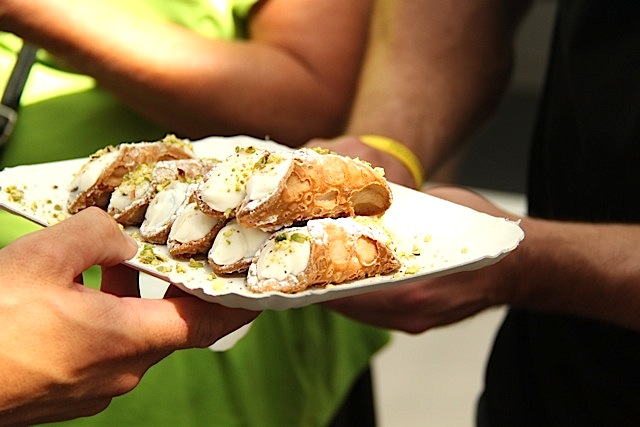 Through all this, Domenico keeps up an interesting commentary about the area, the locals and even his favourite football team. We laugh more heartily than his jokes deserve. This, I suspect, is because of the slight high induced by all that food, and the walk in the sun. For a break from the binge, we make a quick detour to Rome’s only “cemetery for non Catholics” where John Keats and P.B. Shelley are buried.

By this point, nobody is hungry but we walk on, goaded by pure greed; the main meal is yet to come. That’s three different kinds of pasta—carbonara (pasta with egg as a main ingredient in the sauce), pomodoro basilica (tomato and basil) and cacio e pepe (thick spaghetti with cheese and pepper, a traditional Roman pasta) at Flavio al Velavevodetto. The restaurant, dug over centuries out of a hillock made of pieces of broken amphorae, is as interesting as the food. Such spaces, some of them now charming little bistros, were originally used to store wine since they stay cool all the time.

Situated along the river Tiber, Testaccio has a long legacy of food. Many centuries ago, it was a river port where barges delivered staples like grains and olive oil from other provinces. Monte Testaccio, the mound with its embedded shards of jugs is a reminder of the history of this neighbourhood and I can see it through the glass windows by our table.

After that, the thought of food is actually frightening but Rome’s famous suppli—fried rice and meatballs (or vegetables with a rich mozzarella and tomato base for the non meat-eaters)—has not been sampled yet. So there is a pitstop for Suppli Genovese at Pizza 00100, which prides itself on a recommendation in the New York Times. Think of a typical Mumbai vada (which goes into a pav) with rice instead of potato and there you have suppli, without the spice but with enough flavour to make my taste buds sing in rapture.

There is one final stop, for gelato at Giolitti, which has been serving little scoops of bliss for over a century. Each of us gets to choose two flavours for a cup but only after a nod of approval from the man handing out the gelato. Eating flavours that don’t go together is sacrilege. And who am I to argue? Giolitti has been making gelato at this same spot since 1914 and last year, the Mayor of Rome declared it a “historic business of excellence,” awarded only to establishments over eighty years old, fourth generation and the best in their class.

Kenny says about the idea behind this tour, “I began taking all my house guests to the bar where I get my morning cappuccino and I introduced them to Nonna Maria, the 83-year-old woman who sells me my tomatoes. And I made sure they didn’t leave without tasting my favourite slice of pizza that is topped with figs and prosciutto. These were the Rome experiences my guests remembered the most.”

And that is not very surprising.

***
Published in the August issue of Outlook Traveller. Read Roman Banquet online here – or grab a copy off the stands now!