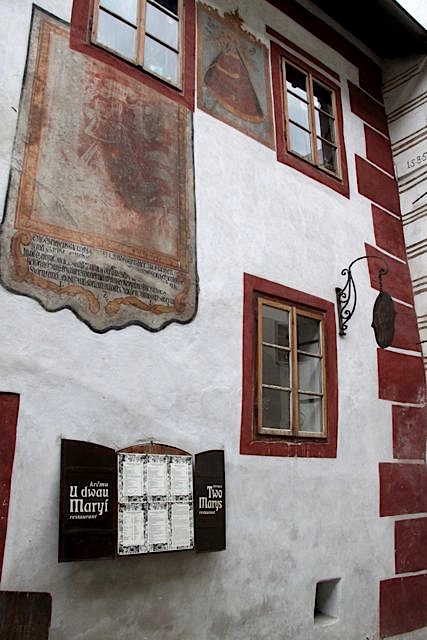 As we walk through the small Bohemian town of Cesky Krumlov in search of the Laibon, my husband and I discover the Two Marys (U Dwau Maryi) right next to it. Like many restaurants in the west, the menu is posted outside.

A quick glance and we decide to go in for the vegetarian special meal, served on wooden tables right by the Vltava river. This space merges seamlessly into the Laibon next door, from where the waiter walks over and suggests that we try his restaurant for dinner. Everything in this town is just as casual and laidback. 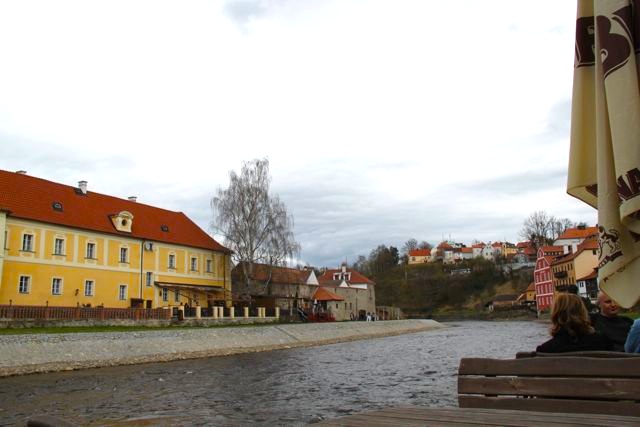 At lunch, we have a chance meeting with a British expat who made Cesky Krumlov home after his first visit there on work. He now spends half the year in Krumlov, in his little house by the river and talks endlessly about the good life there. He knows the best restaurants and pubs and generously shares his secret discoveries with us. That is how we end up thumping tables with locals at a pub, as a boisterous gypsy band plays on, that evening . 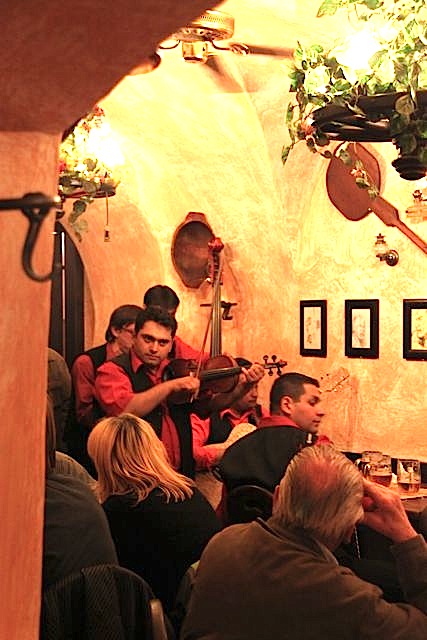 I remember laughing in a superior manner when I read some blogs in which writers declared that they were “In Love with Krumlov.” Now I know what they mean; it is so easy to fall in love with this town. Cesky Krumlov is the kind of place where, ten minutes after you begin exploring, your thoughts wander to that retirement home you have always been dreaming about. 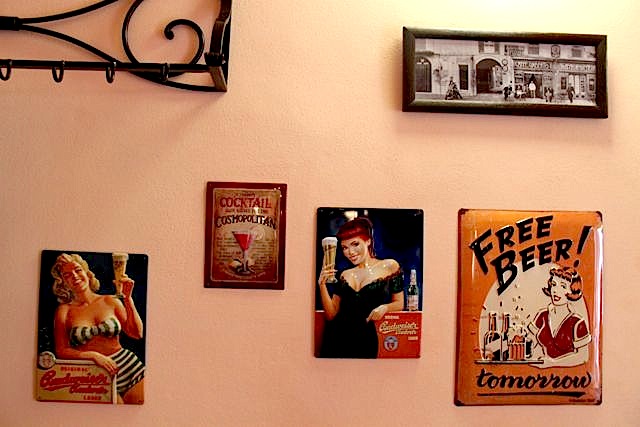 This UNESCO heritage town is so picturesque that it often takes on fairytale qualities in my mind. Any minute I expect the wicked witch to whiz past on her broom. But there are no witches here; only friendly locals who have taken the sudden interest their town has evoked in their stride. They give us warm smiles and leave us alone, as they chug down their cold beer — remember this country is the original home of Pilsner and Budweiser.

It is ironic that Prague survived World War II almost without any damage. And Cesky Krumlov, once an important trading post and home to the most prominent Czech noble families, fell into decay during the Communist regime. But it has bounced back with seeming ease. Today, as we walk through the narrow cobblestone lanes, there is nothing but beauty all around us — in the gabled houses, in the shops displaying quirky things for sale, in the trdelnik (a tongue-twistingly delicious Czech dessert) stalls on the street and above all, in the views of the Vltava and the distant blue hills. 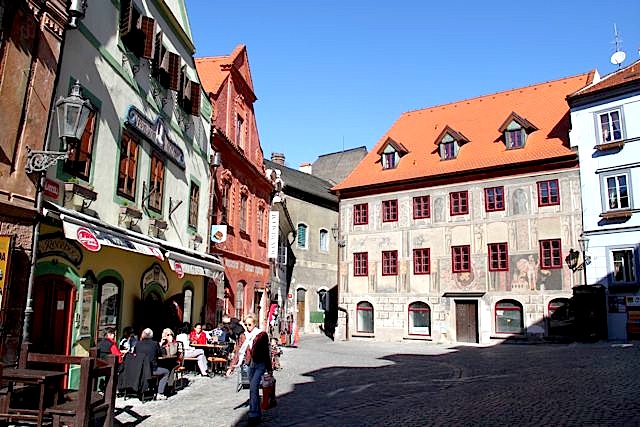 The 13th century castle complex is the second largest in the Czech Republic, after the one in Prague, and dominates the town. Unless you take a guided tour, there is nothing much to see inside the main castle itself but for some excellent Renaissance paintings and artefacts from the days of royalty. We huff and puff our way up a flight of narrow and winding steps to the top of the castle tower. And are rewarded with more spectacular views of the Vltava snaking through the town (I cannot get enough of it) and the red tile-roofed buildings scattered as if by a careless hand. 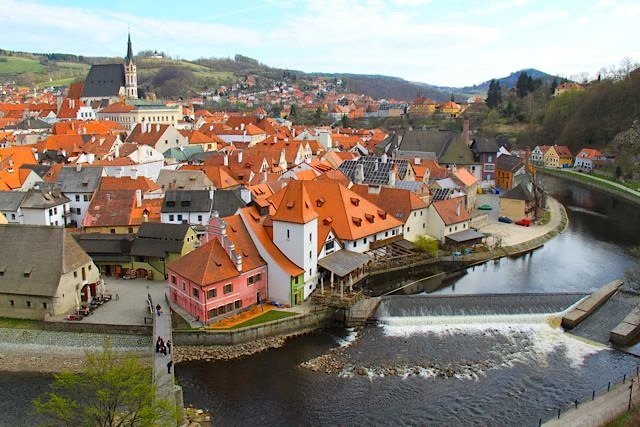 After an evening of aimless wandering, we return to Laibon for dinner. It may have an international vegetarian menu but we resolutely refuse to have pakoras and instead order an assorted platter and wait for the castle to be lit up. It is still early evening and David, who owns and manages the restaurant, stops by to chat. It turns out that David has travelled all around the world and has spent several months in India — ah, that explains the pakoras . He even manages a cheeky vanakkam when he discovers I am from Chennai. As we eat, the castle lights come on, casting warm reflections on the river. At that moment, I cannot think of a better way to spend a spring evening. 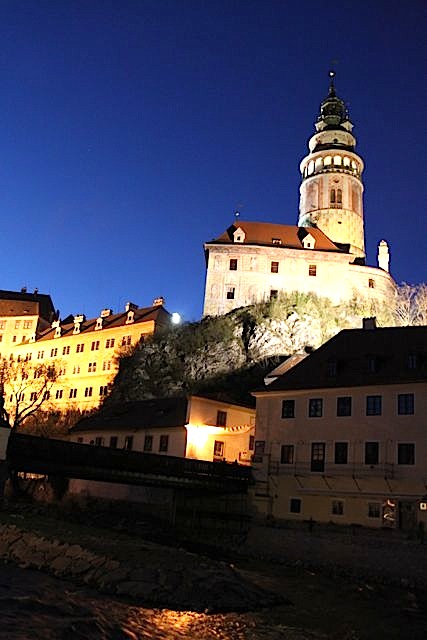 Krumlov is an all-weather destination. Springtime means pleasant weather, lesser crowds, better hotel rates and bright flowers everywhere. In winter, I am told, the entire town is blanketed by powdery snow, raising the fairytale aura several notches. Come summer and the streets buzz constantly with music performances, street theatre and even costumed processions. The best time to be in Cesky Krumlov is during one of the major cultural festivals “Magical Krumlov” heralding the arrival of Spring, (this year) on April 30 and May 1 or the “Five-petalled Rose Festival” in June, which celebrates its Renaissance past.

Most people treat this town as a day trip out of Prague but I recommend at least a couple of days there. Cesky Krumlov is actually Prague in miniature; it has all the charm and the attractions of the larger city, without the crowd and tricksters. At least not yet. So I suggest you head there before the tour groups and Bollywood location scouts do. 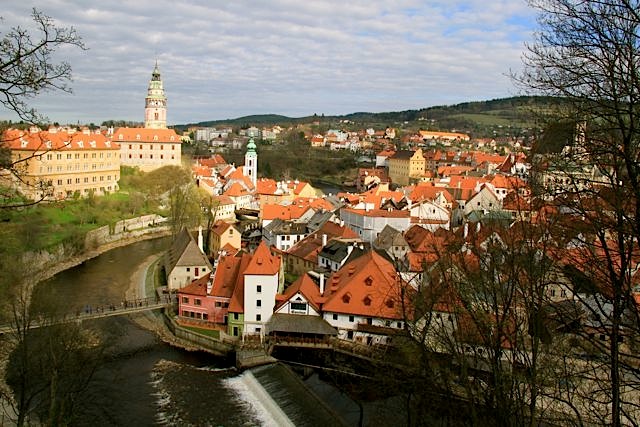 ***
Published in The Hindu Sunday Magazine on August 25…