It was the summer of the tiger at Pench. True, just one tiger – the Baghin Nala Alpha Male. But then, when I go to National Parks in India, I am happy to see all kinds of fauna. Even the omnipresent chital and langur. 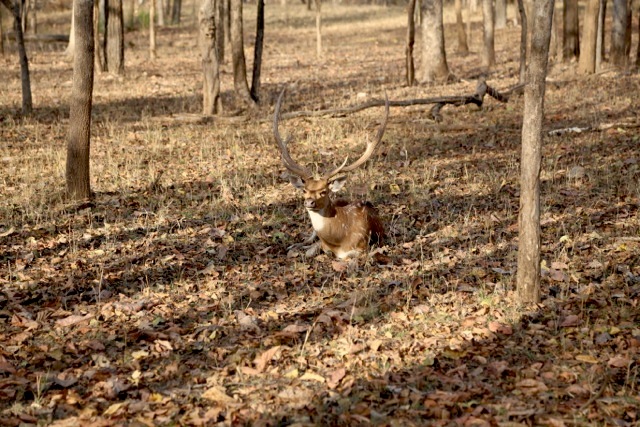 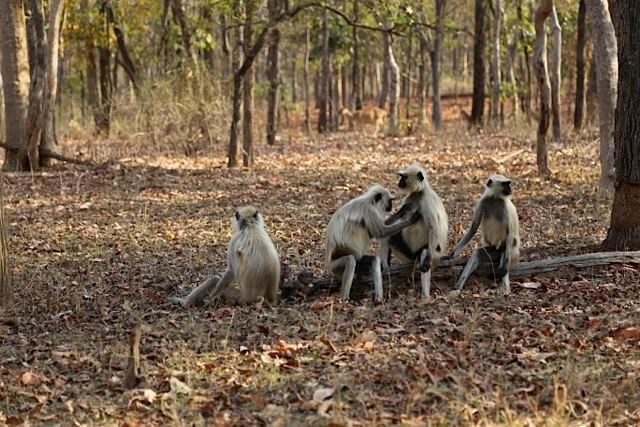 Pench is one of the newer Tiger Reserves in India, created in 1992, the 19th to be brought under Project Tiger. According to MP Tourism, Pench Tiger Reserve spans a wide area including the Indira Priyadarshini Pench National Park, the Mowgli Pench Sanctuary and a buffer zone. It is spread across the states of Madhya Pradesh and Maharashtra, although only the former is geared towards tourists.

And notice the ‘Mowgli?’ It is believed that Pench was the original setting and the inspiration for Rudyard Kipling’s very popular Jungle Book. And if like me, you grew up reading and watching Jungle Book multiple times and never having enough of Mowgli and Bagheera and Baloo (how adorable was that dance?), that is reason enough for you to visit. And of course, the fact that you might run into Shere Khan – at last count, there are 35 tigers inside this reserve.

A word about this – it is also believed that Kanha was the original Jungle Book territory and not Pench, and both have their supporters and both places milk the Kipling connection to the utmost. That being said, we need to remember that a century ago, these were all one long forest belt and therefore, more or less, all of it Kipling country.

Of course, it was scorching hot, but we had gone in the hopes of seeing tigers come out towards the many water bodies inside the Reserve. Our only tiger sighting was on our very first drive into Pench, on a hot hot afternoon when every single life form inside the forest seemed to have gone into hiding from the ferocity of the sun. Just thirty minutes into our safari, we heard feeble alarm cries from the spotted deer, soon joined by langur and peacocks. And before we knew it, the entire area burst into cacophony. We waited patiently for the tiger that we knew was somewhere in the area – we could not see him but the prey could smell and sense him clearly. And then he emerged from the bushes and walked across the dry land before disappearing into the thickets. 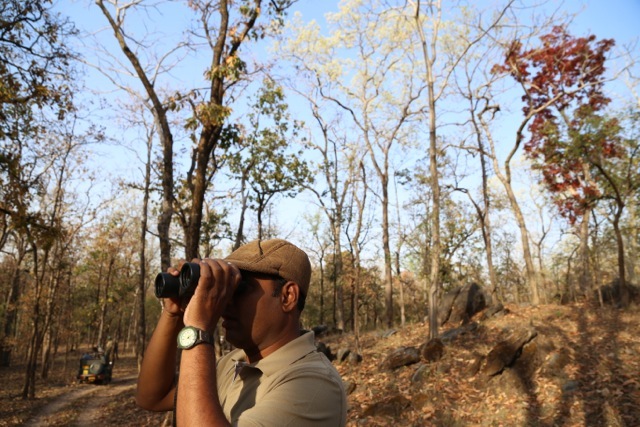 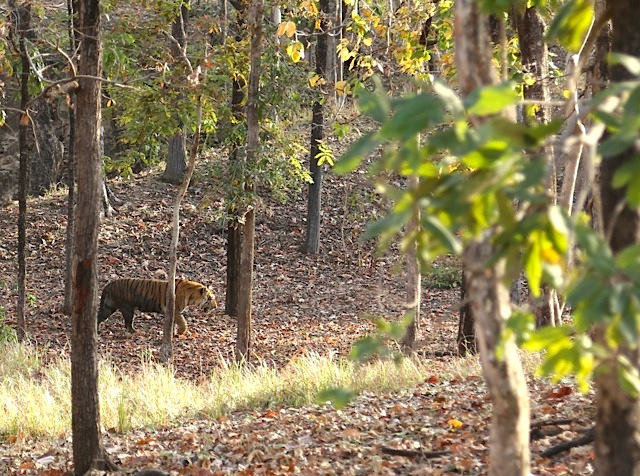 No luck with tigers during the other drives but we saw jackals and wild dogs (dhole) for the first time. Two dhole had just made a kill and were eating while the jackal hovered around them from a distance. And the minute they moved away, he closed in. True to form, the scavenger. And the remaining safaris, we saw jackals each time, once feeding its young. 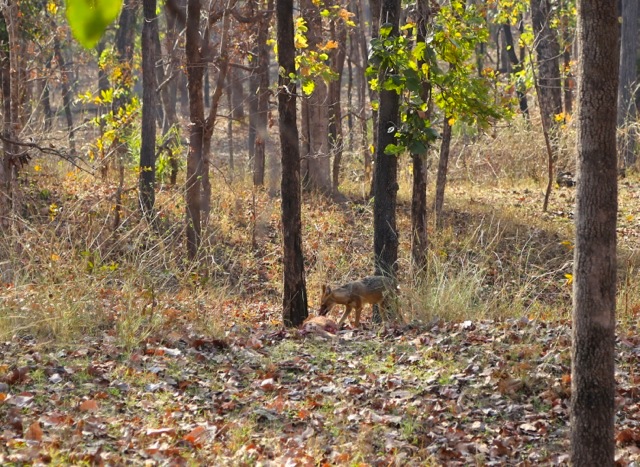 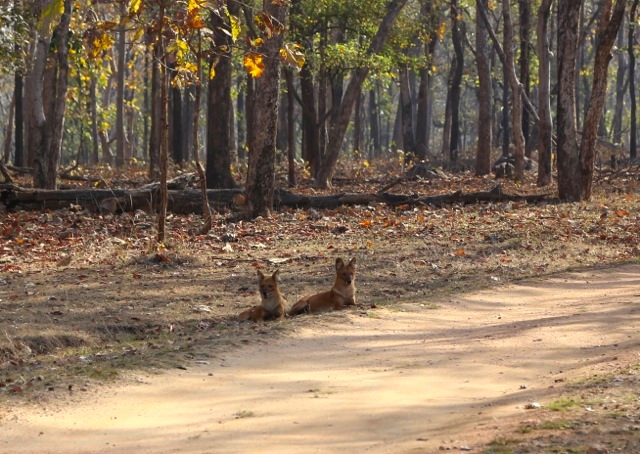 Pench also has the largest number of herbivores in the country, our naturalist says that over 50,000 spotted deer alone grazed within its boundaries. And I can never tire of seeing the gorgeous Indian Roller in flight. And for the first time, I also saw a peacock dancing. I had always thought that peacocks danced during the rains, but according to the naturalist, summers are as good a time as any to catch them at it. 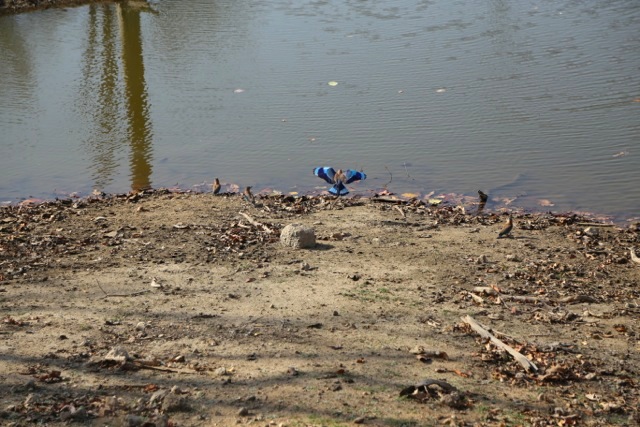 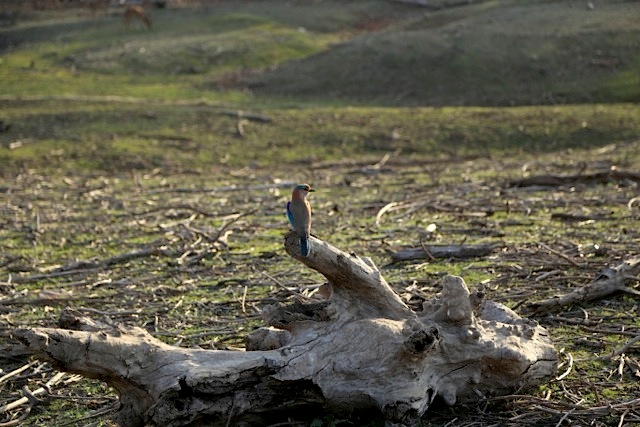 I always love early mornings inside the forest – the silence and stillness in the beginning are like a comforting blanket. And then the jungle begins to wake up to another day and the bustle begins. Like at Panna, our resort had packed a lovely breakfast on both days and we stopped at the designated spot to tuck into it. Parathas and poha, even if cold, never taste so good as after a few hours of bumpy drive through a forest.

But for Panna, my visits to National Parks have been during the summer – a time of barren trees, fallen leaves (sometimes in flaming colours), drying water beds, stillness in the air. It is mostly a bed of brown, broken occasionally by a burst of red flowers or leaves here and there or the sudden bright hues of a bird in flight. I would love to go in peak winter to see how the vegetation changes and to see how the animals respond to the changes in season. Next stop, Bandhavgarh! 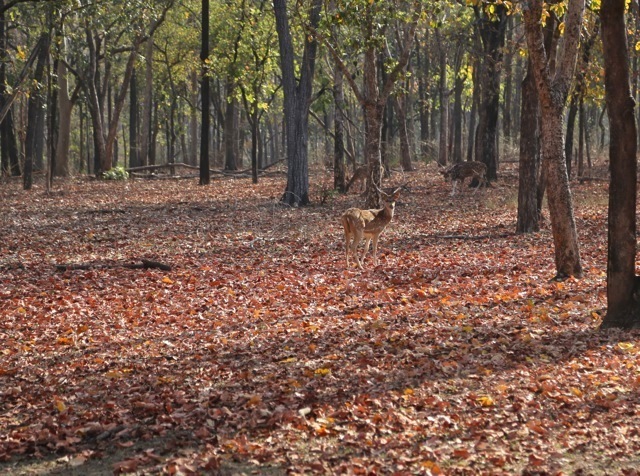 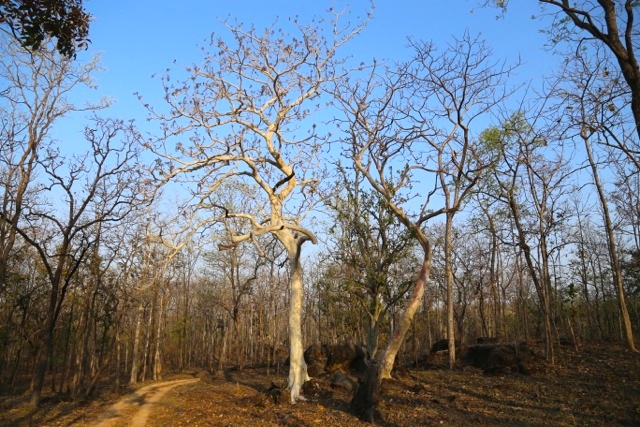 Nagpur is the closest airport and railway station to Pench – it is just over 100 km away, a good 21/2 hours drive over good roads.

The Park is open from October 15 till June 30 – peak season is usually from December till February and during these months, safari bookings are made several weeks in advance since only a limited number of jeeps are allowed each time into the Park.

We stayed at the Pench Jungle Camp – moderately priced, friendly staff, good naturalist, option of staying in a tent or a room (we chose the tent at the far end of the property) – my only complaint was with the food.

For a luxury experience, stay at Baghvan from Taj Safaris – the service is impeccable and the naturalists are the best in the business.

He went to MP…

8 thoughts on “A weekend at Pench”