“Now this is the site where the body of Jack the Ripper’s fifth victim was found,” declares Emily, my guide at the Eating London food tour. That gets our complete attention. Standing in front of the modern car park at White’s Row, we silently contemplate Mary Jane Kelly’s gruesome end.

In London’s East End, there is no getting away from the Ripper legend.

Jack the Ripper was by no means the world’s scariest or most prolific serial killer, but he was certainly one of the most famous during his time and remains so after all these years. This is largely due to East End’s reputation by the mid 19th century for being a hotbed of vice and villainy.

London’s East End has gone through extremely tumultuous changes in London’s recent history. Today, it is one of the most vibrant, Bohemian districts I have visited, in a city that promises a delight in every corner. Yet, the streets of East End remain off the radar for most tourists and even locals. 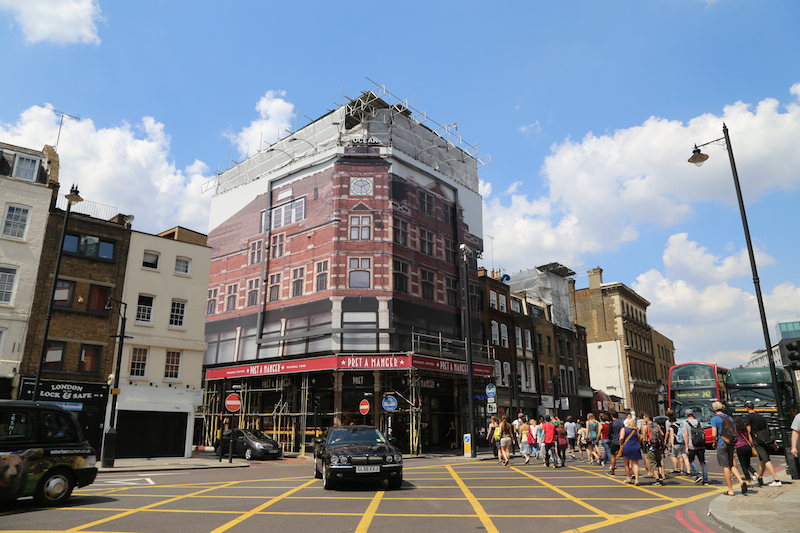 Nicole Monaco of Eating London Tours initially explored various London boroughs before settling on this neighbourhood for their first food walk. She says, “While each was unique in its own right, I couldn’t go past the East End. It is an area so rich in its roots and so culturally diverse that I knew there was no other choice!”

The walk begins at Spitalfields market, one of the oldest in London and most prominent landmarks of this borough. At 10.30 am, Spitalfields is buzzing, with sellers of antiques and bric-a-brac, artisanal cupcakes and organic soups, handmade jewellery and designer clothes, setting up shop. 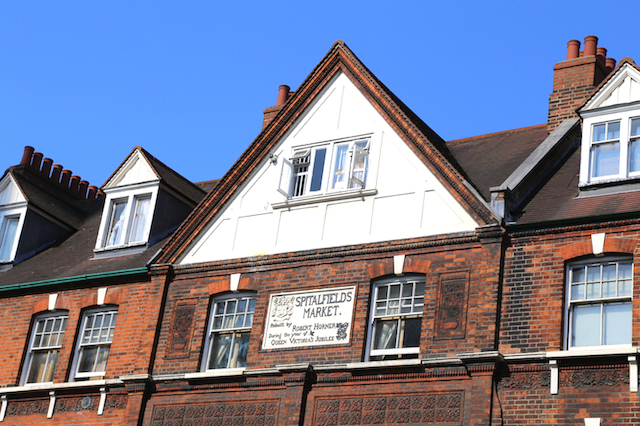 I find the Eating London walk fascinating not just for the food – after all, nobody equates Britain with gourmet meals – but for the passion Emily brings to her stories of East End’s intense history.

The East End has always been welcoming of immigrants and many of them have left a mark on its food scene. First, the Huguenots (Protestants) fleeing France came in around 1685. On our way to Brick Lane, we walk past the grand houses of these fine silk weavers on streets which still bear French names. Then the Irish workers arrived in the mid 1700s seeking employment in the London docks and later on, escaping the local potato famine.

The East European Jewish community fleeing persecution in Poland and Russia found this area a safe haven and stayed there for almost a century from 1880 to 1970, making it one of Europe’s largest Jewish communities. Emily points out the grand ‘Soup kitchen set up for the Jewish poor’ building that fed over 130,000 Jews even in the beginning of the 20th century. 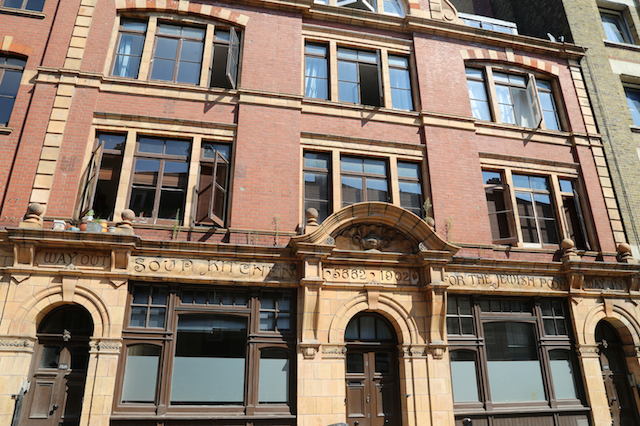 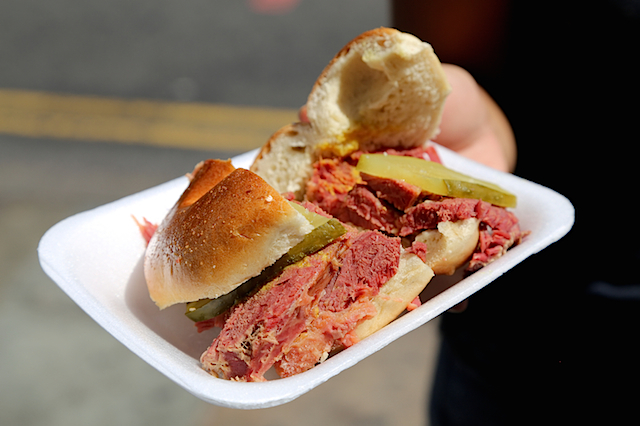 We come across remnants of the area’s Jewish heritage later on in the walk at Beigel Bake – where bagels are boiled before being baked in traditional Jewish style – in Brick Lane, famous for staying open 24 hours a day. 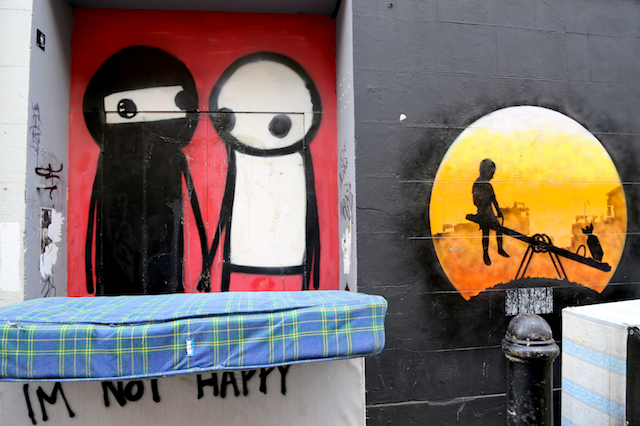 Thanks to popular culture, any mention of Brick Lane immediately brings to mind its Bangladeshi community. Here, it does feel a bit like walking in a market in Mumbai’s Dadar or Delhi’s Sarojini Nagar; the tall tower of Jamme Masjid in the distance, little money transfer kiosks with names like Deshforex and shops selling colourful quick-dry saris. We are here to taste curry – and Britain’s national dish of Chicken Tikka Masala – at Aladin. 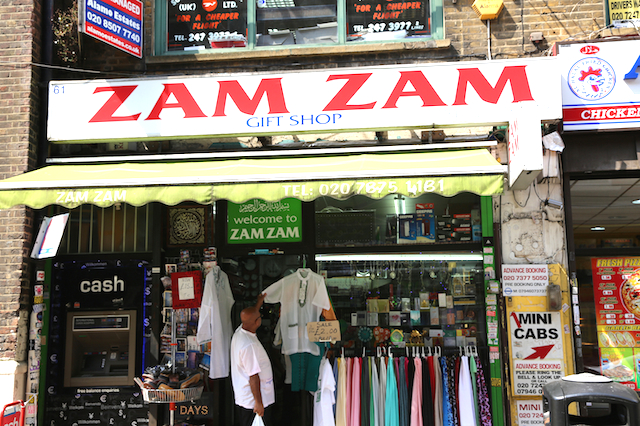 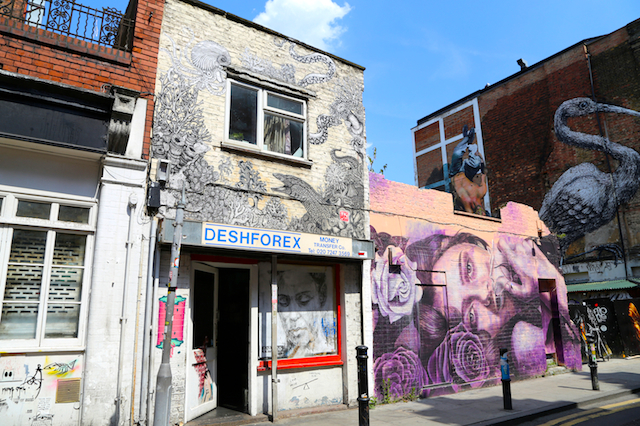 For me, the highlight of Brick Lane is the stunning street art, including UK’s own Banksy and Eine, Belgian artist ROA and Chilean Otto Schade. And the cheerful chaos. If the main street is home to conservative Bangladeshis, the narrow lanes surrounding it attract hipster Londoners with their quirky cafés and trendy boutiques. 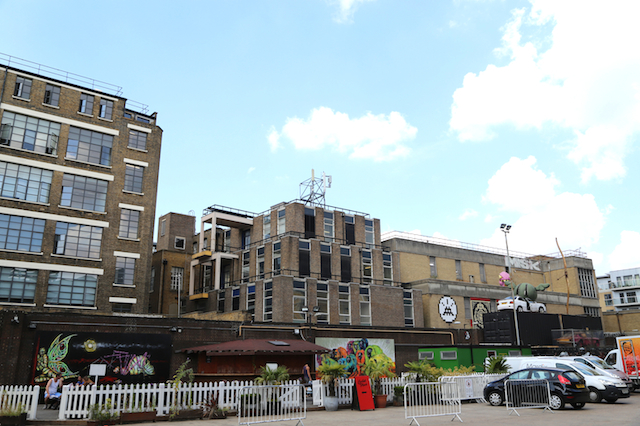 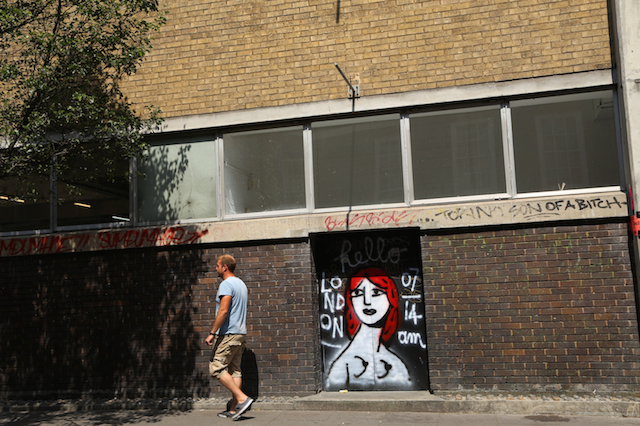 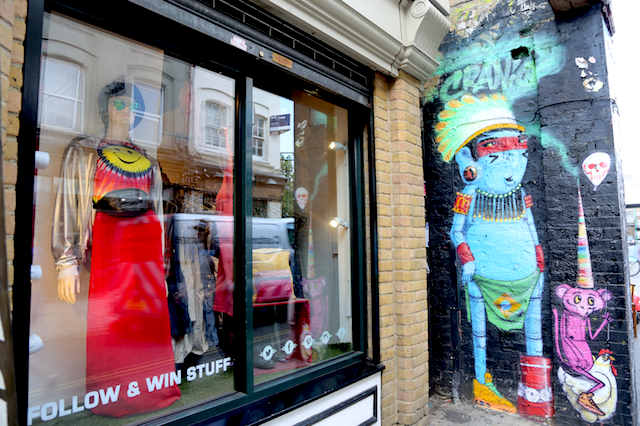 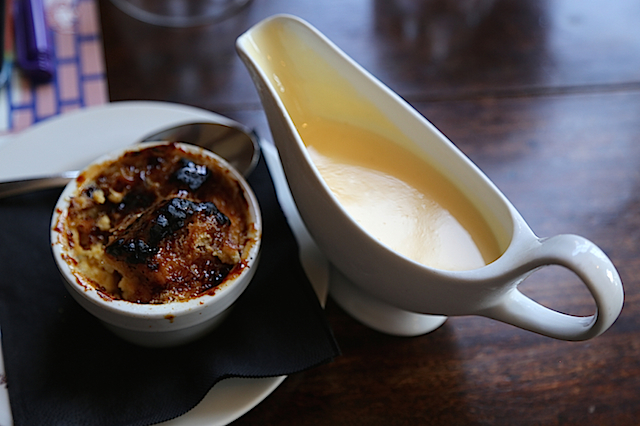 And what is a London food walk without the usual suspects? So, we have bread and butter pudding served piping hot, with generous lashings of vanilla custard, at The English Restaurant.

There is ‘fish and chips’ at Poppies, which is no ordinary cod but a winner at the National Fish and Chip awards. In a country with over 10000 “chippies,” this is no mean feat. I find Poppies enormously charming: the jukebox, the waitresses in cutesy red costumes and the wall posters with Cockney rhyming slang (brown bread for dead, pen and ink for stink). 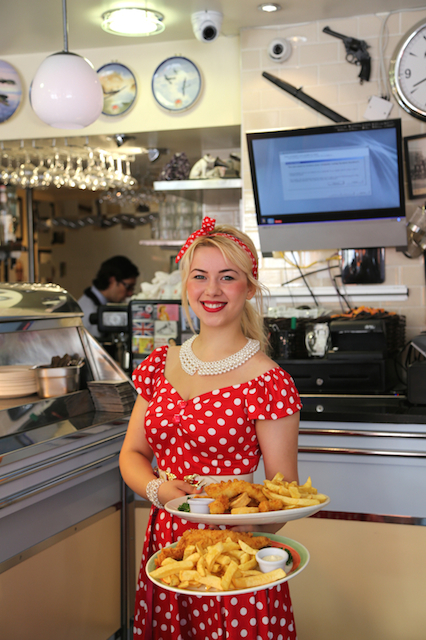 An interesting stop is St John Bread and Wine, which prides itself on its “nose to tail” philosophy. Simply put, its popular chefs follow a democratic – if queasy for me – cooking policy of “no body part left behind.” Luckily, that morning, we are offered only a cured bacon sandwich or poached pear in yoghurt sauce.

My favourite is the final stop at the super tony Pizza East, which I think is the perfect metaphor for this neighbourhood’s gentrification. Sitting on the uncomfortable high stool, I muse on the fact that, from pudding made from stale bread to salted caramel chocolate tart, the East End has come a very long way in just over a hundred years.

~ For more information on this fun food walk in the East End, check out the Eating London Tours website. I went on a food walk with them in Rome a couple of years ago and found that fascinating too. Here is what I wrote about it then – Roman Banquet for Outlook Traveller

3 thoughts on “The East Enders”