When the husband and I were getting ready to travel to Myanmar earlier this year, the only thing I was dreading was the food I would find there. Or, not find. As a vegetarian, I was expecting Myanmar to be a tough place to survive in, and I readied myself for bland salads and the odd pizza, where I could find it.

But being vegetarian in Myanmar turned out to be delightfully easy. The country has a wide repertoire of vegetarian dishes, perhaps because it is culturally closer to South Asia (think Nepalese lentil curries and Sri Lankan coconut gravies) than South East.

And given that it is wedged between countries with rich culinary traditions, like India, China and Thailand, something is certain to have rubbed off. What I discovered is that despite borrowing from these kitchens, Burmese cuisine has its unique flavours. 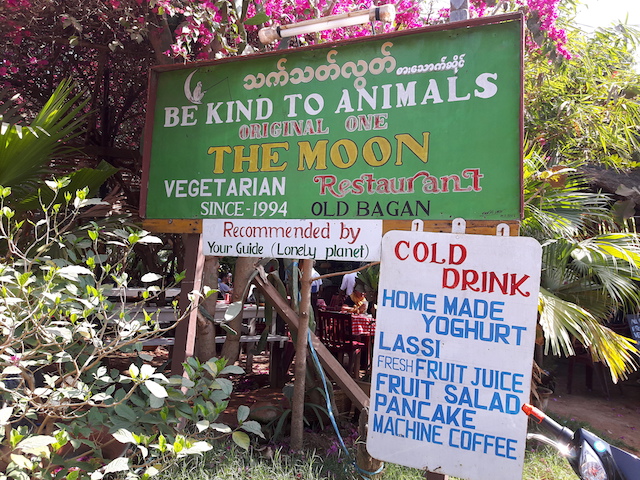 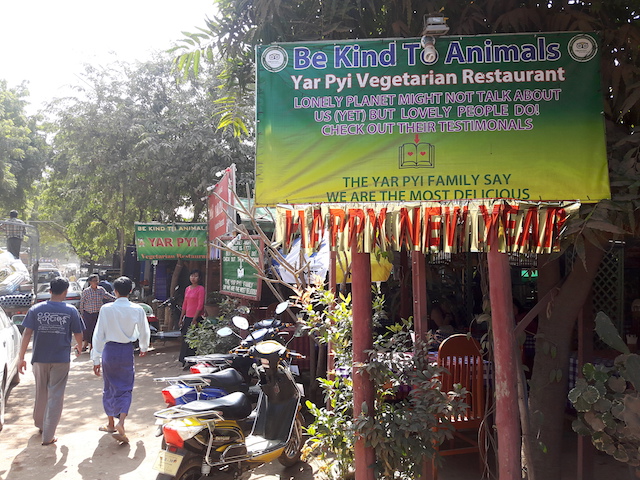 Although vegetable based dishes have always been part of their diet (and vegetarian dishes are served at almost all eateries), vegetarianism as a concept is not understood in Myanmar.

But the magic word “tha tha lo” (thatalo, literally meaning ‘lifeless’ – taught by a traveller friend) opened up the doors to meat-free cooking everywhere in the country. In fact, it made sure that there was never even a hint of the fish sauce that is the bane of vegetarian travellers in South East Asia.

A typical restaurant meal that popular among locals is a spread of side dishes, including raw salads, slightly sautéed veggies and soupy curries, served with plain white rice. This was our first introduction to Burmese food in Yangon, where our guide also ordered dal on the side for us, which came coarsely mashed and lightly spiced; Indian but not quite.

She also got us small plates of green tomato and tealeaf salad, the latter with the warning that the tart taste could take some getting used to. But no, for me, it was love at first bite.

In general, we found the salads and soups so enjoyable that most meals, we skipped the main course and stuck to these.

Through our ten days in Myanmar, we never had to go seeking a pizza place or an Indian restaurant (although some mainstream cafés in touristy towns like Bagan serve Indian food as part of their menu). And to my vegetarian soul, that made Myanmar pure heaven.

Soups in Myanmar can range from the thin clear broth derived from Chinese kitchens (used as palate cleansers and often sipped through the meal), to thick and creamy stews.

The most distinctive one is the Shan Tohu Nuway, a specialty from the Shan region in the eastern side of the country, near Inle Lake. In this soup, the tofu (tohu) is made out of ground chickpea, instead of the more traditional soya.

This mash is kept warm in a semi-liquid form through the day, and poured over the basic noodle broth, finally topped up with coarsely ground peanuts, roasted garlic, finely sliced parsley and cabbage, and for those who can bear the heat, crunchy chilli paste (in my opinion, a must). 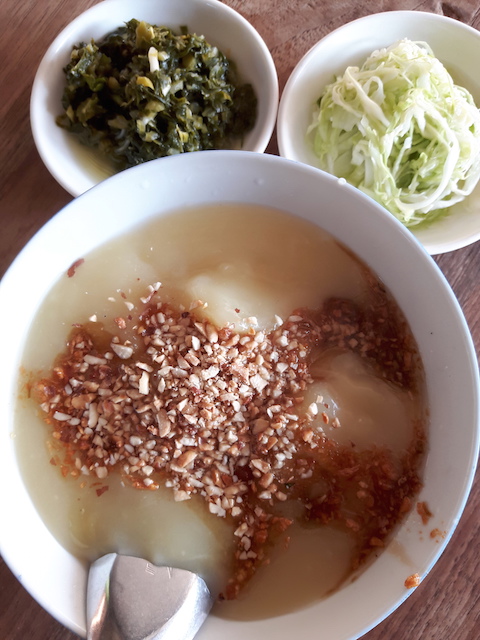 There is also the clear Shan noodle soup, served even at breakfast in most hotels and restaurants. Ask for the tha tha lo version, which comes with a topping of coarsely ground, thick red chilli sauce, spring onions and toasted sesame. 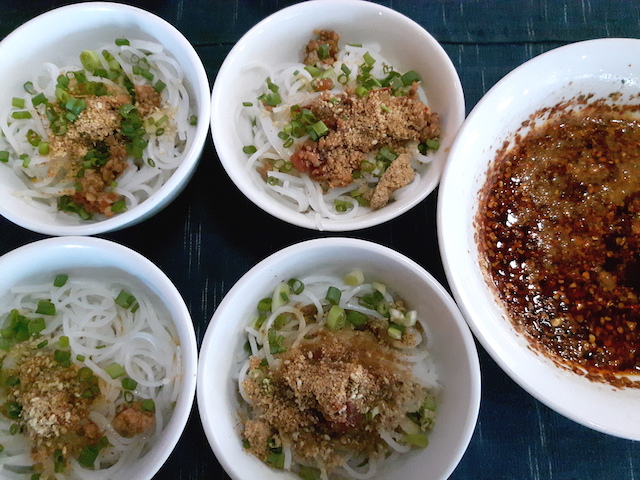 The Burmese have a special skill for taking just about any ingredient and turning it into a delectable salad. Tealeaf, avocado, ginger, lemon, pennywort, eggplant, tomato – the list goes on.

The undisputed star among these is the fermented tealeaf salad (lahpet thok) – slightly tart and tangy with a distinct crunch, the Burmese love this and eat it at all times, including with meals and as snacks, with the crunchy bits served up separately. 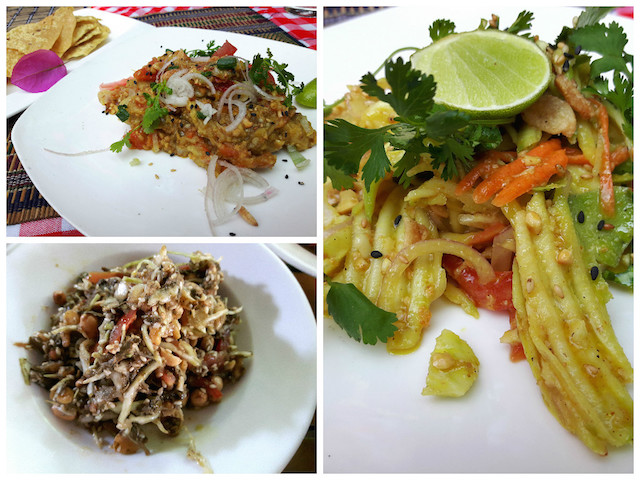 The other must-trys are the pennywort salad (Myin Kwa Yuet Thote), the spicy ginger salad (Gyin Thote) and the Tohu Thote, which has the chickpea tohu in salad form.

This area is where the culinary influences of neighbouring countries are most strongly felt.

There are a variety of vegetable curries available, including usual suspects like basic green and red curries Thai-style, Indonesian masamman curry and the more unusual ones like tamarind leaf curry. 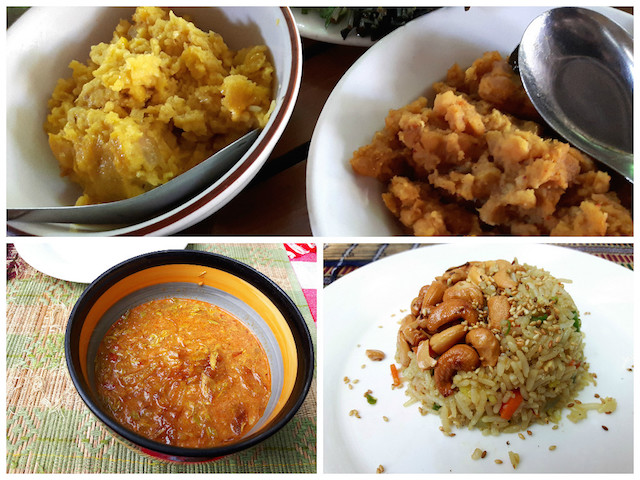 While these are typically served with white rice, there is also the choice of vegetable fried rice with tofu or tossed noodles.

Typical street food in Myanmar is fried and spicy, very Indian in nature: from masala dosa to samosa and bhajiya, these are to be found everywhere, and are considered Burmese. 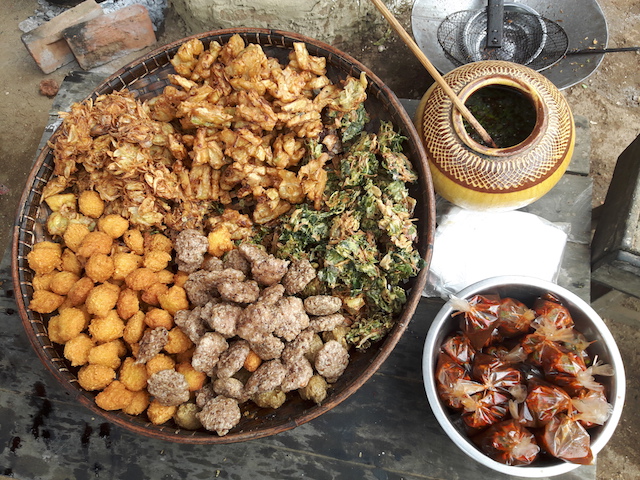 There are also street vendors who specialise in a particular form of dessert – definitely try the deep fried dough sweet (paleada / palata – a corruption of paratha), sprinkled with sugar, or topped with banana slices, the banana cake (napyo bao) and sticky rice ball with coconut (kauk nyinhtuh).

In general though, Burmese sweets are likely to feel too bland to Indian palates, used to the stinging sweetness of laddu and jalebi.

For those looking for a more wholesome al fresco meal, there is the Vegetable Hotpot (Myae Oh Myi Shae), available almost through the day, especially in Yangon.

Street food in the country is almost always hot and fresh, and therefore safe; follow your nose to the ones with the most locals crowding the plastic tables.

***
This story was published in Conde Nast Traveller as A Vegetarian’s Guide to Myanmar – read it online for suggestions on where to eat in each major Burmese city.

2 thoughts on “Vegging it out in Myanmar”