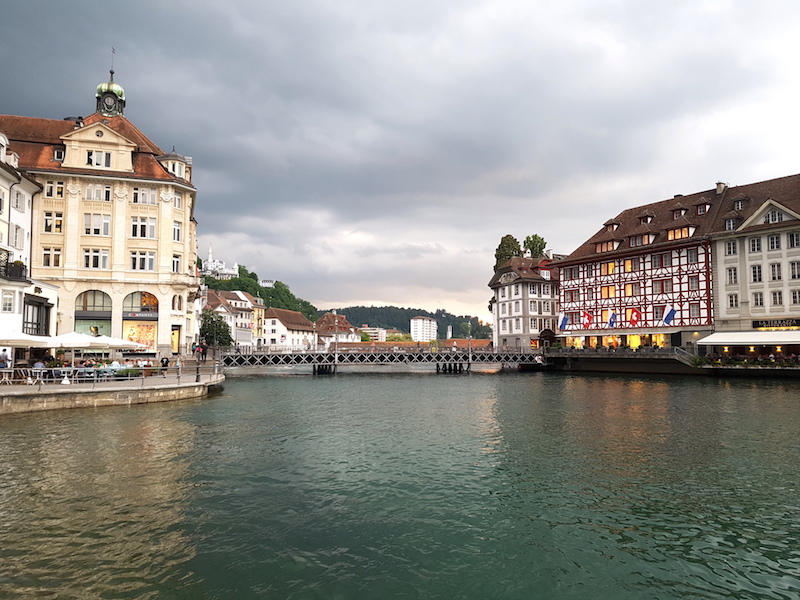 It is still bright and sunny when I head out for an early dinner at seven in the evening. My handy phone map shows the restaurant is just around the corner from where I am staying in Lucerne. So I stroll out of the doors of my charming ‘Romantik’ hotel – as many of the country’s old, boutique properties are known – with just enough time to get there. Big mistake.

The sight of Kapellbrücke (Chapel Bridge) bathed in the warm glow of the Lucerne evening is spellbinding, stopping me in my tracks. It is certainly not the first time I am seeing this picturesque covered wooden bridge – Europe’s oldest, built in 1365 – across the River Reuss. With the octagonal Wasserturm (Water Tower) seeming to prop it up towards one end, the Kapellbrücke is indeed one of Lucerne’s landmarks, quietly connecting the new and old parts of town. 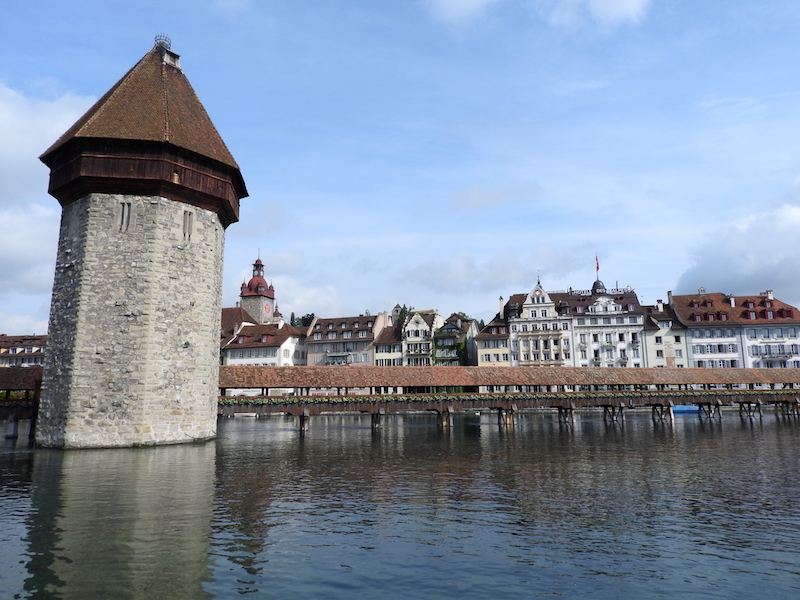 But as I said, this time is special: the mellow spring sunshine makes the wild flowers everywhere seem cheerier, the swans gliding by on the river more content, the clang of church bells from somewhere far away full of hope, and above all, the tourists (like me) fall in love with Lucerne just a bit more.

There can be no doubt that in a country filled with blockbuster vistas and experiences, Lucerne is a quiet charmer.

With all those photo stops, I arrive a few minutes late for dinner, but despite being sticklers for punctuality themselves, the Swiss are a friendly and forgiving lot. Sitting by the water at the Des Balances restaurant, housed in a 13th century building in the AltStadt (Old Town), I watch dusk fall slowly upon Lucerne, sweeping its ancient buildings in a stunning palette of oranges and purples.

Even as the town hovers between day and night, it continues to buzz with an incredible energy that is impossible to resist. The liveliest places at this time of the day are the plazas in the Altstadt, each of them throbbing with al fresco cafés and bars located between the older buildings with their brightly painted façades, and the numerous water fountains that once acted as social hubs for the local women.

Not surprisingly, Lucerne (also Luzern) is still referred to as the ‘city of light,’ a rough translation of its old name of Luciaria (dating back to the mid 9th century). Thanks to its location in central Switzerland, right on Lake Lucerne and River Reuss, and its proximity to tourist attractions like Mount Pilatus and Mount Titlis, Lucerne remains a perennial favourite among visitors.

The next morning, I set out for an excursion to the “dragon mountain” of Pilatus, so known for its many local legends of fire-breathing dragons that once roamed these craggy peaks. Being in proud possession of a first-class Swiss Travel Pass, I decide to go for the complete experience, which begins with a cruise from Lucerne to the tiny village of Alpnachstad. 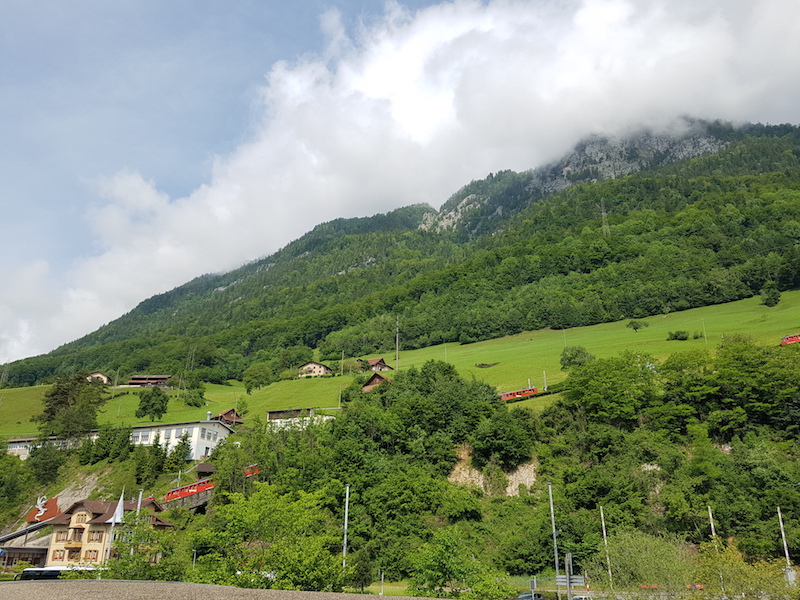 For an hour, we float pass postcard pretty villages and low hills covered in mist, finally pulling up at the place where the jaunt on the world’s steepest cogwheel train begins. The journey here on this train ride up to Mount Pilatus is truly as much fun as the destination, as the gentle, green slopes fall behind, and rugged cliffs with dark tunnels take their place. 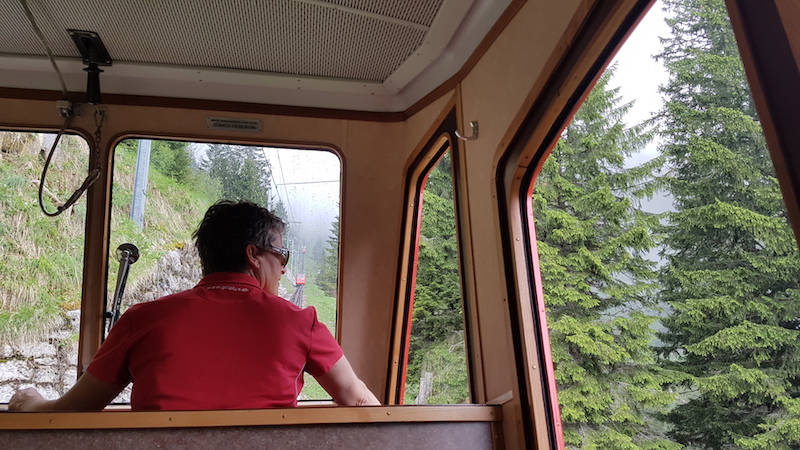 The top of Mount Pilatus – on the northernmost branch of the Alps – is shrouded in a thick layer of cloud when I reach, the sun playing hide and seek for the next couple of hours. In those rare moments when it does manage to make a bid for freedom, I can barely make out the fuzzy outlines of a couple of neighbouring mountains (over 70 alpine peaks are visible on a clear day), and down the valley on one side, with Lake Lucerne glimmering at a distance.

The sound of an alphorn suddenly breaks into the peaceful silence. This music is as primeval and profound as the mountains themselves, and the old man playing it is as much of a tourist attraction as the viewpoints on top.

The return to Lucerne is by a different route and mode; first the aerial cableway to Fräkmüntegg and then the panorama gondola down to the village of Kriens, from where I take the bus for the last leg of the journey back into town. In the winter months, when the cogwheel railway is not functional, this is the only access to Pilatus. 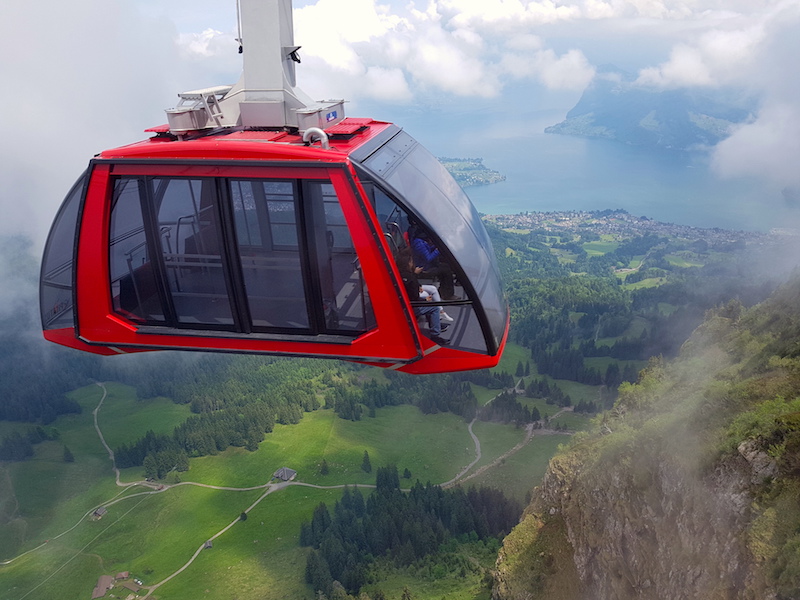 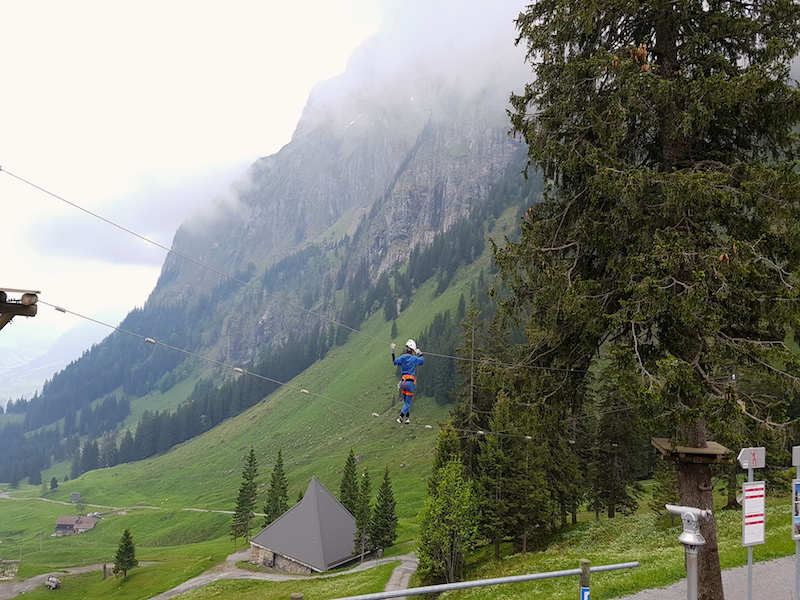 Back in the Lucerne twilight, I pick up a gelato and settle down for a spot of people-watching by the lake. A sudden flash of light in the horizon catches my eye; is it a bolt of lightning, or are the dragons up and about for the evening? In Lucerne, it is impossible to tell.

Fly SWISS from Mumbai into Zurich, from where Lucerne is an hour away by train. Buy the Swiss Travel Pass that allows unlimited access on trains and buses, as well as free entry to museums.

The Wilden Mann is a charming and friendly midtown hotel, located in a 500 year old building.