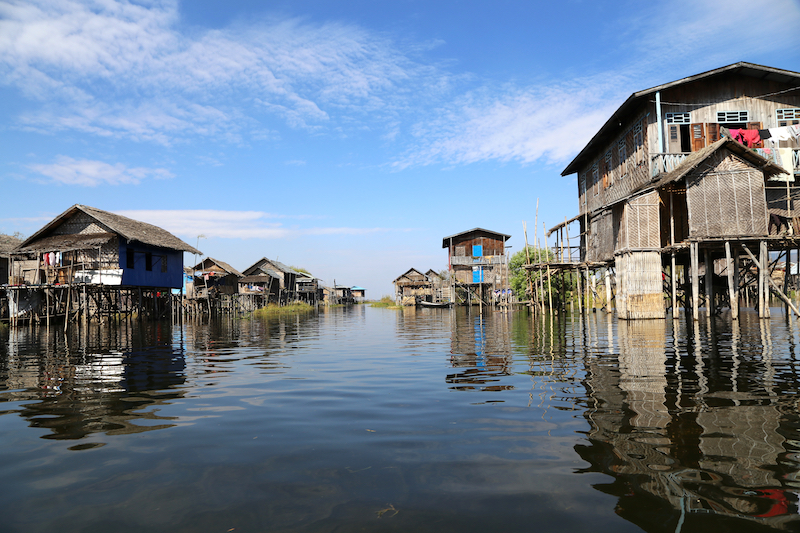 It is my first experience with a traffic jam in the middle of a lake.

It is late in the afternoon, and life on Inle lake is almost at a standstill. The husband and I are nodding off on the boat, drowsy after a heavy lunch of crunchy fermented tealeaf salad and rice with green tamarind leaf curry.

All of a sudden, there is a buzz on the calm waters of the floating Pauk Par village, as dozens of boats appear out of nowhere, and the air is filled with the excited chatter of children. A primary school – tethered to the water by strong bamboo poles, like the other buildings here – has just got over for the day, and mothers have arrived to fetch their children. 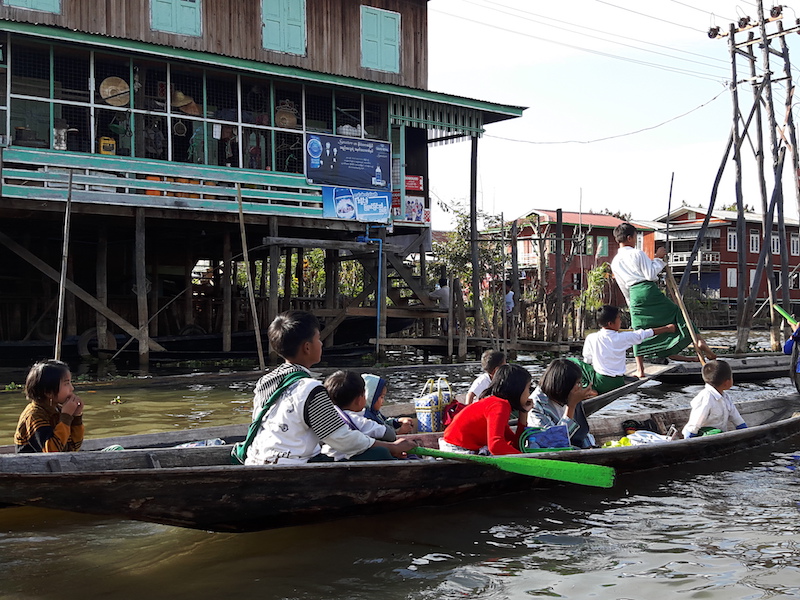 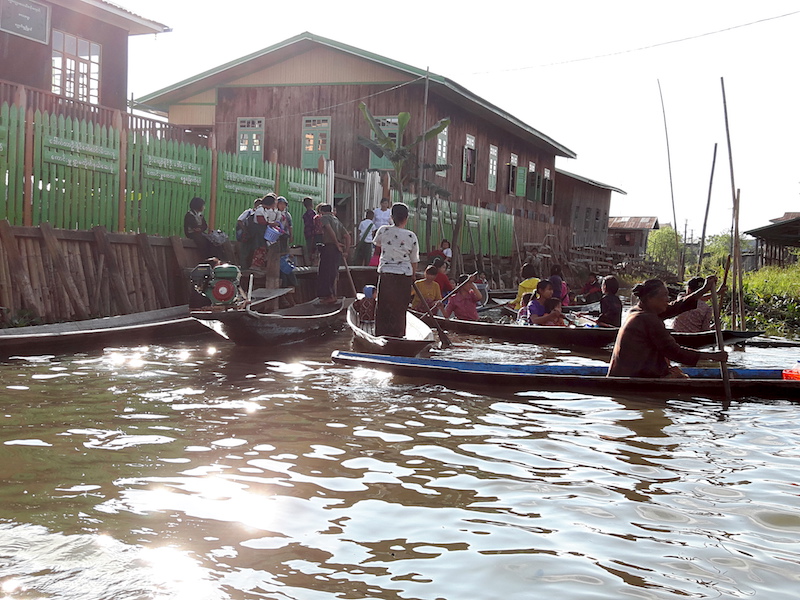 Except, in place of school buses and rickshaws, they are all in narrow boats and canoes. And as on any typical school day, the kids cannot wait to rush home to start playing with their friends. So, there are a dozen boats crisscrossing this tight stretch of lake. The harried mothers first identify their own children from the boisterous crowd and then several others in a complex system of “boat pooling,” before herding them all into their boats.

For a few minutes, it is a scene of utter chaos on the makeshift pier by the school, a scene unlike anything I have ever seen.

But then, this cruise on Inle Lake itself is unlike anything I have ever seen – with fishermen who paddle their boats with their legs, workshops where women weave rainbow coloured shawls with lotus fibres, houses on stilts lining the banks, and villages with schools, shops and gardens that float.

Inle Lake, close to the town of Nyaung Shwe in the Shan region of eastern Myanmar, is part of the UNESCO’s world network of biosphere reserves, and one of the tourism highlights of the country. And the only way to explore all the attractions of this lake is through a daylong cruise on an open boat.

I am usually wary of such organised tours, especially if they begin at seven in the morning. But my guide Aye is a bundle of enthusiasm and strikes the right note when she meets us at the hotel by saying – you can decide what to see and what to skip.

As we glide into the lake, we are greeted by its most famous sons, the Intha fishermen. They perform an impressive balancing act, standing on their narrow boats on one leg, while rowing with the other. This leaves both hands free to fish with their unique conical nets. Many of them now make a living posing for photographs. And why not, given that their movements are nothing less than a slow and graceful ballet on the water.

Inthein is the first stop on this tour, a forest of crumbling pagodas reminiscent of the temple circuit of Siem Reap from several decades ago, untamed and untouristy. The boatman turns off the main lake into narrow creeks to reach this settlement, where Aye clambers up briskly through a cluster of broken stupas known as Nyaung Ohak. 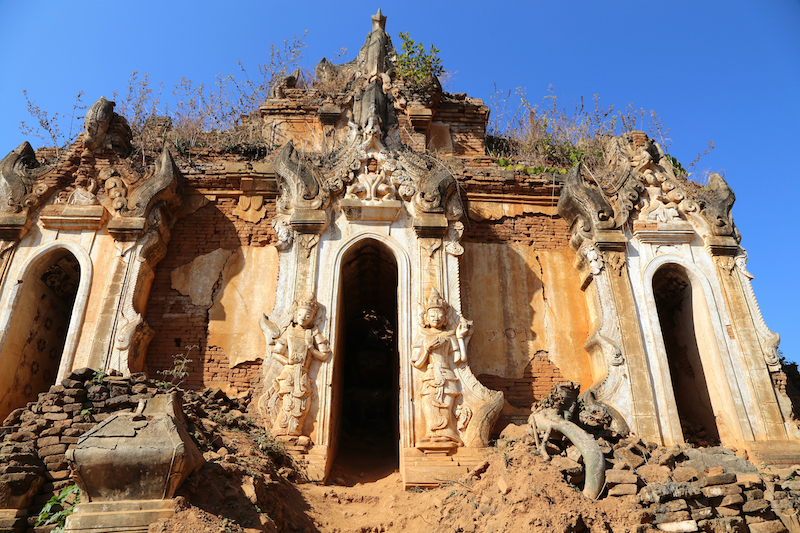 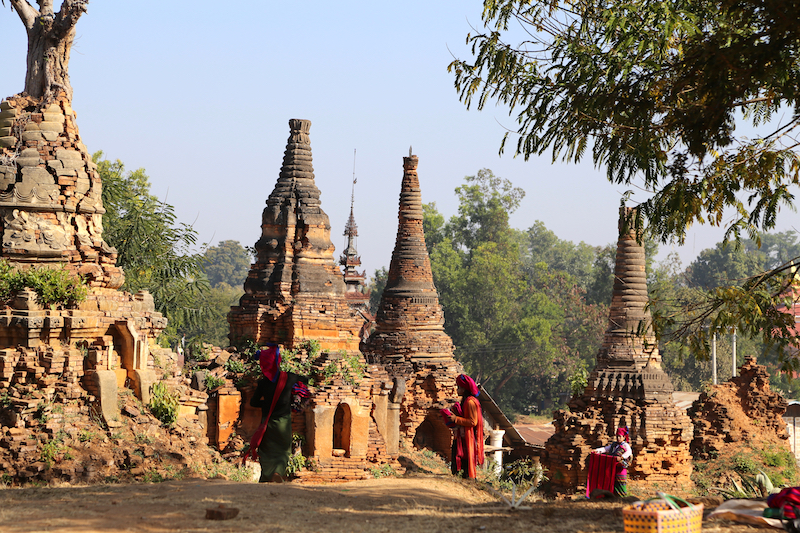 The prize awaiting us at the end of much huffing and puffing, at the top of the hill, is the Shwe Inn Thein Paya, a complex of 1054 pagodas from the 17th and 18th centuries. Some of them have been renovated into gleaming gilded glory, while others left to crumble into a state of decay; the contrast has us awed and disconcerted by turns. 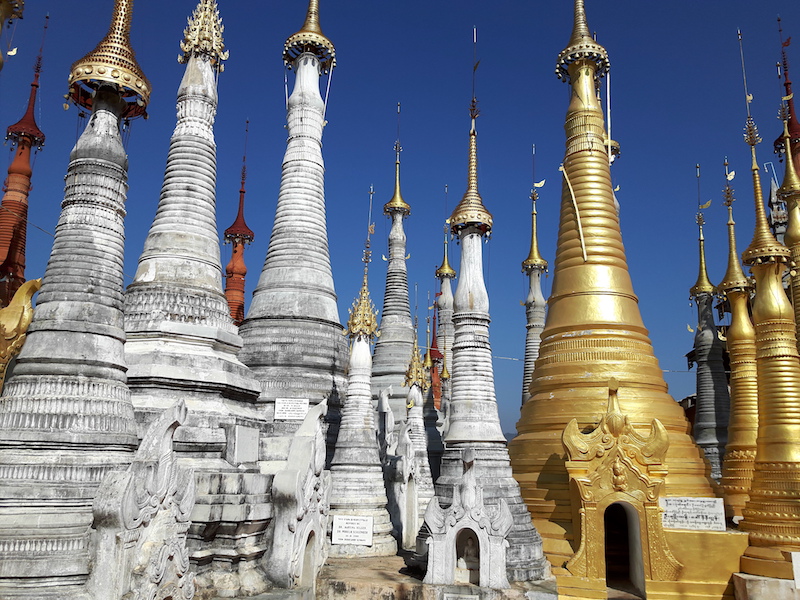 We float on and on – is that a post office I see? – till we fetch up at the village of Inn Paw Khone, to the lotus weaving centre. My antennae go up immediately as I resolve not to be tricked or coerced into buying anything here. As it turns out, I cannot afford anything anyway, which is a pity, since I would have dearly loved to pick up a souvenir. 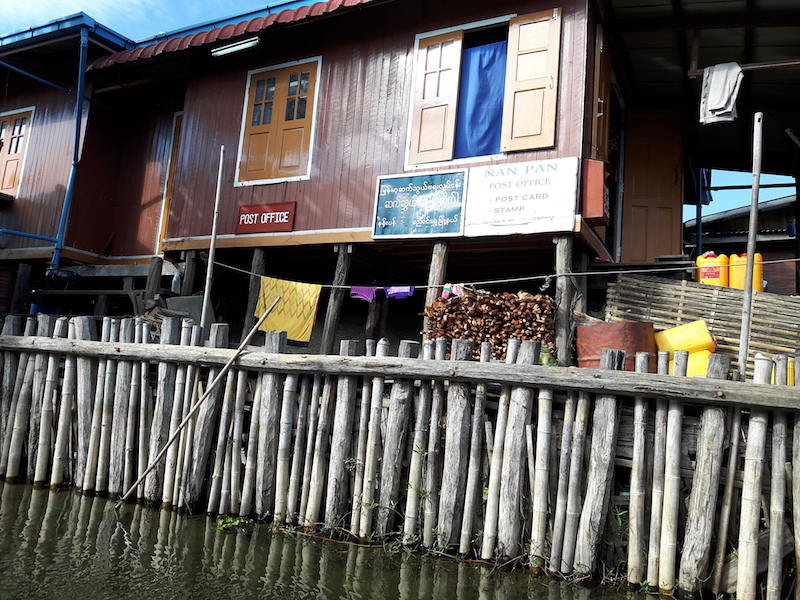 I can hear the clackety clack of the looms as I step out of the boat towards the dilapidated buildings. Inside the spacious rooms, with sunlight pouring in through the bamboo slats on the windows, women of all ages are at work, their eyes sharply focussed on the rhythmic movement of the looms. A few young women are sitting to a side, patiently demonstrating the art of removing the fine thread of the lotus plant, before weaving them into intricate patterns of fabric. 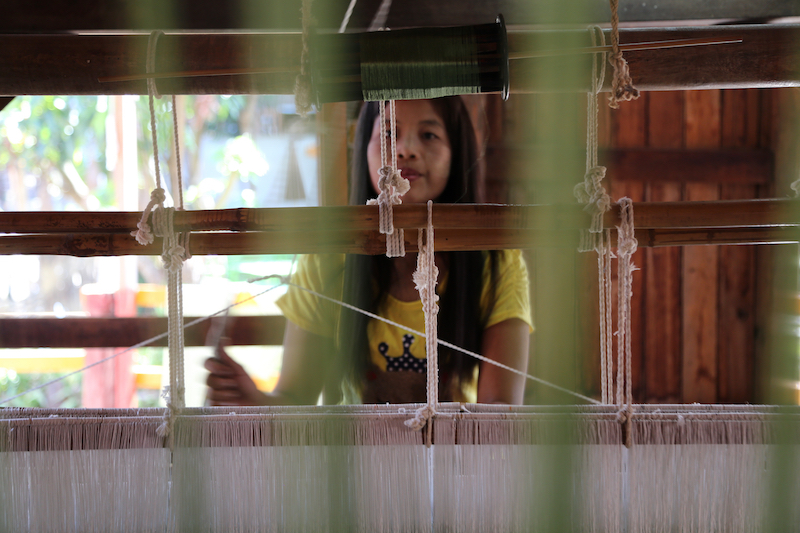 Lotus fibre is especially unique to Myanmar and this part of the country, since the shallow waters of Inle Lake make for ideal growing conditions for the lotus plant. These fibres are finer and softer than silk, making it much more expensive. The gift shop at the exit has a stunning collection of scarves, shawls, dresses and the Burmese longyis – but for once, there is no hard sell.

On our way back to Nyaung Shwe, we see the famous floating gardens of Inle Lake, where locals grow fruit and vegetables for everyday use and for the market which changes location according to the day. Tomatoes, eggplant, chillis and cheery flowers sway in the mild afternoon breeze, but the rice fields are hidden from sight. These patches of gardens or fields are actually anchored by bamboo poles, and are resistant to flooding since they rise and fall with changes in water levels.

Dusk falls slowly upon Inle Lake, a signal to the Intha fishermen home to go home. We cross a boatful of young Myanmar girls with cooling thanaka paste on their cheeks, ferrying huge baskets of vegetables. Mingalaba! they giggle the traditional Burmese greeting, as we wave at them.

If there is a time to go to Myanmar, it is now. 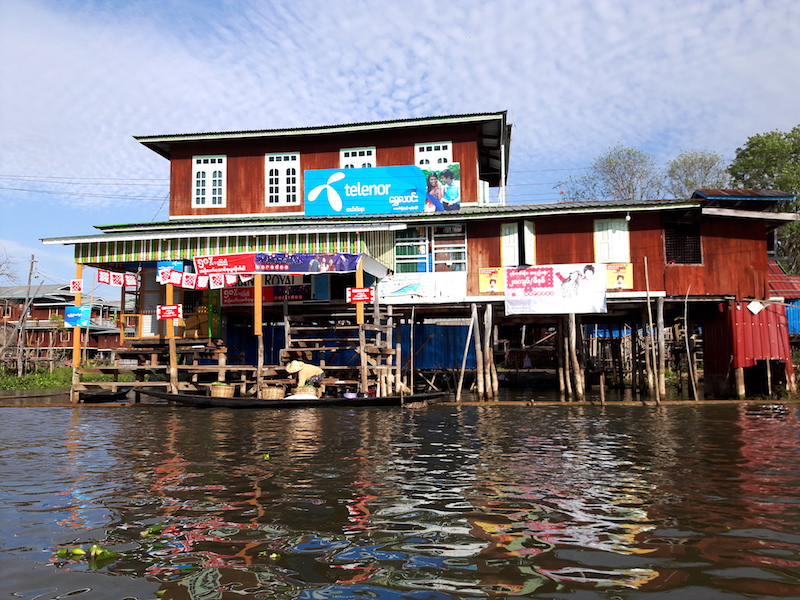 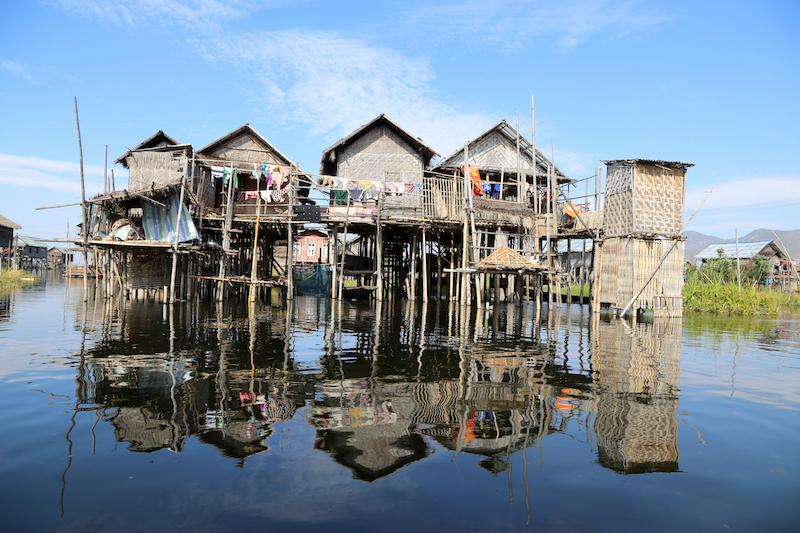