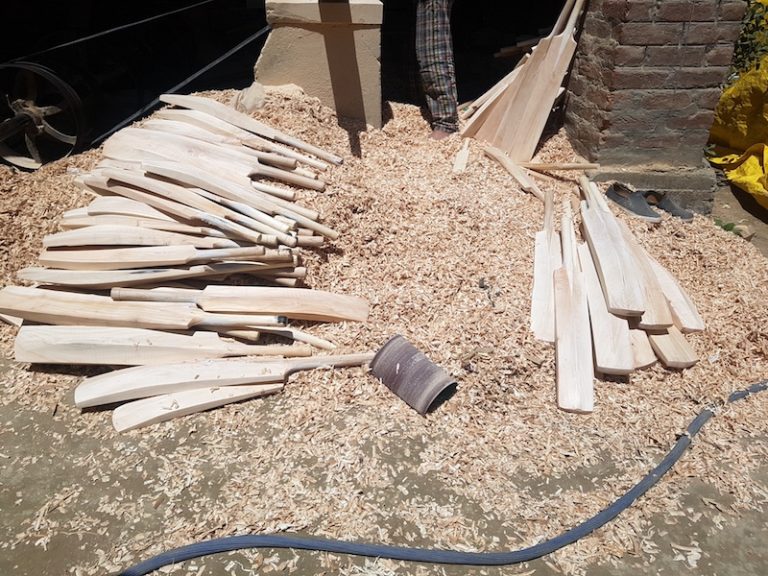 The young employee of my Pahalgam hotel shrugged his shoulders dramatically when I asked him a probing question about that part of Kashmir. “I’m from Jammu, madam, I don’t know much about this place,” he replied, the indifference writ large on his face. I’m only here to make a living, he seemed to imply.

Being new to Kashmir, I was a bit taken aback at the lack of connect between two places in the same state, barely over 250 km apart. Yet, the very next minute I was in for a surprise. “Where are you from, madam?”, he asked. And when I replied, Bangalore, his entire face broke into a smile, in the manner of the sun emerging from behind dark clouds.

RCB ka kal match hua tha na, aapne dekha? He enquired about the IPL series that was then ongoing, and my own involvement in my local cricket team. It was difficult to get a word in edgeways then on. And just like that, a young dreamer from Jammu had found a point of common interest with me from all the way across country, even if only to inquire about my favourite players and offer opinions about his.

In Kashmir, as in several other parts of India, cricket unites people as much as it divides them. Cricketing records and legends are discussed with great enthusiasm, and cricket played everywhere on crowded streets and along gurgling steams. But more significantly, cricket bats – the ones that eager children all over India use in their daily games – are made here.

The village of Sangam falls right in the middle of the highway between Srinagar and Pahalgam, two of the most popular tourist spots in Kashmir. Depending on the season, the road leading out of Srinagar is lined with flowering trees and plants – from precious saffron to juicy apricot – with snowclad mountains in the background.

On our way to Pahalgam, we crossed the village of Pampore, the centre for saffron harvesting and marketing; although the fields were not in bloom, every shop in town was selling saffron and spices. We soon arrived at Sangam, again where every building had the same kind of board up front – advertising the best cricket bats. Piles of raw wood, cut into the long and narrow shape we all are familiar with, sat right next to the main road, patiently drying under the mellow Kashmir sun. 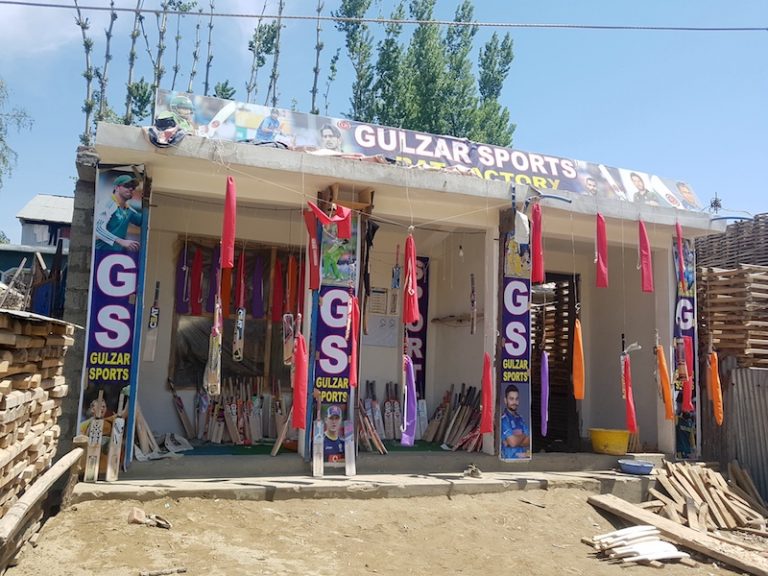 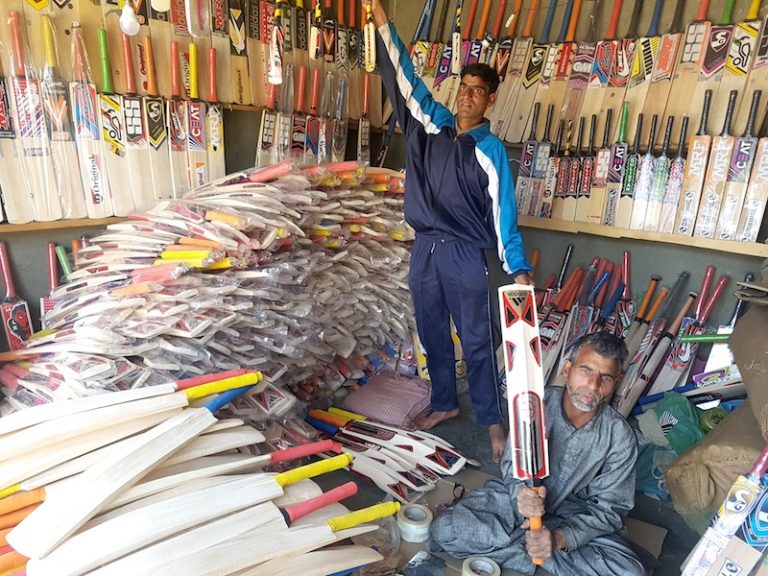 It turned out that in Sangam village, there are practically no houses without cricket bat factories attached to them. And although estimates vary, there are anywhere over 300 families involved in this craft. And indeed, it is a craft, as we found out when we stopped to watch at one of the more nondescript workshops.

We covered our faces partially against the cloud of sawdust that arose as we stepped into the courtyard where a couple of craftsmen were busy at the mechanical saw. And in the inner room, we found – both the children and the young at heart in our small group – a delightful treasure trove of cricket bats. 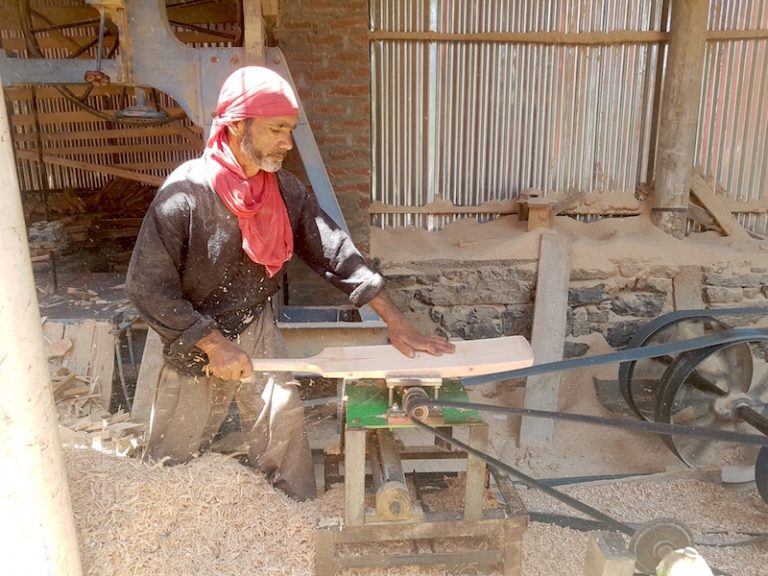 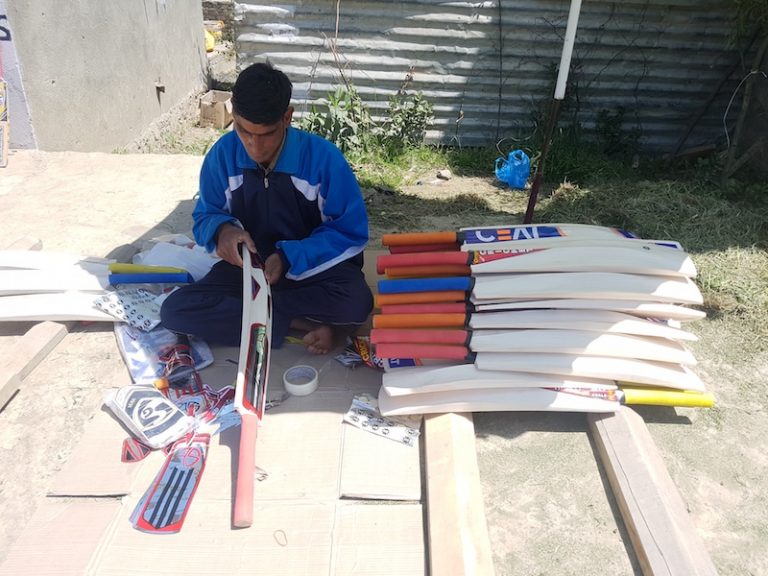 The weeping willow, unique to Kashmir (and England), perfectly lends itself to be shaped into cricket bats. Unsurprisingly, this is where it all started – not in the recent past, but at a time when India and Pakistan were still a single entity. The need for cricket bats arose in India when the British brought with them the sport, but not enough equipment to keep it going.

And since it was not possible to import cricket bats from the Blighty all the time, this part of the country stepped up as an excellent local alternative. The workshop, now known as Dar Sports, is believed to have been the pioneer. And all the workers and workshops in town owe their existence to that trailblazer, who moved to Pakistan during the Partition.

The factory we visited belonged to Abdul Rashid Dar – very possibly a distant descendant of the original Dar himself – a veteran of over 25 years in this business. With only five workers in his factory, he managed to turn out over ten bats every day. There was an infectious animation in his voice when he talked about the process of making them.

The willow is first checked for age, and logs with more circles preferred, since these are older in age and proven to have greater strength. The chosen wood is then cut and dried out in the open for up to six months: the sight that greeted us right as we drove through the town. And then the wood is carved into its final shape, the handle attached with industrial grade Fevicol, after which the bat is polished. The final step involves coating the handle with a rubber grip and a final round of oiling.

As with other craft industries in India, this too has been seeing its share of crises over the last few years, especially shortage of willow wood and rising prices of raw materials unmatched by an increase in the finished product. Nevertheless, locals in Sangam take great pride in their work, sending out an estimated 500,000 cricket bats into the hands of hopefuls within and outside the country every year.

We left Sangam clutching a handful of bats ourselves, including two palm-sized ones as souvenirs.

One thought on “Where our cricket bats come from”