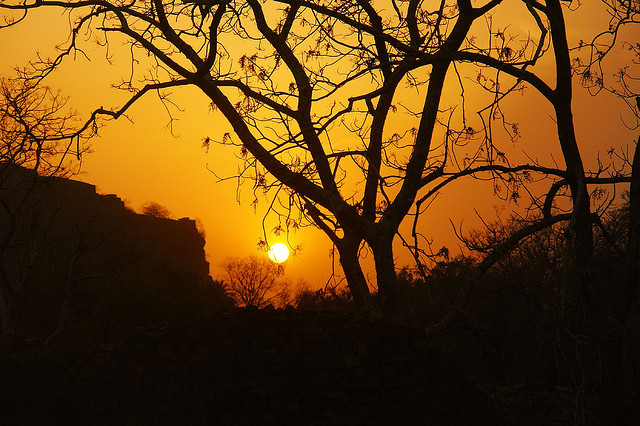 It was intended to be a short holiday for our anniversary. And I fell in love there. Our first safari ride into the Ranthambhore National Park, just before sunset, we sat and waited by the almost dry lake on one end of zone 3 of the park. Watched the herd of deer all looking in the same direction, observed their tense attitudes and our driver’s excitement… and waited patiently in complete silence. The only sounds were the alarm calls given out by the deer, their survival instincts kicking in though no tigers were visible to any of us at that time. 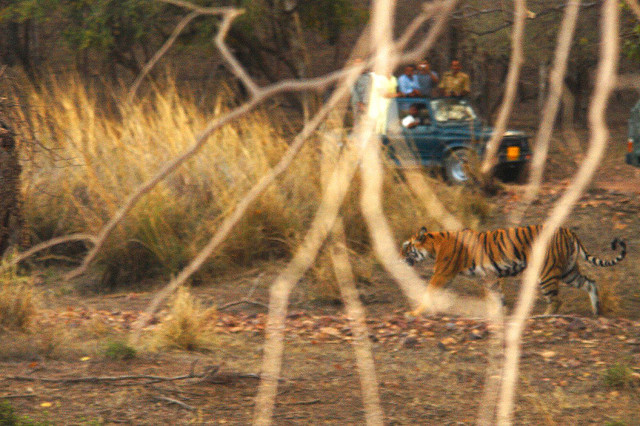 She left her cubs at a safe distance, and then walked slowly towards the waiting vehicles. She crossed the path, glorious in her orange black stripes shining like burnished gold in the fading light of the evening, the most exhilarating catwalk ever and ambled over to the water. She drank some water and then lay there for a few minutes, thirst quenched. Cursing myself for not having invested in the new lens, I borrowed a pair of binoculars from a neighbor and zoomed into her face. And just as I got her into focus, she raised her head and looked straight at me, lazing licking the side of her face. It was then, that precise moment that I fell in love with her.

The ‘lady of the lake’ then walked through the tall dry grass and crossed the path in front of our vehicles, seemingly oblivious to her admirers and went back to where she had emerged from just a few minutes ago. Shooting over. Pack up.

The Ranthambhore National Park is protected territory spread over 280 sq km of varied fascinating terrain. Ranthambhore being dry deciduous forest, most trees had shed their leaves for the summer and the entire region was a riot of deep earthy tones, semi-parched brown and yellow, sudden fresh greens in between and the bright red ‘flame of the forest’ lighting up against the deep blue sky. Although Ranthambhore is considered one of the best places to spot the tiger, we were told before setting off that tiger sightings are a matter of chance and also more importantly, that there is much more to the Ranthambhore park than the tiger and therefore, it pays to keep the eyes open just to the ecosystem. 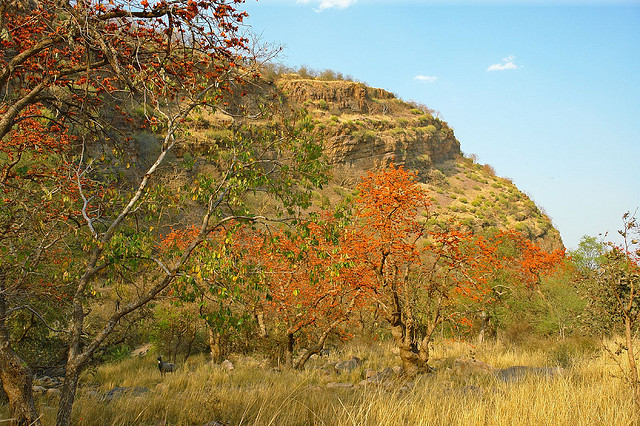 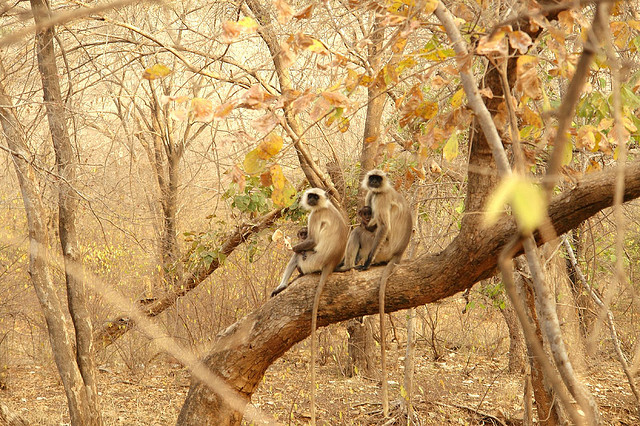 This is sound advice to remember – the park abounds with all sorts of life – from spotted deer, cinkara, sambar and langurs to leopards and tigers. I am told that the park is also a bird-watcher’s delight – the website of Ranthambhore Bagh (a great source of information about the area) where we stayed says – It is home to over 40 species of mammals, 320 species of birds, over 35 species of reptiles and over 300 species of plants. I know several people who came with us on the safaris completely disinterested in anything the guide or driver may have to show them – but where is the tiger? Which also brings me to the other important lesson learnt – while keeping eyes and ears open for the tiger is a great idea, it is best to keep the mouth shut and just listen. That helps you soak in the surroundings and enjoy the ride, appreciate the diversity inside the park and appreciate rare tiger sightings as bonus.

A note on conservation

Ranthambhore became part of ‘Project Tiger’ in 1973 when the gravity of the issue of declining numbers of tigers was realized and the government began its serious conservation plans. There have been crises of varying dimensions since then, the latest as recent as a couple of years ago (in nearby Sariska, and threatening to affect Ranthambhore too). Although poaching has not been reported much in the last few years within the protected area of the national park, there are vast areas of forest lying on either side, where the animals move around freely, and where there is no “protection” against poachers (who ironically cannot survive in the wild for a day on their wits alone, without the guns and weapons).

Ranthambhore attracts committed naturalists and tiger-lovers and after tiger-sighting, the next best thing for me was sitting in the long hot evenings, listening to their stories. About Fateh Singh Rathore and his love for the animals and later the park itself, about tigers and leopards coming out into the open and walking on the roads at night, about the villages which were once situated inside the area of the reserve and the villagers’ (not always expected or appreciated) encounters with wildlife.

I had the pleasure of riding on vehicles where the driver stopped suddenly (two different times, different people) on spotting an offending bit of plastic on the path. And guides who pleaded with tourists to maintain silence and not throw away their plastic into the open. It is so easy to do your bit to make the lives of the animals more peaceful – if not aid in actual conservation (who knows how much damage plastic does) – avoid loud clothes, loud noises. The tiger is just a beautiful animal, a loner with great elegance and dignity. It is no wonder I fell in love at first sight.

A holiday in Ranthambhore is incomplete without a visit to the fort from which the park derives its name. The fort, built sometime in the 10th century, stands on top of a hill, huge and forbidding and right in the heart of the protected park area. Ranthambhore is the second largest fort in Rajasthan, the first being Chittorgarh. As with all self-respecting forts, the climb up is steep and tiring, but the breath-taking views from the top more than make up for it. Apart from the tourists, the locals climb the fort with great ease quite regularly to visit the small Ganesh temple inside. 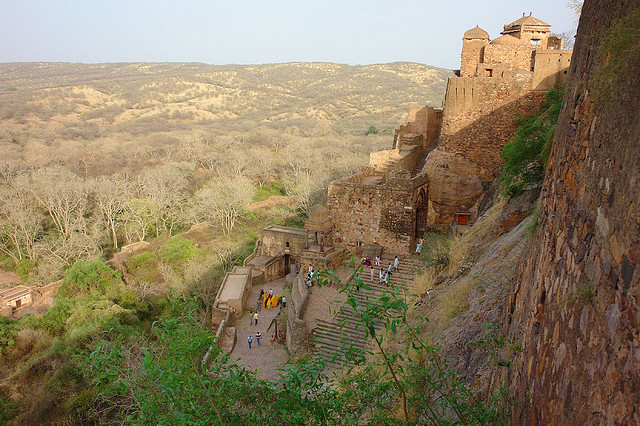 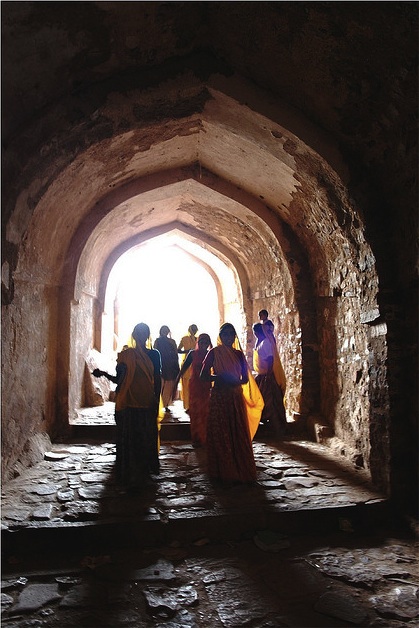 The guide we took with us rattled off names with practiced indifference – Hammir, Allaudin Khilji, Rann hill, Dulha Mahal… I listened only with half a ear, mostly engrossed in the distant views of the park and the colorful locals who ran carelessly up and down the steps as we huffed and puffed our way up. We passed through the three main gates and past the small Ganesh idol fashioned roughly with the hand where the old and the sick who cannot climb all the way up to the temple offer prayers.

There are several “sight-seeing” points inside the fort including the Badal Mahal – open to the sky, as the name suggests, Dulha Mahal – a small terrace from which the breadth of the park is visible – our guide points out deer grazing in the grass by the padam talao in the distance, and even baby crocs in the water, lying still as rocks, the Ganesh temple where 500,000 pilgrims are said to congregate during the Ganesh festival every year, the chhatri mahal – the 32 pillared palace, the perfect place to stand late in the evening and watch the sun set in the distance.

The closest railway station to Ranthambhore is Sawai Madhopur, well connected from both Bombay and Delhi. All resorts and hotels are located on the road leading to the national park. There is accommodation to suit all needs and all budgets from small cozy tents to large luxury hotels.

At Ranthambhore, there are two safaris in a day – one that begins just after sunrise and the other in the early evening – depending on the season – each safari lasts for roughly three hours and each one can be an interesting experience. The forest takes on a different character each time you go through it, depending on the time of the day and even perhaps its mood. Part of the forest’s nature is shaped by the fact that it is the intersection point of two old and varied mountain ranges – the Aravalis and the Vindhyas, each with a distinct character.

Entry into the park is severely regulated and only 20 jeeps and 20 Canters, all authorized by the government are allowed into the park at any safari. The Canter rides are far more comfortable than I had expected – and feared – but you need to make early bookings, easiest done through the hotel you stay with. The core area (where vehicle movement is allowed) is divided into five zones and each vehicle is allotted a different zone. Each of these zones is different in terrain and topography, and we were lucky to get different zones each time we went in.

The best time to visit Ranthambhore, if it is cool comfort you seek, is between November and February. However, the hot summer months are best for wildlife viewing but only the really serious brave the heat and go during that time. The park is shut from July till October for the rains.