*When I first catch sight of them, the apsaras are resting on the cold stones of Angkor Wat. One is flexing her foot, mimicking the action of the stone apsara dancing just behind her on the wall. The others are talking to each other in muted tones, bored expressions on their faces. The American tourist, khaki shorts and all, walks up to them and points with his camera, and they spring into action instantly. As a group, they strike well-rehearsed poses, peacocks flanking the line-up, the boy with the lion’s head in between, a dancing apsara on each side of the utterly discomfited tourist, as his friend clicks. As they pose for the camera, for a dollar, I notice the boredom doesn’t shift from their faces. Shot over, they get back to rest mode without so much as a smile at their temporary benefactor* 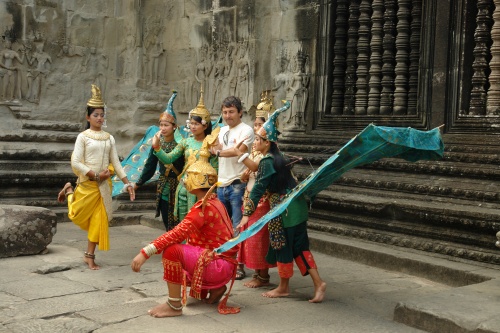 There are over a thousand apsara statues in the Angkor temple complex, it is believed. And most of them have survived, just as the temples and the country itself have. 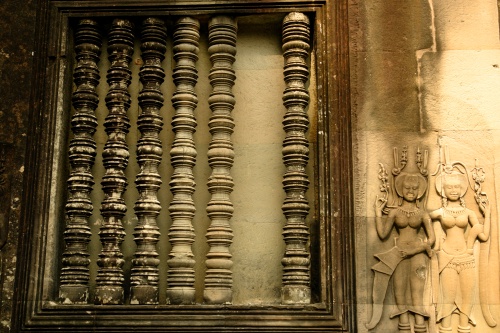 Everywhere in Cambodia, the apsara theme – from the names of schools and restaurants to name of the temple preservation committee.

I was reading about the history of the apsara dance in Cambodia and learned that both male and female dancers were allocated to specific temples, for religious rituals and enjoyed high status in society. There is a lot of similarity to be seen with the devadasi tradition in South India – from this article:

King Jayavarman VII put more than 3,200 dancers in temples, according to inscriptions around the end of the 12th century There also were dancers for entertainment in the households of kings and dignitaries. And dancers constituted the king’s harem.

The most beautiful girls would be brought as young as six years old to the palace by their parents who were compensated according to the beauty of their child. From the time of King Ang Duong in the mid-1850s until the 1920s, dancers were cloistered in the palace – King Norodom, who had around 500 dancers at the start of his reign in the 1860s, allowed them one day per year to visit their families under escort.

What exists in performances in temples and restaurants and pubs today started off several hundreds of years ago as the Royal Cambodian Ballet. Apsara dancers were once part of Cambodia’s cultural elite, training and performing at the royal palaces. The tradition was destroyed along with almost everything else during the Khmer Rouge regime. Today, there is an effort to revive this dance form – in its classical format – since in its “popular” avtaar, apsara performances are everywhere in Siem Reap (much like the whirling dervishes of Turkey who whirl exclusively for tourists enjoying their drinks and dinner).

Several schools including the Apsara Arts Association trains dancers from a young age, as part of the long and painful process of rebuilding Cambodia’s shattered economy and culture.

Wanting to watch a performance, I book a table for dinner (“with live apsara dance”) in a restaurant on Siem Reap’s bustling Pub Street. We make our way up rickety wooden steps towards the dinner / performance area; the ground floor is a pub with pool tables. Groups of Westerners are sitting down to dinner, there is laughter and loud conversation.

And then suddenly the music begins to play, soft and haunting, and there is a hush in the room. The group of dancers, dressed in white, their costume said to be derived from those of the apsara statues in the temples walk in and begin swaying to the music. 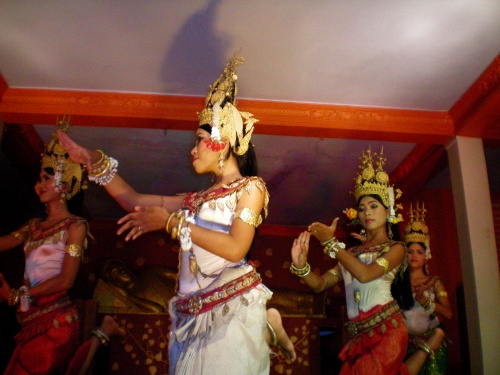 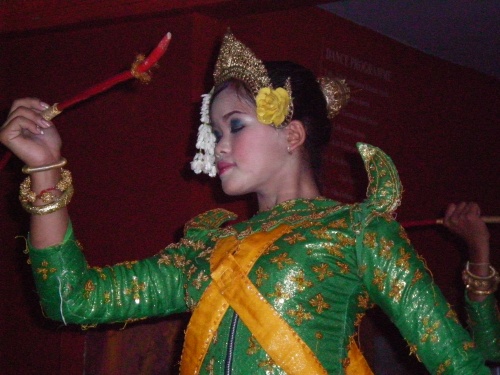 The dancers are very young, perhaps in their late teens, dainty hands with long nails, big eyes and smooth skins. And most of them have a bored look on their faces; they go through the paces in a mechanical manner reminiscent of the costumed apsaras at the temples. For all that, the dance is graceful and sensuous, the movement of their hands and feet mimicking those of the statues immortalized in stone. 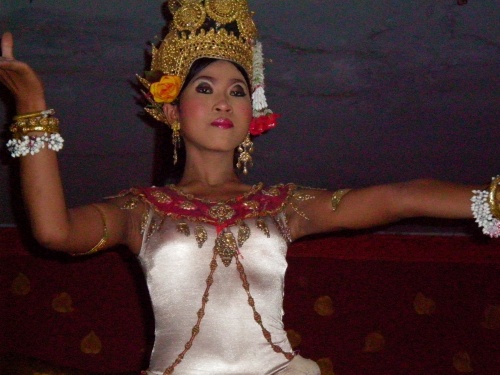 Each movement of the dance is said to have a symbolic meaning; all that is lost on the casual viewer like me. Perhaps due to its setting, the entire performance is folksy, the initial apsara dance followed by what is described as the dance from the villages.

I remember reading that the entire Ramayana of Valmiki has been set to music and is performed at the more traditional venues; now that would be something to watch.

4 thoughts on “The apsaras of Angkor”