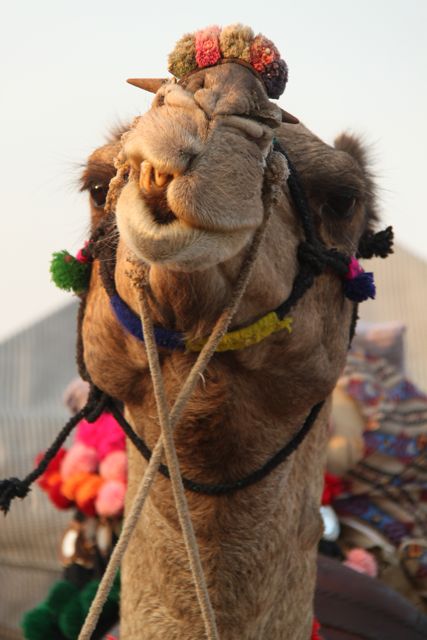 The scene at Pushkar is everything I expect from a mela. Not surprising, considering that like many of my generation, urban born and bred, my idea of a mela has been shaped by innumerable Hindi films where young hapless children are forever being separated from their mothers and siblings. Sure enough, the loudspeakers blare out names of such children, requesting their parents to rush to the main office to reclaim them.

The loudspeakers announce other things too. “Sabse Saandar So!”—the most splendid show, claims the man advertising the circus. There is Bhojpuri and Rajasthani music, the women in the videos gyrating in an impossible manner. Someone else is calling out to people to see—and shell out money for—the Amazing Computer that tells your fortune; the digital version of nadijosiyam (astrology) which has come all the way from Thanjavur in south India. Above all this din, children manage to make themselves heard as they clamour for rides on the Ferris Wheel. My favourite, though, is the one that promises, in a not particularly devout manner, “Barah mahine me barah tarike se tujhse bhakti jataunga re” (In 12 months I’ll find 12 ways to show you my devotion).

For most of the year, it is a sleepy town that backpackers have just begun to discover. Then in November, the mela arrives, turning it into a party zone and, for an all-vegetarian temple town, Pushkar parties hard. All the action is centred on the large open ground where camel herders from all over the state gather to trade (over 12,000 camels this year, says one of them).

The fair, which usually takes place in late October—early November, ends on the day of Kartik Poornima, when it is believed that all the millions of gods and goddesses descend to bathe in the sacred lake in the centre of the town. What began as a religious festival grew into a camel trading fair and is now one of the largest attractions Rajasthan has to offer eager visitors, locals and foreigners alike. Now, apart from the trading of camels, there are plenty of events on the periphery: a hot air balloon show twice a day, competitions like turban-tying (for foreigners) and longest moustache (for locals) and of course, the noisy mela itself just outside the trading ground. In 1940, I read somewhere, the most expensive camel went for Rs. 77. In 2011, the price went all the way up to Rs. 5 lakh for a good camel. And far, far more expensive are the horses; there are whispers of amounts like `2 crore around a gorgeous all-white one standing tall and proud, just like his owner. As the sun begins to set, the hot air balloons floating above the grounds begin their slow descent and cooking fires spring up in front of the tents where the traders stay for the duration of the fair. The women pull the ghunghat of their saris closer against the evening chill as they flatten out rough chapatis on the braziers, while the men in bright yellow and orange turbans begin to light up their chillum, discussing the day’s trade.

Normally — other than these eight days — life in Pushkar revolves around the lake (known as the sarovar), surrounded by 52 ghats. The hour prior to sunrise sees a flurry of activity as pilgrims take a dip in the sarovar, before heading to the 14th century Brahma temple, one of the few that are dedicated to the god of creation in India. In the lanes by the temple and the ghats, well-worn clichés come to life: the old meeting the new, and the sacred the profane.

For instance, amid the stalls selling piping hot kachoris and malpua that melts in the mouth are small cafes with names like Out of the Blue and Honey Dew, the latter serving coffee procured all the way from Colombia. And it is in the lanes that the real Pushkar shows its face; a place where pilgrims and backpackers flock to, each in search of his own personal nirvana.

***
My photostory on Pushkar published in the December issue of Fountain Ink.

A morning at Dhobi Ghat

The temple that time forgot

5 thoughts on “Camels, colour and a million gods”