Madurai has always been a city of commerce, with trade relations extending to the Romans and Greeks. When Greek ambassador Megasthenes visited the city in 302 BC, he wrote about it magnificence. Arab merchants and Sufi saints also made their ay to Madurai to trade with the Pandya kings since 900 AD. Closer home, the local Chettiar community traded extensively with Ceylon (now Sri Lanka), Singapore and Malaysia. Further, silk weavers and merchants from Saurashtra in Gujarat have made Madurai home for several centuries now.

Today, Madurai’s food is a happy union of all these influences, mainly that of Chettinad cuisine, known for its fiery flavours. The Chettinad region, comprising 75 odd towns and villages, is less than two hours drive away from Madurai. 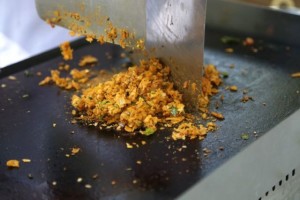 The Chettinad story is seen in the rice-based snacks like paniyaram (savoury snack shallow fried in a special mould) and idiyappam (string hoppers), kuzhambu (spicy stew) varieties and a wide repertoire of meat dishes, from chicken and mutton to crab and rabbit. Kothu parotta – flaky paratha that is spiced and minced on a hot griddle – is the culinary legacy of Sri Lanka. Popular on the streets of Colombo, kothu parotta today is served everywhere in Madurai in various avatars that include vegetables, eggs and meat. 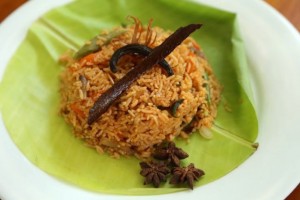 The Madurai version of biryani is spicier than the more famous Hyderabadi and Lucknowi versions, with coconut milk added occasionally. It is believed to have been brought in by the Muslims, as also Madurai’s famous Jigarthanda. Literally a heart cooler, it is a tall glass of sarsaparilla syrup (locally known as Nannari), almond jelly (also called ‘badam pisin’), sugar, milk, cream and ice cream with a garnish of pista or badam.

One of the main properties of Madurai cooking is that masalas are used in abundance and always ground fresh. Red chilli, fresh coconut, garlic, tamarind, fenugreek and curry leaves are the most common condiments. Star anise, kalpasi (a lichen, also known as dagad phool) and Marathi moggu are used primarily in gravies, along with bay leaves, cinnamon, fennel seeds, black pepper and poppy seeds in varying proportions. In a nod to the sweltering heat of the region, salted and sun-dried vegetables and meats (known as vatthal) are also used. 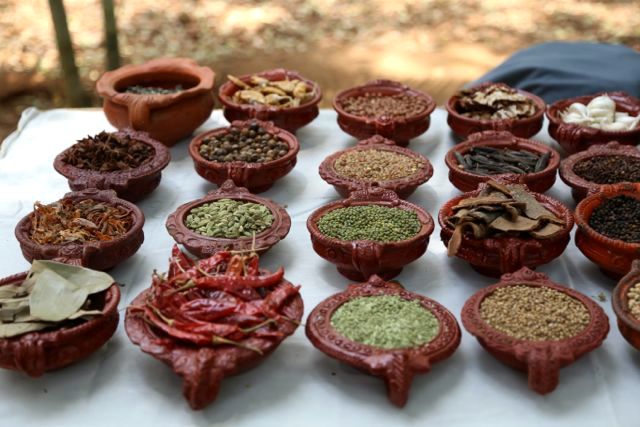 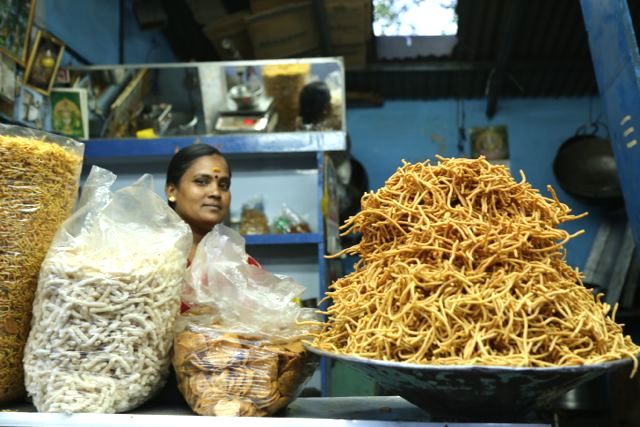 As a temple and trading city, Madurai takes its sobriquet of ‘thoonga nagaram’ (the city which never sleeps) very seriously. Well till midnight, street stalls resound with the clang clang of kothu parotta being chopped up and special Madurai biryani being ladled out by the platefuls for the thronging locals and tourists alike. Irrespective of season, the Jigarthanda shops sell over 1000 glasses of the refreshing drink every single day, going up to 5000 glasses in peak summer. The flower markets are bustling by 3 in the morning, while prayers at the Meenakshi temple begin by 5 am. By then, the city is awake and the food vendors are back in business. 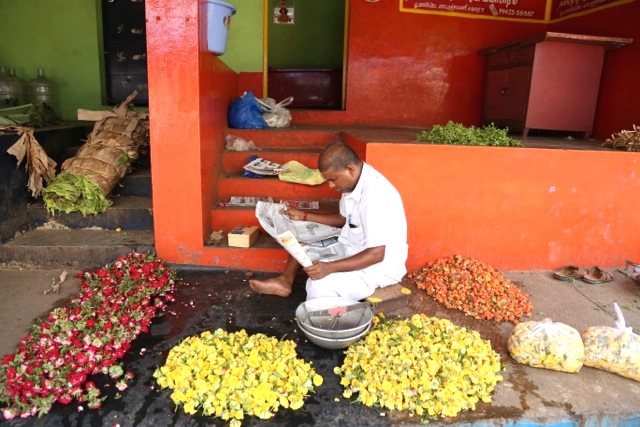 ~ The Meenakshi temple is at the heart of Madurai, with the main streets spreading out as concentric squares around it. Most of the important shopping and eating joints are in the temple area.
~ Madurai is known for its food from the “mess”, local eateries serving home cooked non-vegetarian food. This is believed to have started with the influx of a large number of people from neighbouring towns and villages during festival times at the Meenakshi temple.
~ Rice is present at every meal in Madurai, either as plain white rice, or flavoured rice such as lemon rice, puliyodharai, tomato rice and biryani, or in the form of idli, dosa, paniyaram, appam or idiyappam. The favoured rice, even for biryani, is the local Ponni and not Basmati. 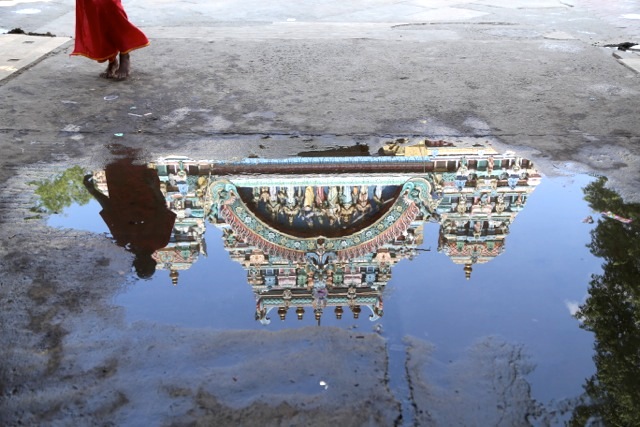 ~ Madurai Idli Shop is a mandatory pit stop for visitors to this city, with idlis that are said to be as soft as Madurai’s famous malligaipoo (jasmine). Definitely try their onion uttapam, topped generously with a dollop of Amul butter or ghee and small shallots. Ignore the sambhar and focus on the four varieties of chutney served on the plantain leaf.
~ Drop in at the no-frills Amma Mess at Thallakulam for a hardcore carnivorous meal; try the chicken dosa, prawn biryani and mutton kola (fried mutton balls).
~ Beat the heat with Bovonto, the local grape-cola or Nannari sherbet, both available at all roadside stalls.
~ At the end of the day, wash it all down with a glass of Jil Jil Jigarthanda at the ‘Famous Jigarthanda’ shop on East Marrat Street. 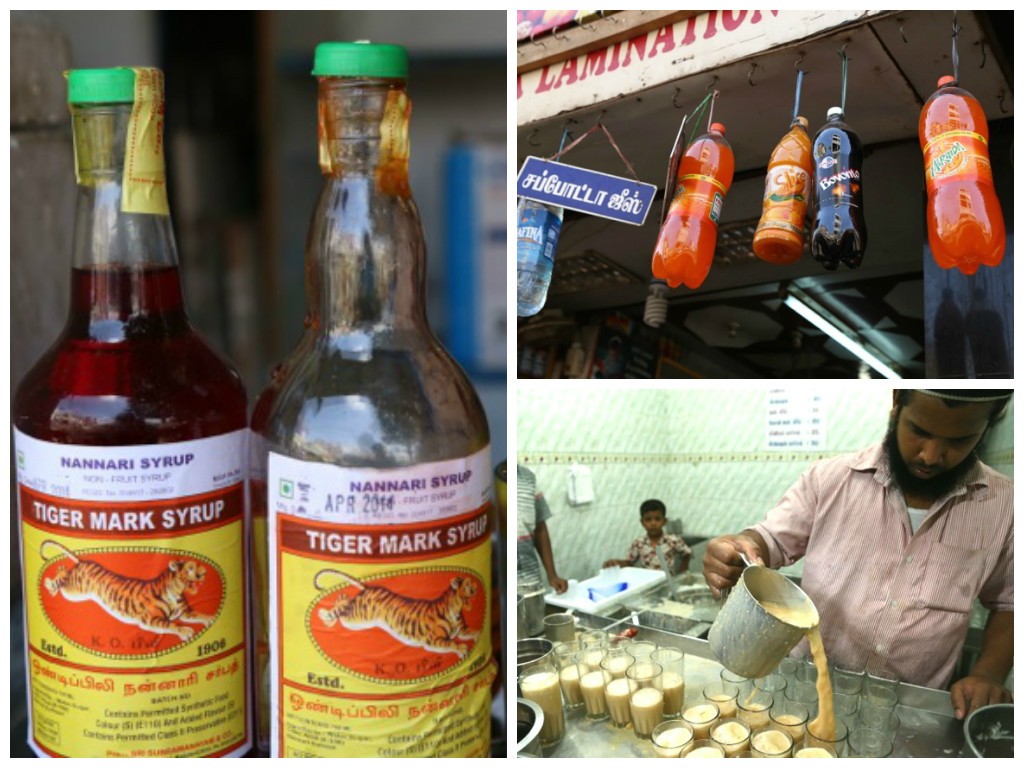 ~ Heritage Madurai once housed the prestigious Madurai Club, designed by Sri Lankan architect Geoffrey Bawa. The extension overseen by Bawa’s disciple Vinod Jayasinghe, preserves the original architectural flavour, which includes rough granite floors and pillars and lush open spaces.
~ Get away from the crowds at the Taj Gateway. Set on Pasumalai hill on the outskirts of Madurai, it offers great views of the city.

~ Explore local street food, including soft rice and millet idiyappam with coconut milk, and paruthi paal (a drink made of cotton seed, sweetened with jaggery with a dash of ginger) with Foodies Day Out.
~ Visit the sprawling Thirumalai Nayakkar Mahal, the 17th century palace of the emperor of the Nayak dynasty.
~ Shop for soft cotton Sungudi saris, made with local tie-and-dye techniques, at Rangachari Cloth Store at South Masi Street. 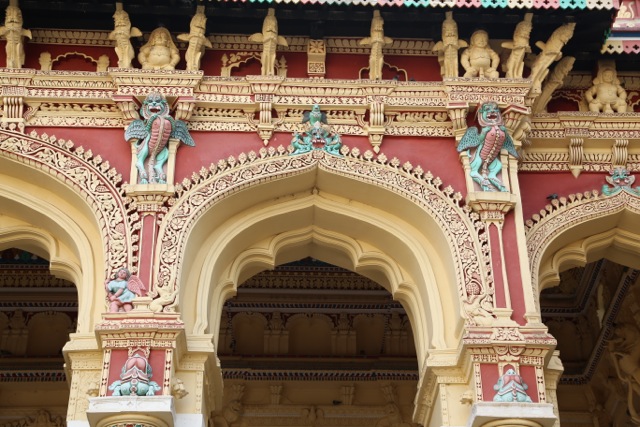 ***
A slightly edited version of this was published in the December issue of BBC Good Food in the ‘Eat Like A Local’ section. Read it in original form here and learn the authentic recipes for local Madurai dishes, including the kothu parotta and kaara kuzhambu.