I shut my eyes to enjoy the sensation of the Röteli going down my throat. The flavours of the Swiss cherry liqueur are new to me, somewhat spicy, somewhat tart, and thoroughly delightful.

It is a warm summer evening in Chur, the capital of the Grisons or Graübunden canton in the eastern part of the country, and Switzerland’s oldest town. The dinner has been a traditional – Grisons meal of Maluns (fried potatoes scraps with applesauce and Alpine cheese), Capuns Sursilvans (stuffed cabbage rolls cooked in milk topped with cheese and topped with cheese), and Pizzoccheri Nero (buckwheat noodles with vegetables, topped with foaming butter).

We have downed several glasses of Swiss wine already, but given the context of the meal, and the town, there is no other way to end the evening but with a glass of Röteli.

This potent cherry liqueur is typical to the Graübunden region, first concocted by the (genius, as anyone who has tried Röteli will heartily agree) Walser community of mountain folk. The original recipe is supposed to be a secret that locals used to (and apparently still) hold close to their hearts, with every family claiming to have the original and the best recipe, handed down the generations through word of mouth. 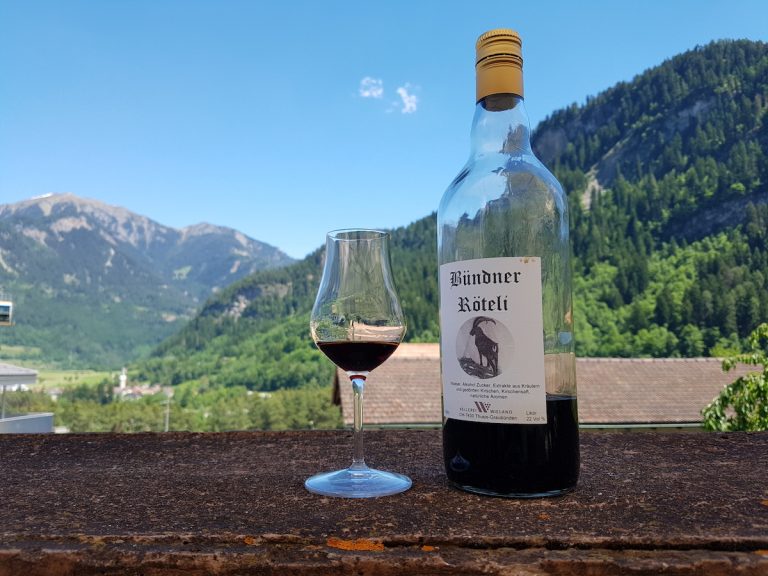 Luckily for us, we don’t have to go far seeking it. The good folk at the restaurant of the Romantik Hotel Stern, where we are having dinner, bring a bottle of the very popular Bündner Röteli to our table. As someone opens the lid, a bouquet of aromas – from slightly bitter almonds to cloying sweet pears floats – into the summer air.

The name Röteli comes from “rote Kirschen”, meaning red cherries. The liqueur is made of a combination of fruit schnapps, dried cherries and various spices like vanilla, cloves, cardamom and cinnamon, all left to ferment together for a few months. The end result – much like wine – is much more delectable than it sounds.

In the olden days, Röteli was considered a traditional New Year’s Eve drink, when young men went from home to home, farm to farm, wishing other families, accepting a glass (oh, if you insist) at each place. At the dinner table, as I take one more sip of this delicious but heady drink, I smile (and shudder) to think of the state in which those young men must have woken up on new year mornings.

A few days later, in another Swiss city, I try Röteli ice-cream for dessert; creamy and sweet, with just the slightest hint of cherry sourness. Not only does it taste like a slice of heaven, but it also leaves me with a mild high. How did I live so far without ever hearing about Röteli?

***
Published in Roads & Kingdoms as “WHICH SELF-RESPECTING SWISS TOWN DOESN’T HAVE A SECRET LIQUEUR RECIPE?”