In Gulmarg this winter, I had my first taste of a Kashmiri wazwan. A vegetarian wazwan. Have you finished sniggering? Then, go on to read about what I ate.

I was staying at The Khyber for a few days in January and on my first night there, I had a wazwan. It was served on the traditional copper vessel called the trami, which the staff opened with great fanfare. 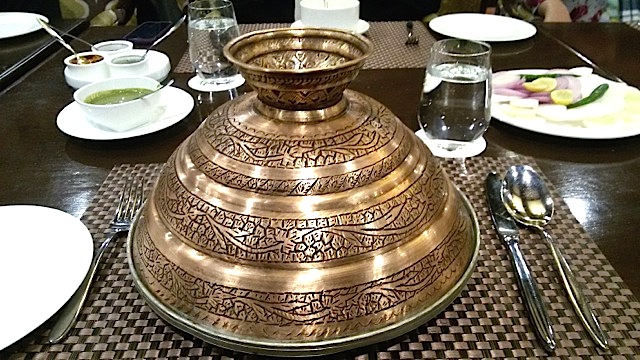 Wazwan refers to a multi-course meal (going up to 36 courses) full of meat, especially mutton dishes like Rogan Josh and Gushtaba. Read more about it here…

My vegetarian meal, its poor and rather unheard of cousin, had these dishes:
– nadru – lotus stem, known as kamal kakdi, which was a new taste for me. It was fibrous and juicy, and I loved it
– haaq – a green leaf, somewhat like spinach, sautéed and mildly spiced
– tamatar chaman – succulent paneer in a tomato gravy
– dum aloo – a dish popular all over India, considered of Kashmiri origin
– kabab – if the wazwan itself was vegetarian, the kabab too was obviously all vegetable and lentils.

All of it was served with a bed of rice in the centre of the trami, and a variety of chutneys (of which the walnut chutney was outstanding). And the meal ended with a dish of creamy phirni – although Kashmiri cuisine does not have much dessert options, this is one of the few sweets occasionally served at formal dinners. 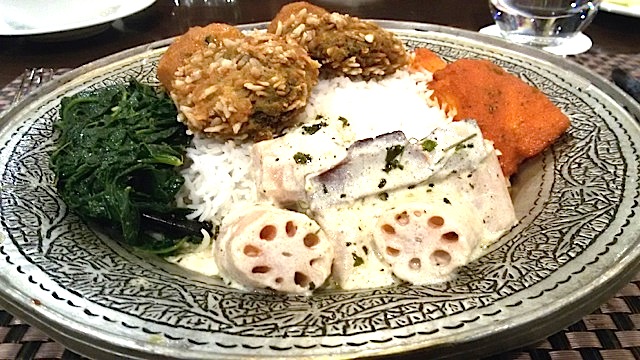 The food at The Khyber was overall excellent, but my absolute favourite was the sweet kahwa served at the Chaikash tea lounge – I had endless cups of kahwa through the day, an absolute delight.

I did bring back some instant kahwa powder, but it just doesn’t taste the same at home. I think I should learn to make it from scratch (friends who do it tell me it is not so tough).

So, is it any wonder that food is a big part of my Six great reasons to stay at The Khyber?

8 thoughts on “My Kashmiri Wazwan”