A few hours into Ljubljana, I find myself coining a new phrase about my experience: treja vu. That feeling that I have seen this all during my earlier travels. To be fair, as the world gets smaller and smaller, there is often a sense of familiarity that afflicts chronic travellers. But Ljubljana — the capital of Slovenia and pronounced “lyoob-lya-nah” — feels so much like other European cities I have visited that I wonder what it holds for me.

For one, there is the river flowing through its heart, the Ljubljanica, with al fresco cafés scattered by its banks. There is even a bridge over it, on which hundreds of locals and tourists have attached locks on the railings (think Pont des Arts in Paris and Ponte Vecchio in Florence). And the architecture is striking and stately, as befits a European capital.

Speaking of buildings, not all of Ljubljana’s are architectural delights. Walking through Miklosiceva Street, just off the city centre, I initially see no sign that I am in a corner of the former Communist Yugoslavia. Then I spot them: the squat, standard issue government buildings dating back to those days. But they are squashed between the stunning, candy coloured renaissance, baroque and art nouveau facades. One of Ljubljana’s heroes is architect Joze Plecnik, who spiffed up the medieval town (working around the ugly buildings) with his signature mix of classicism and modernism. 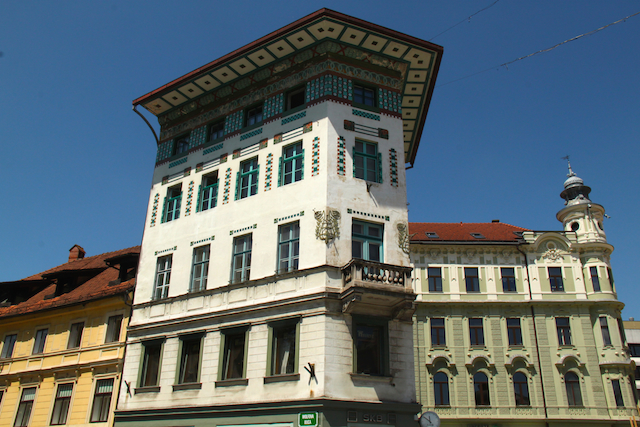 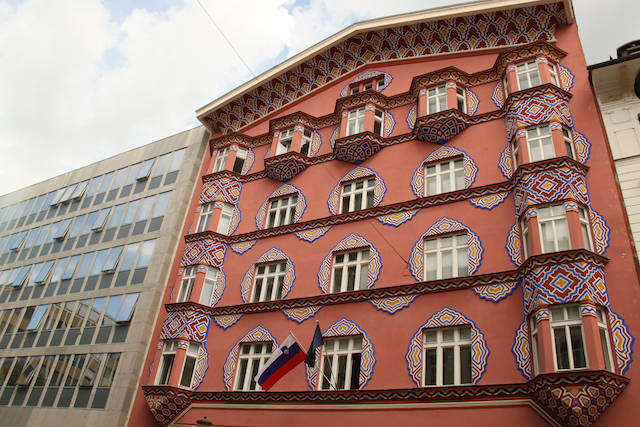 But it is only when I stop at Preseren Square that Ljubljana’s charm slowly sinks in. It is a balmy summer day and locals are out in full force to catch up over coffee and gossip. Like me, other tourists have gathered to watch the street artists serenading passersby with their guitars and drums.

Just behind me is the salmon pink Franciscan Church of the Annunciation, with a statue of France Prešeren in front of it. This square is named after Slovenia’s most loved poet, whose lyrics were adopted as the country’s national anthem. Along with him is his muse and great unrequited love, Julija Primic. How can I not love a city that honours at its very core, not a political, military or religious leader, but a poet? 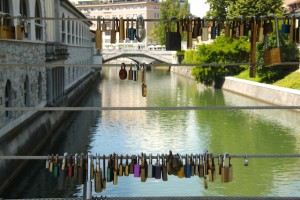 I find Prešeren Square the perfect place for people watching and I sit down with a cone of gelato — Italy is practically next door — to look at the throng of tourists walking on the Triple Bridge, away from the Square into the old town. This three-pronged bridge also owes its unique design to Plecnik, who modified the stone bridge existing from 1842. Down the Ljubljanica that meanders lazily through the city is this city’s bridge of locks, called the Butcher’s Bridge. Unlike the other bridges in Ljubljana, this one is freshly minted. Upon its opening in 2010, this bridge immediately found itself besieged by lovers seeking a bit of luck. Everyday, dozens of hopefuls attach padlocks to its railings and throw the keys into the river. However, I find nothing even remotely charming about this glass and steel structure, with a name that does not lend itself readily to romance.

What is charming, though, is the Dragon Bridge further on, known locally as Mother-in-law Bridge. It just goes to prove that sometimes, humour is universal. This bridge sits with four green dragons bookending it, holding the myth that they wag their tails each time a virgin walks by. That may or may not be true, but as dragons go, these are utterly lovable and have become this city’s most recognised emblems. 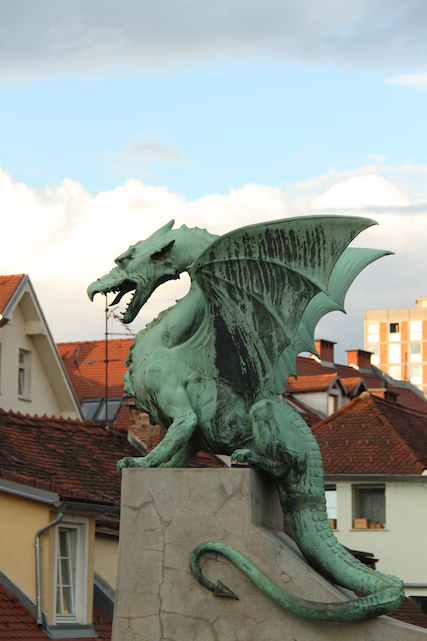 One morning, I cross this bridge over to the old town, all the time keeping a wary eye on the dragons. I am headed to the funicular that will take me up to the 15th century castle. This fortress, sitting pretty on top of a hill, keeps a benevolent eye on the city. Up at the castle, I overhear a tour guide tell his flock that fortifications have existed here since Roman times. Today, not much remains of the old ramparts, but it has been converted into a hub for social and cultural events, with Sundays reserved for weddings.

Most visitors are cooling off with a drink at the café, before the brave-hearted among them head off to climb 100 steps up the viewing tower. That sounds like too much work, especially when I can enjoy sweeping views of the town right from the courtyard. And when I look closely enough, beyond the gleaming spires and russet roofs, I can see one of the dragons winking at me. 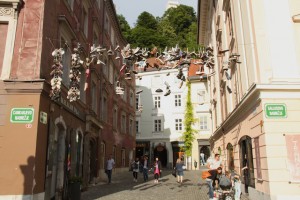 Down in the old town area, tour groups are walking around, stopping for photographs at Robba’s fountain in front of the Town Hall. This Baroque fountain from 1751 is named after its sculptor, Francesco Robba, who took eight years to complete it. Walking around aimlessly here, I am drawn to a rather startling spectacle on one of the narrow cobblestoned lanes: several pairs of shoes are hanging from a wire running between two buildings. Perhaps more talismans for everlasting love? 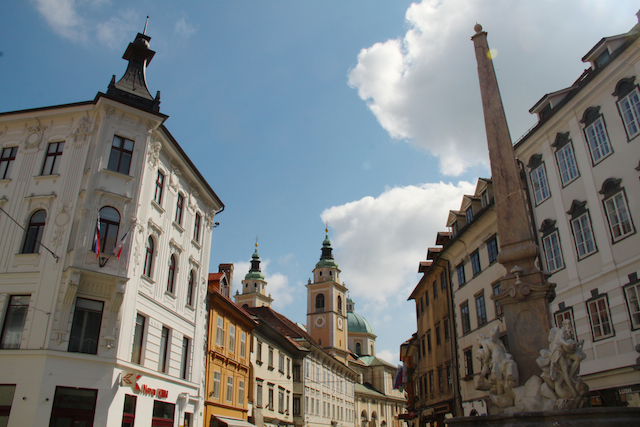 Later on, I go on a cruise on the Ljubljanica and find myself gliding past the grand buildings of the old town, beneath the lovely bridges, into the newer suburbs. It is a beehive of activity out there, with cyclists tracing languid paths and kids playing Frisbee on the riverbanks. An hour later, I step out and sit with a cappuccino in one of the cafés lining the river. I remember reading somewhere that Ljubljana is not a place to see but a place to just be. I agree.

Slovenia was one of the first countries to break away from the Yugoslav bloc and the story of its independence unfolded over a war that lasted for exactly ten days. As the capital of one of Europe’s most recent democracies, Ljubljana has been a city, in the modern sense of the word, for just over two decades. But it packs in several millennia of history and culture. Just last year, Ljubljana celebrated 2,000 years since its initial foundation as a Roman settlement. With a population of less than 300,000, of whom 10 per cent are students, this city hums with a youthful vibe.

Everyone here seems friendly, willing to stop and give detailed directions when I find myself lost, or just suggestions about the best place for hot chocolate (Café Zvezda, if you must know). At the open air fresh food and crafts market between the Triple bridge and Dragon bridge, vendors call out with samples of local soups and stews, while artists smile indulgently when I browse through their wares, announcing that I am “just looking” and not actually shopping. This comes as a refreshing change after the brusqueness of Western Europe; it is only one of the many ways in which Ljubljana feels “same-same, but different” from other places on the continent.

Just as Prague was hailed as the new Paris about a decade ago, Ljubljana is now being feted as the new Prague. I don’t know about that, but it is hard not to fall in love with Ljubljana for itself. Not surprising for a city whose name translates to ‘beloved’ in the local language.