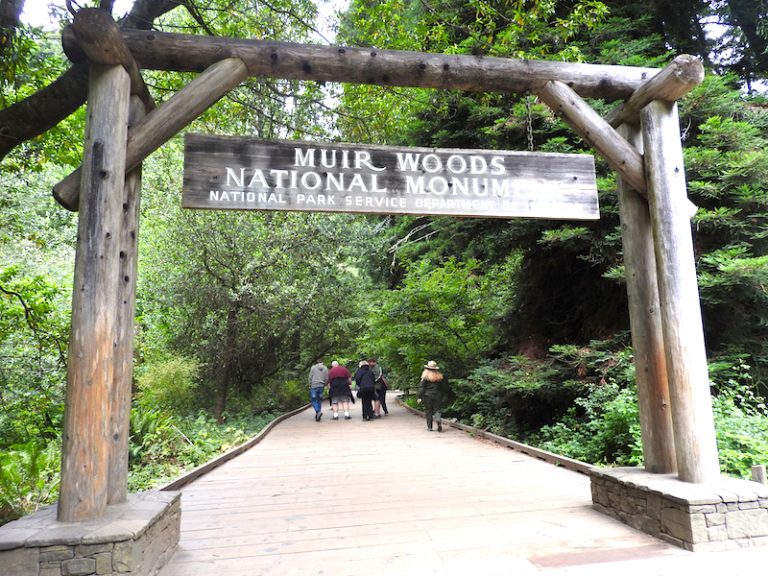 America’s most beloved naturalist John Muir called it “…the best tree-lovers monument that could possibly be found in all the forests of the world.”

Close to San Francisco, just 12 miles north of the Golden Gate Bridge, the Muir Woods National Monument is a primeval forest of coastal redwoods. On my first trip to SF, I knew that I had to visit these woods. I had the time, I had the inclination. The only problem was, I didn’t have a car.

So, I quickly signed up with Extranomical Tours for a visit to California’s wine country – not just Napa Valley but also its lesser known (but equally pretty, as I discovered later) cousin, Sonoma Valley.

This two-day trip included a quick stop at Muir Woods on its way into Sonoma, which was part of the attraction. I would have preferred an entire day at the forest, but hey, if wishes were horses, beggars would fly. And so on.

An early start, we were soon speeding north towards the Golden Gate Bridge, leaving the desultory morning traffic behind. Our driver and guide Mark was a dyed-in-the-wool San Francisco local, who switched on his playlist of SF songs as soon we left town.

And so we found ourselves humming along to hymns to this lovely city: from Scott McKenzie’s dreamy hit “San Francisco (Be Sure To Wear Some Flowers in Your Hair)” to Tony Bennett’s iconic “I Left My Heart In San Francisco.”

Even on that warm summer day, there was a bracing nip in the air, which my tired city lungs were grateful for. This forest of giant redwood trees is said to have a different character in different seasons. I wondered what the woods were like in autumn when the trees changed colour, or in spring when life abounded. But summer held its own charm, everything around me green and fresh. 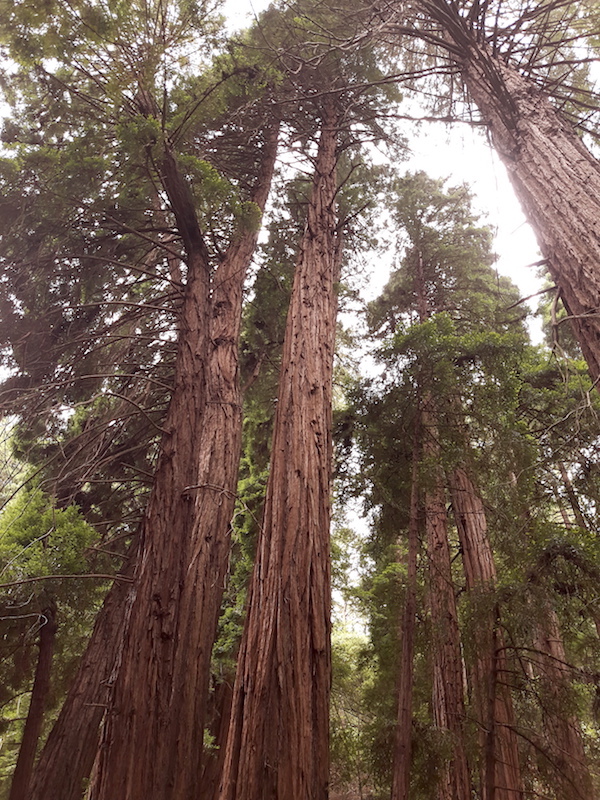 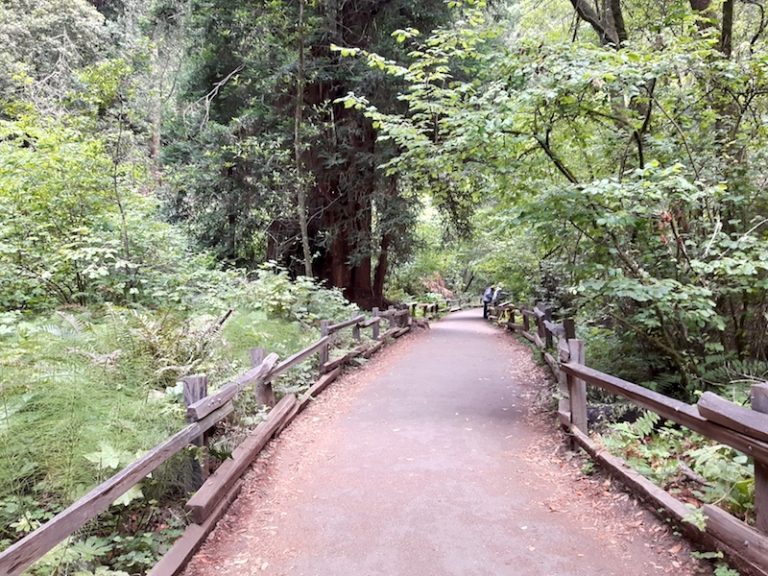 Through my short hike in this Californian Garden of Eden, I kept my neck craned in an attempt to see the treetops, way high above the ground.

Some fascinating statistics on these redwoods:

~ The tallest coastal redwood at Muir Woods is about 258 feet, approximately the height of a six-foot person stacked head to toe 45 times.
~ Further north, these trees can reach heights up to 379 feet, 74 feet taller than the Statue of Liberty.
~ The average age of the coastal redwoods at Muir Woods is between 600 to 800 years, with the oldest being at least 1200 years old. This is still young for redwoods as they can live up to 2200 years. 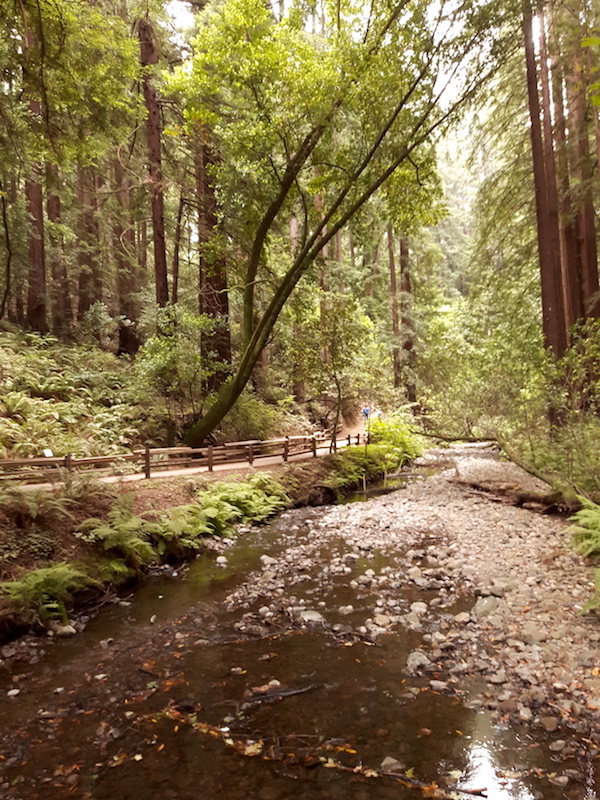 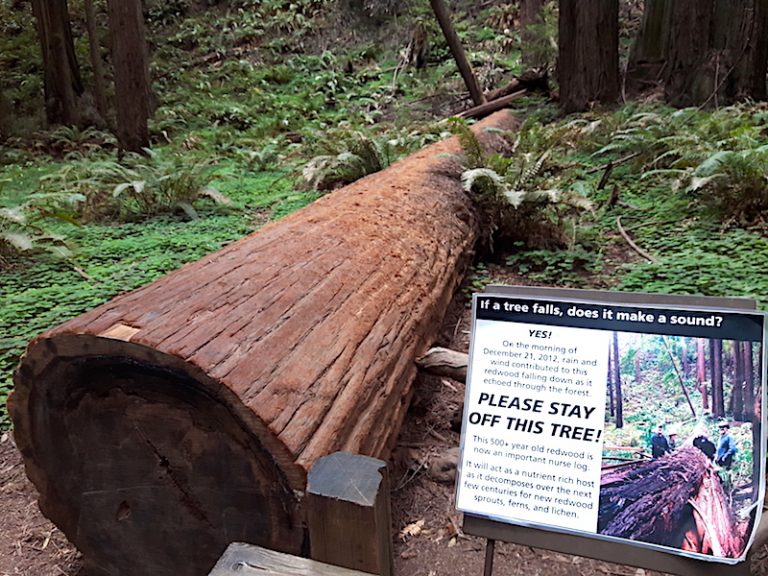 And every moment, I was keenly aware of the fact that I was but a mere speck in the scheme of things in the natural world. As I walked deeper into the woods, I was cloaked by a deep silence, accompanied by a sense of complete calm.

I understood not just the naturalist’s words about these being the best monument for tree lovers, but also why this forest was referred to as John Muir’s Cathedral. 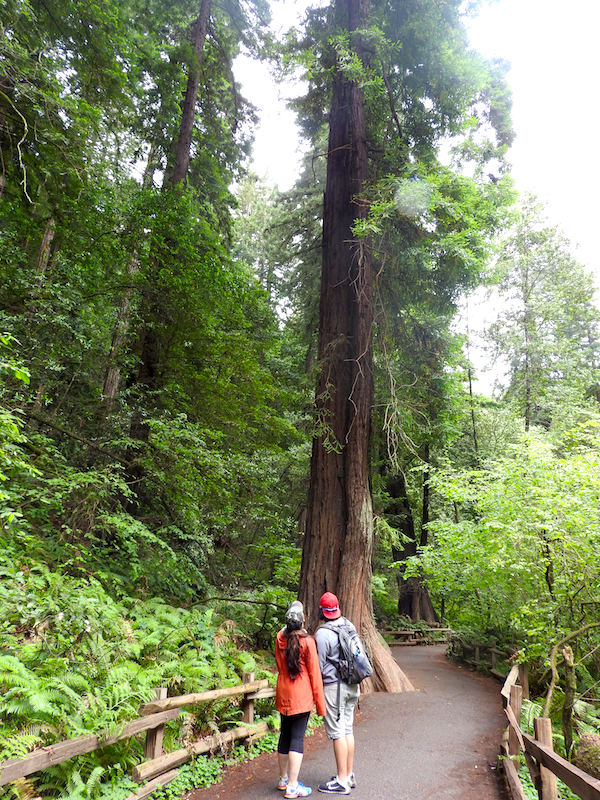 2 thoughts on “A walk in Muir Woods”