My overnight trip aboard Superstar Libra was everything I had imagined and hoped it would be… The idea was to go some place far away from Diwali crackers and the smoke that gets in your eyes and throat and refuses to leave it is time for you to go back to work after the holidays (last minute tense question to husband – they wouldn’t burst crackers on a ship, would they? husband seeing the printed program and answering in a distracted manner – well, they seem to have a Diwali theme party on later tonight… that, that, should have warned me, but never mind that for now). 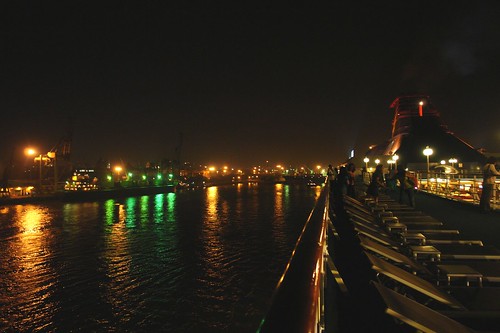 I had hoped to leave behind on shore all stress, forget about work, completely unwind, stare at the water, sleep under the stars… where no mobile signal can interrupt your pleasant dreams with “before all networks get jammed, here is an early diwali wish for you, may your life sparkle like those bright…” you know what I mean. I had also hoped that my husband would not discover his long forgotten sea sickness and decide to throw up all over the place the minute we set sail, Thailand memories still green in our minds (pun intended somewhat, but only if you think it is funny) – (no, he did not – he just developed a fever and a grumpy look as a result, poor man).

Quiet? Did I say quiet? I actually got quite a few things I did not expect. Jain cuisine at all meal times and Himesh rocking through the night, just to name the most painful of those. It turned out that Libra had a truckload of travel agents (SOTC? one of them asked me during the emergency drill that took place in the first few minutes after I got on. What, do I look like SOTC??, I stared in reply) who had been invited for a free ride so they could in turn pass on the PR to their clients. Who, surprise surprise, were mostly the Jain-cuisine-eating, pocketfuls-of-moneyed, Gujarati-loudly-speaking, Himesh-loving variety… They who have the money call the shots, said a wise friend when I cribbed about it the next day.

The first I noticed anything amiss was when I went all the way up to deck 10 (the terrace, so to say) just after we started sailing, in the hope of enjoying a quiet drink. And then the skies erupted – it sure felt that way to me – to the strains of jhalak dikhla ja. The DG, bless the man, a Philipino promising more of the stuff and those pretty young things in small skirts, (one of them Rina, all the way from China) circulating among the crowd which was straining at the leash to get at the poolside barbecue, and pullling people on to the dance floor. At Just chheeell, cheeelll, just cheeeelll… I started to walk away in search of a quieter spot. 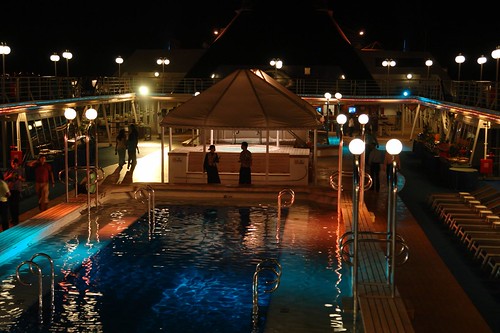 Just to get you to speed on how I got to deck 10, here is the flashback. Superstar Libra has started sailing from Mumbai since last year. We got on the ship Friday evening for a cruise that was to take us into the seas off Bombay and get us back the next day at 2 p.m. We ‘checked in’ rather late, which was just after 6 p.m. for the cruise that was to start at 8. We had a cabin, I am embarrassed to say, at deck 2, which I figured was only slightly above the level of the water, a cabin so tiny that one look at it and we decided that this was not the best thing for two generously built people. We put our combined brains to the problem and finally figured out a way to manage. One of us would lie down on the tiny bunk while the other contorted the body and stood / walked to the tinier loo – which incidentally, has a shower and a hair-dryer and soap / shampoo dispenser and the works. A miniature marvel, that is what it was. And then the other would lie down… Finally, the experience gained from years and years of squeezing in and out of Mumbai locals paid off. (Apparently, there are larger cabins with bathrooms that have bath tubs inside and large windows looking out into the sea on decks above but that is for the seriously rich and the travel agents).

The lift took us all the way to deck 9, with the swimming pool and the jacuzzi tubs and the restaurants and the bars. And also alas! to the DJ and the Himace-bhai and the ultra-cute, namaste, bahoot accha hai female crew. Starters and drinks in hand, we walked all the way to the end of the ship, far away from the noise, where the only sound was that of the Titanic tune hammering loudly inside my head… Hush. And then silence… This was more like what I had imagined. There is no feeling of movement till you look down at the sea and see the ship cutting rapidly through the waters. More exploration took us to the shop (where you can buy Star Cruises souvenirs at unbelievably high prices), the spa and the beauty parlour and the other restaurants and clubs inside the ship. It also took us to deck 4 through which we had entered the ship – where now, a sad little band was playing soulful music. I looked up and was startled – pictures of goddess lakshmi and ganesha all over. And paper, plastic garlands. And two tiny, bright little idols of Radha and Krishna right next to the band. Why? Oh why? I had not noticed all this at the time of entry, as I had been busy trying to avoid being photographed with a couple of extremely brightly and scantily dressed dancers. We ate in peace at the Continental restaurant (which also serves, among things, Jain Continental. Actually I don’t know that – I didn’t notice any sign boards to this effect) which serves a passably decent set meal. We ended up on the dot of 11 at some club or the other for the promised gala diwali party, cheerfully giving the “production show” (what on earth is a p.s.?) a miss. Different DJ, same south east asian girls (having quickly changed from short skirts to silky saris) – chaalo chaalo, come and dance, same music – just cheeelll cheelll. Well, there was a topless “erotic” show on the cards at midnight but I figure my husband and I had the same thought – of south east asian girls dancing topless to aashiq banaya aapne remix – since we did not consider going for that show.

And so went the night… 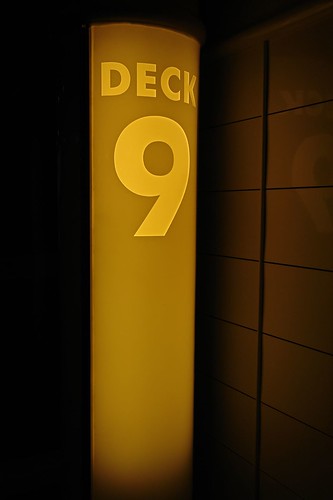 The best part of the cruise for me was early the next morning – I was up at 5.30 and out on deck 10. And for a full 45 minutes, I had the ship all to myself. Not a soul except the man cleaning the deck who smiled and said good morning and left me to my own devices. Coffee cup in hand, I stood at the railings watching the water under the ship, now pitch black, now glittering a pale green in the lights of the ship. Just me and the sea gulls who refused to be photographed. And slowly, slowly, in front of my eyes, first a patch of shy pink, some purples thrown in… and finally yellows and orange. 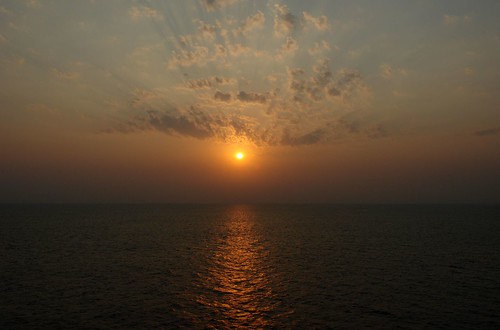 A wonderful half hour in the “hot tub”- jacuzzi – and an exotic breakfast of upma and idli (no, serious – jain idli at that) later, hubby and I found empty deck chairs, pulled them under the shade and proceeded to vegetate. We must have definitely started sprouting roots since we were left alone when all else around us were being dragged in to “exerdance” classes and jackpot tambola games. Such joy. We dragged ourselves out of the deck chairs at noon, went exploring again, duly shopped for Star Cruise souvenirs (hey, there was a discount on them, so there), waddled towards lunch and went back to our cabins to pack and get ready to get off. We had a short wait for the port to give the ship clearance where a man in white shorts came on stage to entertain us and kept asking us in turn to come up on stage and dance. He also kept asking us to crack jokes – but only veg ones please – no, he seriously said that. And then we were on the gangway getting off into the heat and dust of Diwali in Bombay. The end of our first cruise.

In all, a wonderful time, the Hindi remixes and mostly bad food (jain or otherwise) eaay to ignore in light of the otherwise relaxed and pampered feel. Superstar Libra has longer cruises to Goa and Lakshadweep. And my husband and I definitely intend to take one of those soon. And this time, definitely on a higher deck, in a larger cabin. We intend to dress up as travel agents and see if we can wrangle a free ride, if not, well, the money is very worth it.

***
Related post – Some thoughts on – Going local… to what extent? on my Mindspace blog

In a battered Zen along the Karnataka coast – 1 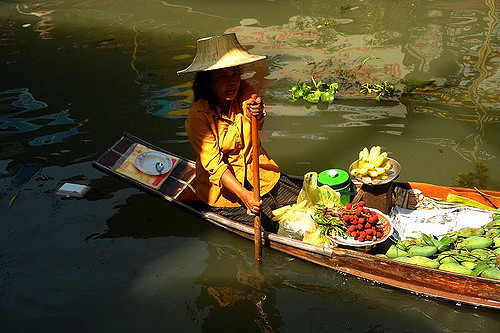 The year that was… 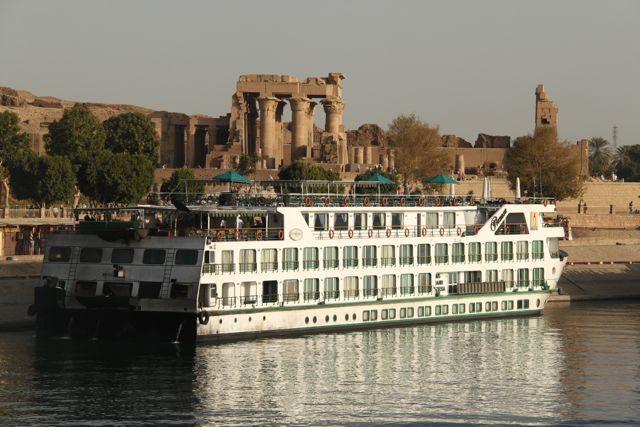 4 thoughts on “Cruising on Superstar Libra”