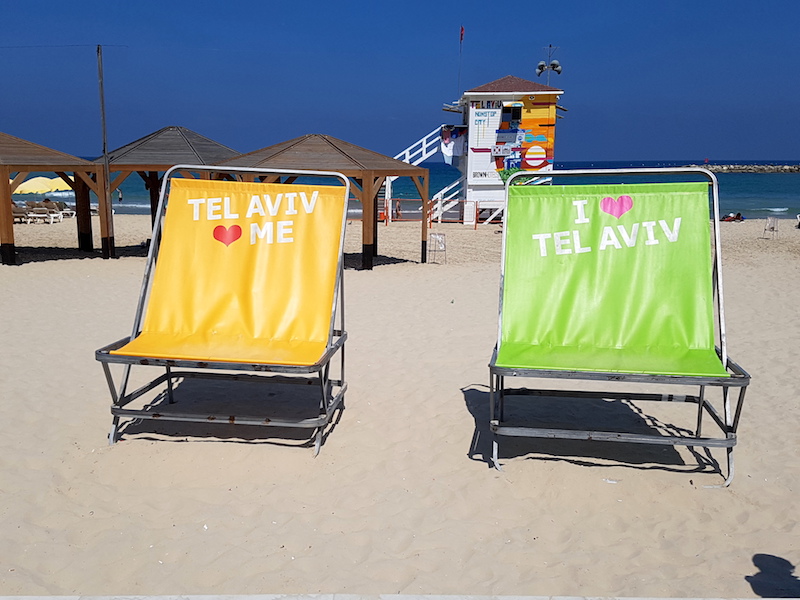 From pleasant weather to great beaches, friendly people to delicious food, Tel Aviv checks all the right boxes that discerning travellers look for. Throw into the mix some beguiling history, eclectic architecture and a vibrant nightlife scene, and it is not surprising why Israel’s second largest city is fast emerging as the party capital of the Middle Eastern region, and a popular a weekend getaway for young and restless Europeans. 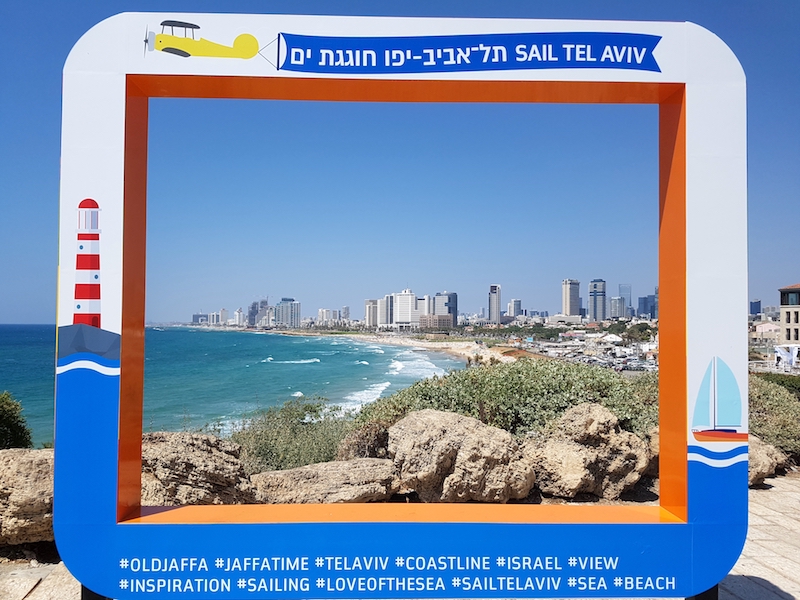 Dip into history in Jaffa 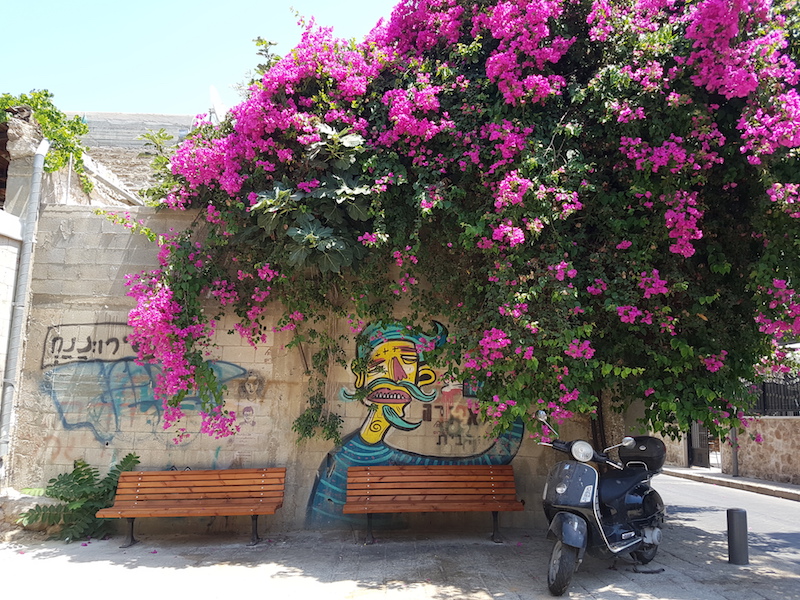 While Tel Aviv itself was founded just over a century ago, the port of Jaffa – originally a separate town, but now a suburb – goes back several millennia and is believed to be one of the oldest port cities in the world. Some records date it as far back as 7500 BC, with a colourful history peppered with Biblical references and Greek legends. Say Boker Tov (Good Morning) to the city by getting lost in Jaffa’s narrow, cobblestoned alleys, with the aquamarines of the Mediterranean always within touching distance. 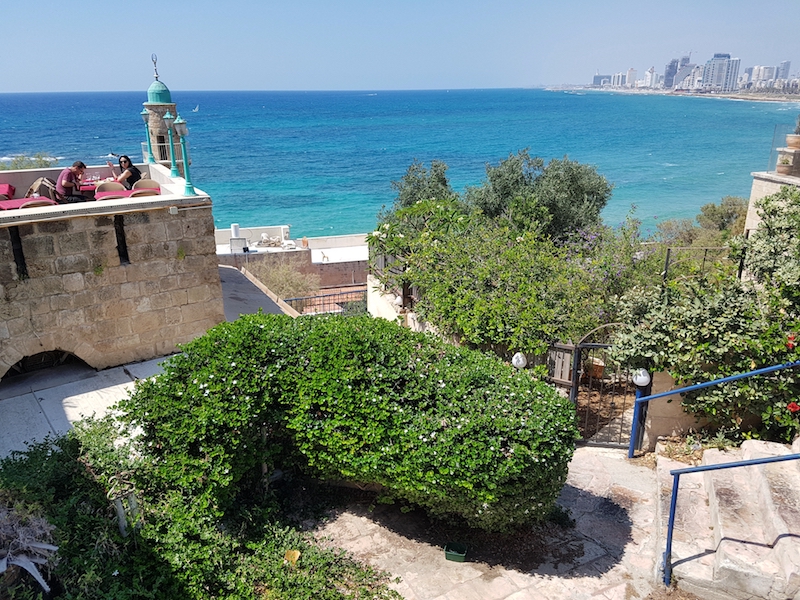 Browse through Shuk Hapishpeshim, the local flea market for great bargains on antiques and bric-a-brac; by night, the area turns into a buzzing beehive of al fresco restaurants and bars that both locals and tourists flock to. For a taste of the truly quirky, drop by the Ilana Goor Museum, a private collection of sculptures, paintings and artifacts, located in a gorgeous 18th century building. 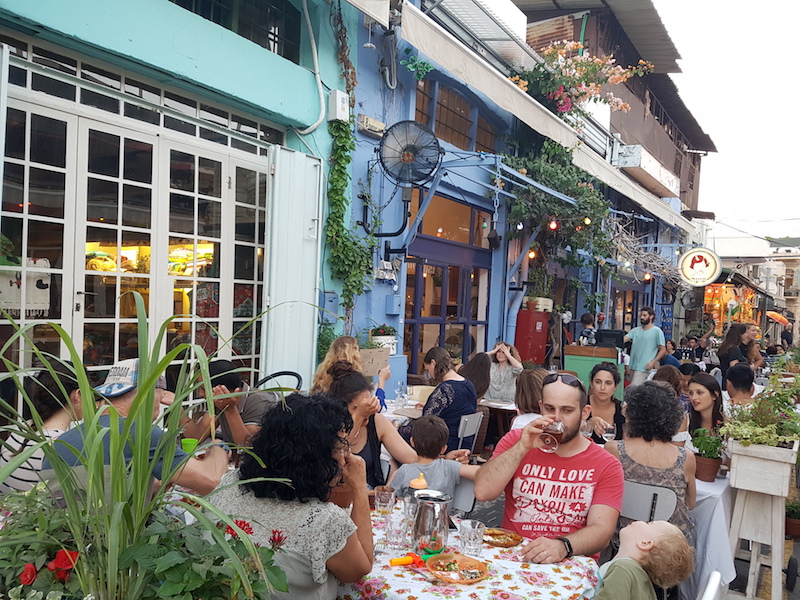 Rothschild Boulevard is known as the Startup Central of this part of the world, the place where some of the most exciting new ideas come to life. Fittingly, this is also where modern day Tel Aviv was born, the very road on which their first Prime Minister Ben Gurion declared Israel to be an independent country in a quick ceremony in 1948. The site, now known as the Independence Hall, is one of the many museums on this broad avenue where offices (and once upon a time, foreign embassies), apartments, bars and cafés sit cheek by jowl. 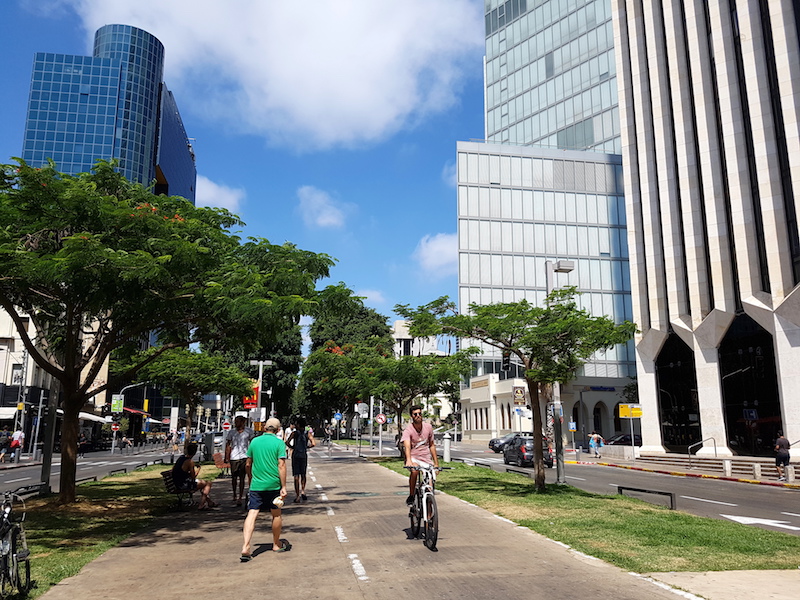 The other significance of the Rothschild Boulevard is the buildings with the iconic Bauhaus style of architecture, designed in the 1930s by Jewish architects trained in Germany. Known for its simplistic lines and functional design, these clusters of white buildings have earned this neighbourhood the moniker of ‘White City’ as well the prestigious UNESCO World Heritage status. For architecture and history enthusiasts, the Bauhaus Centre in Tel Aviv conducts guided walks on Saturday mornings. 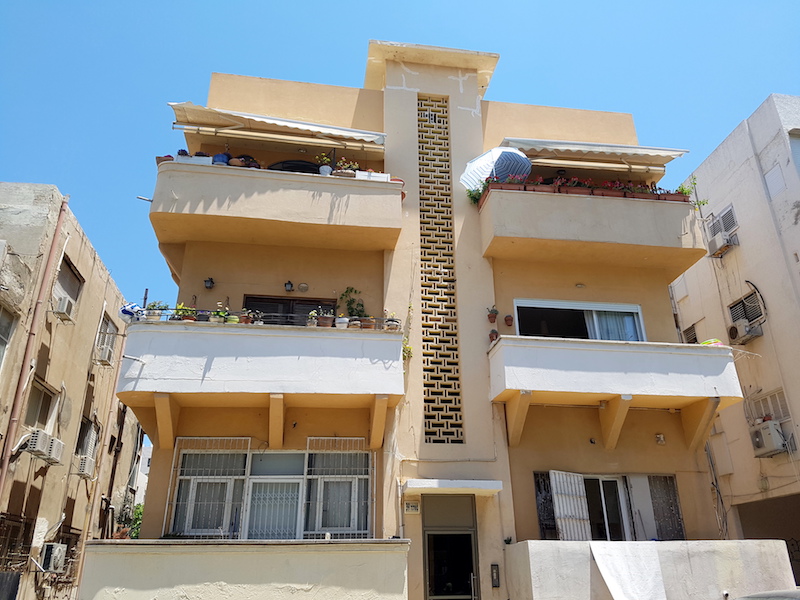 The beach is the throbbing heart of Tel Aviv, its most liberal face and perhaps the single most favourite outing of all locals. There is no dearth of activities on the beaches of Tel Aviv, from makeshift gymnasiums to mobile libraries, from paddling to sailing. 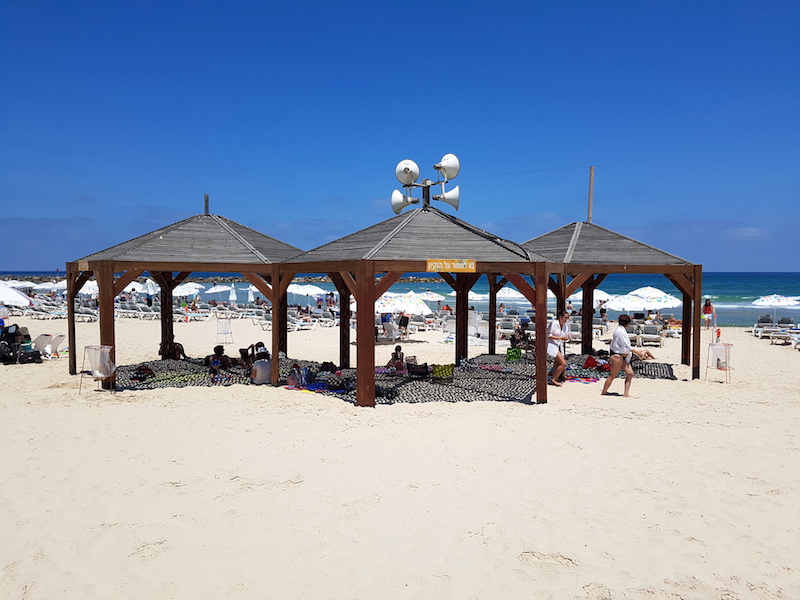 Learn to play the matkot, a popular paddleball game; hire yourself a pair of green wheels from one of the multiple Tel o Fun bike stations across town; or go on a Segway tour of the beach promenade with Elay Cohen, all the way to the old port area, which is now a cluster of cafés and restaurants right by the sea. And if it just too hot for any of these, find a quiet spot on the sand to stretch out on for a bit of people watching. 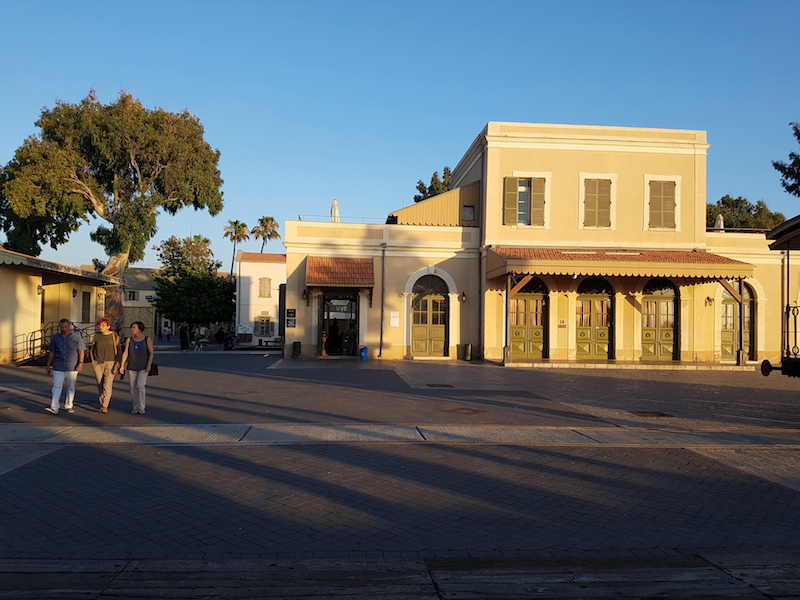 Tel Aviv is a city that constantly reinvents itself, wearing a new coat every couple of decades in the name of gentrification. The Old Jaffa Railway Station – known locally as the HaTachana – is a good place to get an understanding of how this works. HaTachana was built in 1892 as the terminus for the old Jaffa-Jerusalem railway, which shut down in 1948, turning this into a decrepit site for decades. With the Tel Aviv- Jaffa Municipality breathing new life into it in 2010, it is now a vibrant shopping and dining complex close to the beach. It is interesting to see cafés and shops right by the old train tracks and warehouses. 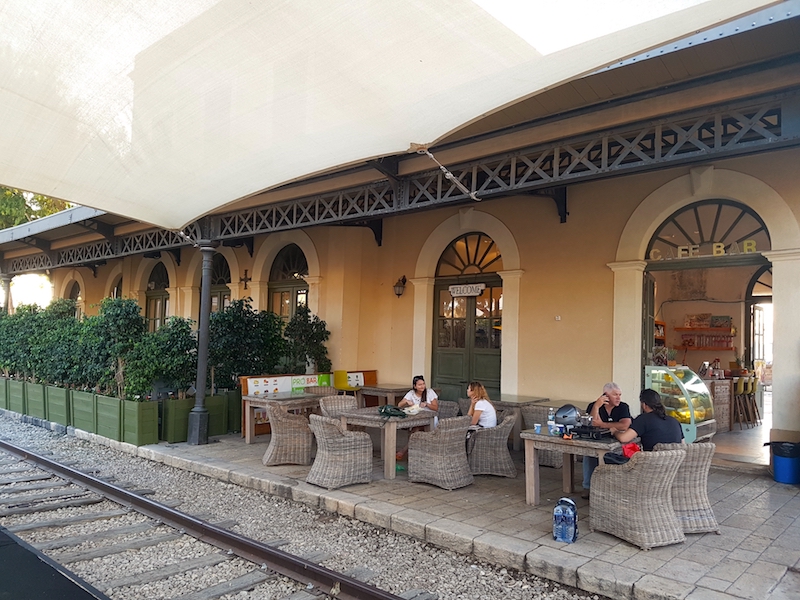 Walk a few steps out of HaTachana into Neve Tzedek, the city’s first Jewish neighbourhood outside Jaffa, created in 1887. Today, it is a trendy urban village, with chic boutiques, art galleries and performing spaces crowding these narrow lanes. The Suzanne Dellal Center in the middle of its quiet square, the home of Israel’s most famous troupe, the Batsheva Dance Company, usually has some dance performance on most evenings. This is also one of the best neighbourhoods to spot colourful street art and signs. 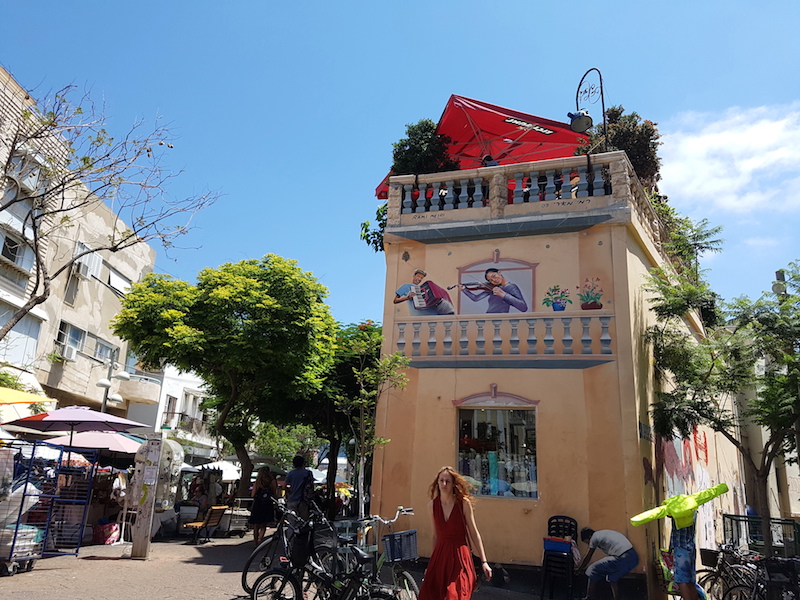 The food in Israel is an amalgam of the flavours of the region, all the way from Lebanon, Palestine, Syria, Jordon and Egypt, with the odd Mediterranean and north African influence added to this interesting east-meets-west fusion. The best place to get a taste of Israel is the Carmel Market, or Shuk HaCarmel, where locals shop for their daily vegetables, meats, sweets, spices and breads.

Friday mornings, the beginning of the Shabbat (the seventh day of the Jewish week, traditionally given over to rest and prayer), are when this precinct really comes to life with the sounds and smells of Israeli (or what is now considered Israeli) hummus, tahini, challah, halva, baklava, kabab, falafel, shawarma, boureka and more at the dozens of street stalls – all of it to be washed down with a sampling of craft brews at Beer Bazaar just down the road. 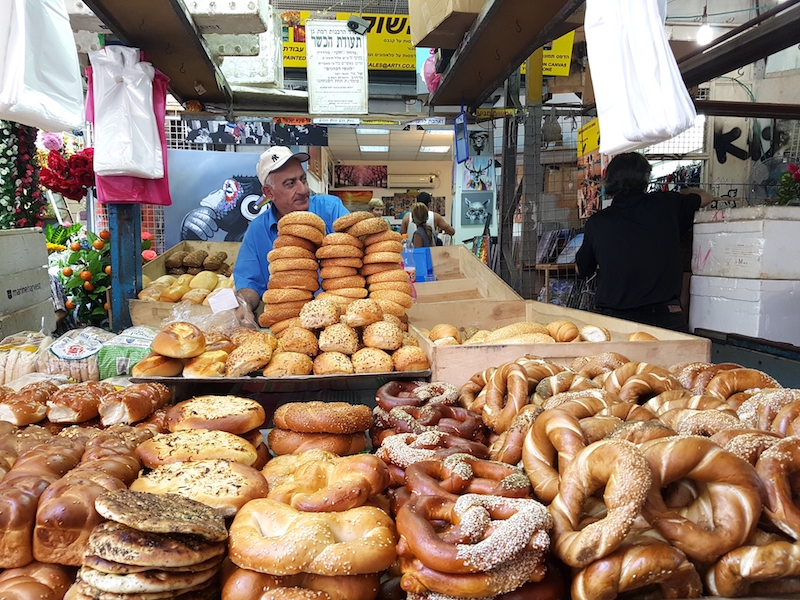 Food Tip: Buy the Carmel Market Bites Card that lets you sample a range of delicacies at various stalls in the market.

This city plays hard into the night, beginning only around midnight and going on well into the morning. While locals claim that this happens through the week, Tel Aviv especially refuses to sleep during the Jewish weekend that begins on Friday evenings. Kuli Alma is one of the trendiest places to be seen in, while Speakeasy is a lovely rooftop lounge with a laidback vibe. Many of these bars and clubs are secret spots known only to canny locals; Dror Shoresh (+972-50-7814575) conducts nightlife tours of Tel Aviv for party animals who want to see it all. 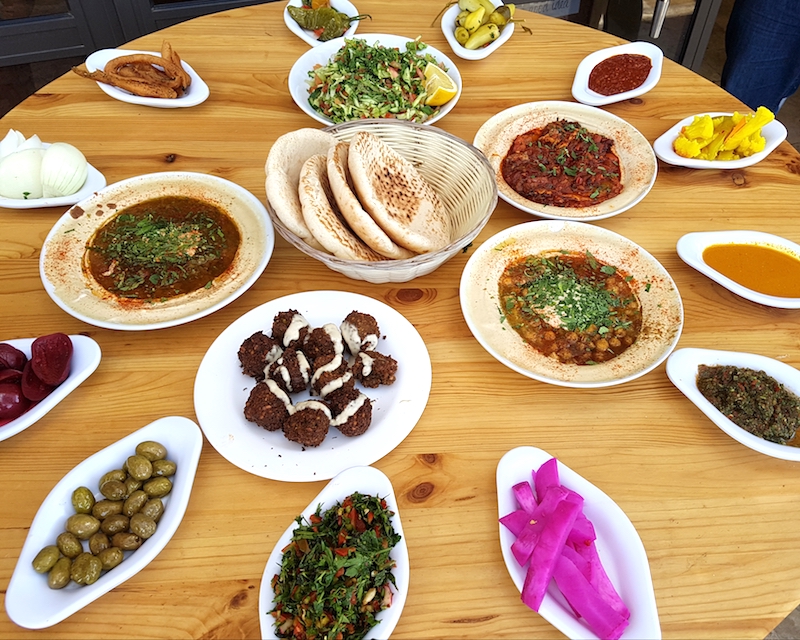 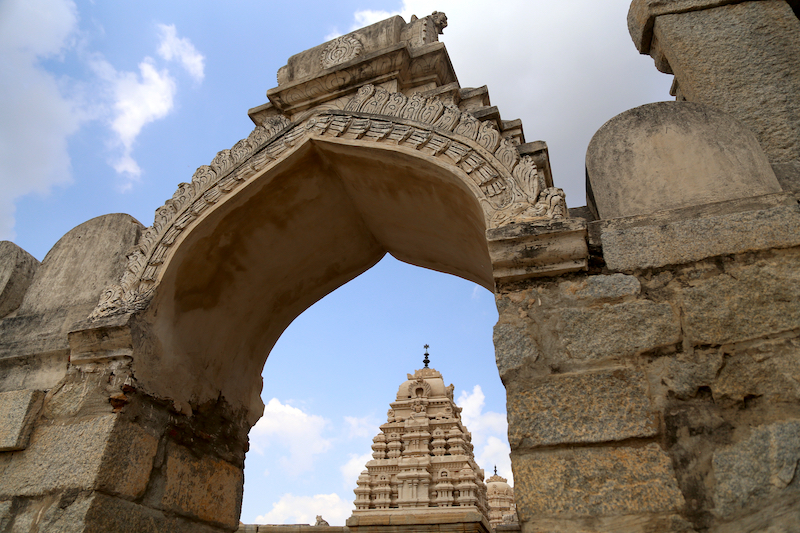 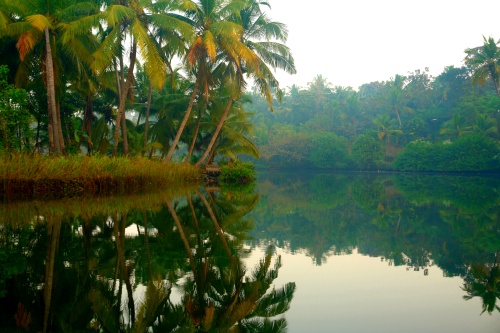