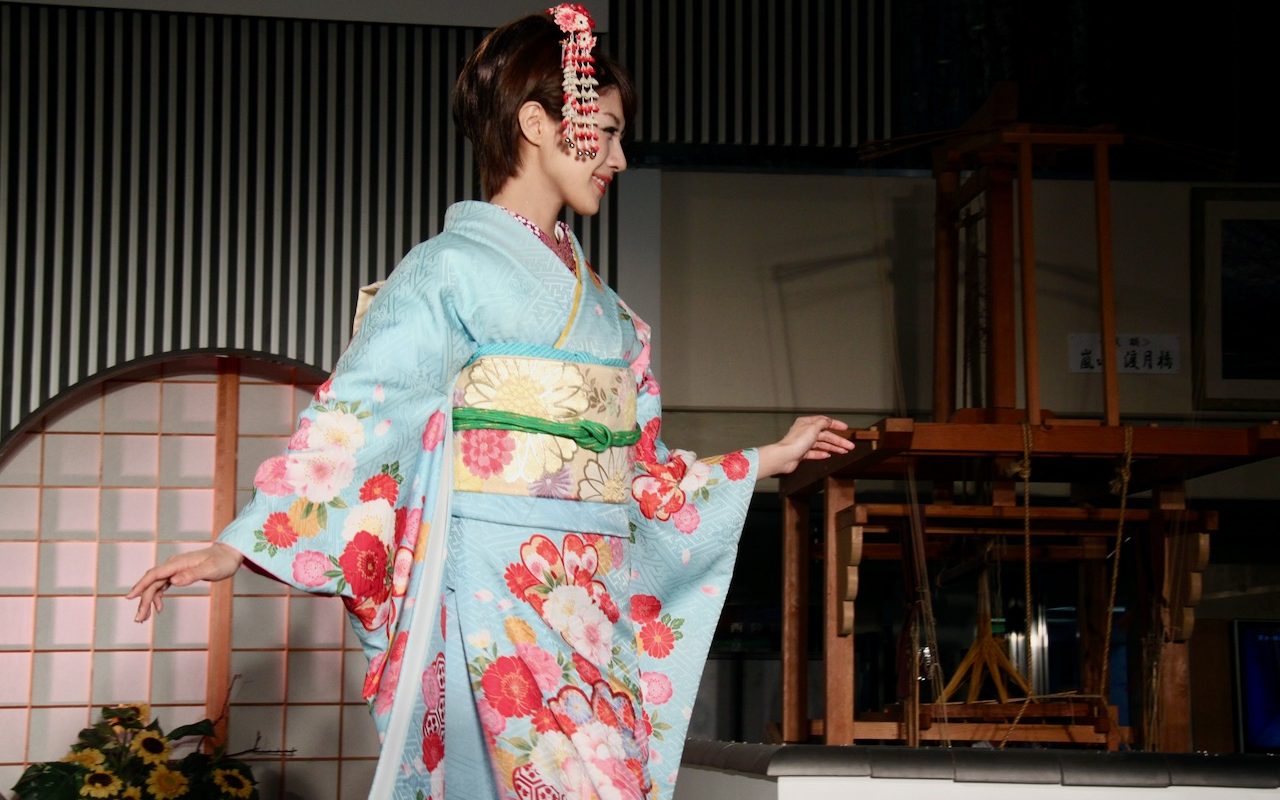 Anywhere you go in Japan, the kimono is omnipresent. It is not, as I had imagined, only a ceremonial dress, or something reserved for festive and important occasions, but worn by women (even kids!) everyday, everywhere.

The first time I saw a kimono, it was draped tight around Asha Parekh who was waving a fan and singing “Sayonara Sayonara” in the 1960’s Hindi movie Love in Tokyo. I remember being fascinated by the flowery dress. When I saw women in kimonos in Kyoto 30 years later, it didn’t seem any less exotic. According to my local guide, even the Japanese now treat the kimono as a special costume, brought out only for formal occasions. It has been this way since the early 1900s, when Emperor Meiji actively encouraged his citizens to shift to Western clothes.

In Tokyo, during a short trip a few years ago, I had the good fortune of seeing a kimono fashion show at an upscale weaving centre. Some of the photos here are from that show, while others are from the streets of Tokyo and Kyoto.

What the kimono symbolises

In keeping with the Japanese preference for straight lines, the look of the kimono is clean and straight rather than fluid and curvy. The sash, called the obi, holds the garment together and contains the curves while flat slippers (called zori) worn with white, toed socks (called tabi) complete the costume.

This garment is worn in layers—the material and colours changing according to the season. In spring, a typical pattern would be that of cherry blossoms while the autumn season would be represented by a pattern of colourful maple leaves.

Also in summer, women wear a thin and comfortable version called the yukata, usually in white or blue. Some symbols are considered auspicious and are always popular like the pine tree (evergreen), white crane (believed to live a hundred years) and bamboo (bends but never breaks).

Bridal kimonos are usually pure white with fine embroidery and with a white headgear to symbolise “covering the horns”—anger— an emotion not suitable for a married woman. For the wedding reception, the bride layers the garment with a more colourful and dressy over-kimono in red.

Seeing modern day Tokyo, it is tough to imagine that once both men and women wore the kimono all the time. Now men wear it very rarely, and only in muted dark colours. And women bring them out for special occasions like weddings, tea ceremonies and funerals.

Custom demands that every family own one or two kimonos in fine silk, with elaborate patterns, treasured as family heirlooms and passing from mother to daughter. A unique family crest is also sometimes woven into these. A new kimono is a must for the “coming of age day” of girls— the second Monday of every January to celebrate girls who have turned 20.

Modern designers have been trying to make it popular again, especially among young Japanese women. So bold attractive prints, bright colours and cheerful accessories (including high heels) are finding their way into the market. And for those who can’t get around this 12-piece garment, professional kimono-draping classes are freely available

Catch Japanese beauties sashay down the ramp in attractive kimonos and elaborate hair-dos. The center conducts kimono shows seven times a day, each lasting 15 minutes and also has an entire floor dedicated to shopping.

Although a kimono is a great gift or souvenir to take back from Japan, superior quality ones are expensive, starting from Rs 1,41, 360 (200,000 Yen). Silk or brocade with embroidery, considered vintage pieces, can go up to Rs 70,7000 (one million Yen). Yukatas are much more affordable and are priced between Rs 2000-3000 (3000 – 4000 Yen). You can buy them at the well-known Oriental Bazaar in Tokyo (5-9-13 Jingumae, Shibuya-ku) and the Kimono Plaza in Kyoto (Karasuma Takatsuji agaru, Shimogy!-ku). If you just want the experience of wearing an ornate kimono (and perhaps having your photograph taken in it), a cheaper option would be to rent them—even locals do it these days. 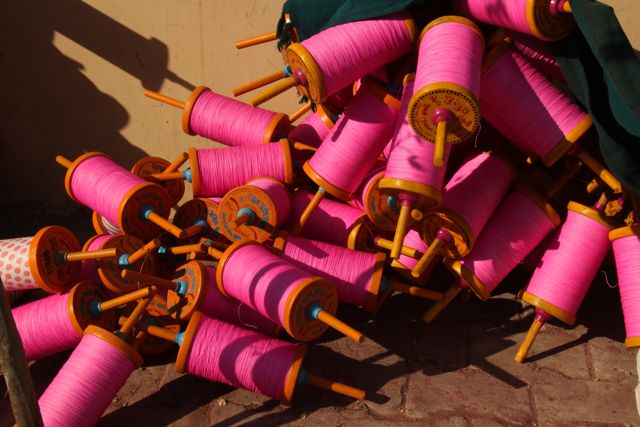 Getting ready for Sankranti

Kids in the Cologne Carnival